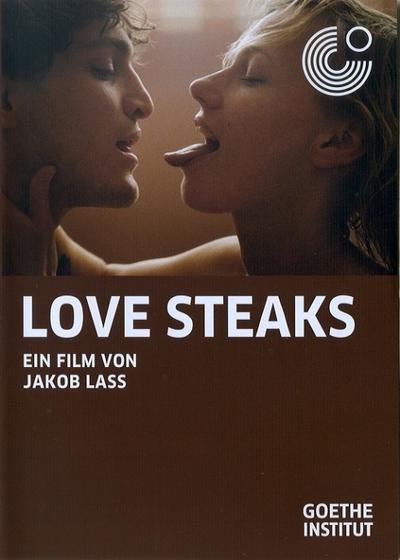 Quote:
If Joaquin Phoenix met Carole Lombard in their twenties by the sea you would get the sizzle we feel in Jakob Lass’ Love Steaks.

Clemens (Franz Rogowski) arrives as a trainee at a Northern German seaside spa. He does massages, aromatherapy, and is being taught how to suck bad energy from the guests by circling his hands above their bodies. Lara (Lana Cooper) is a playful cook in the resort kitchen, constantly initiating acts of mayhem for her colleagues to react to.

As living quarters, Clemens is allotted a spacious storage room at the spa, where laundry carts are kept moving about and unused replacement garbage cans sit ominously. He has no private bathroom – no privacy to speak of at all, as there is no door – but a fabulous view of the ocean. Clemens is shy, sincere and in over his head on all accounts. Lara is bold and sexy-stupid, not in the dumb-blonde romantic comedy vein, rather mad-cap provocative. She seduces with a daring absurdity and her tango with Clemens is superb. Rogowski, a trained dancer, gives Clemens the fragility he needs to balance her shenanigans.

A symbolic burning of a boat and a bit of black magic are part of the romantic mission they set out on with each other.

Love Steaks sacrifices neither the authenticity of the work environment nor the depth of emotional entanglement. The way alcohol is casually abused in restaurant kitchens, sexual harassment complications for spa professionals and the language used to cover it all up, never fade into the background. The comedy shifts and jumps with ease from the wintry beach to the pool and into our hearts due to the acute timing of the performances by the entire cast and the expert editing of Gesa Jäger.

The sound design by Julius Middendorff is accentuated beautifully by Golo Schultz’s idiosyncratic score that accompanies the love battles and provides concurrent commentary. An orderly army of pineapples sways in the back of a car and seduction with the help of frozen meat forges a new way of telling stories.

The movie was filmed in an actual resort with cinematography by Timon Schäppi and, with one exception, the personnel and guests surrounding Lara and Clemens are non-actors. The dialogue is entirely improvised. “The fox never sleeps, it just dozes” warns Mr. Winter (Ralf Winter), a sly supervisor, who catches the unlikely couple taking their own retreat from work. Love Steaks culminates naturally in a misunderstanding with a taste of Romeo and Juliet.

The jury for First Time Fest (Second Time Around) selected the film for its top prize, winning theatrical distribution, and for Outstanding Achievement in Editing. With this unclassifiable film, Jakob Lass and his team have emerged from the mist as new talent to watch out for. They call themselves Fogma.