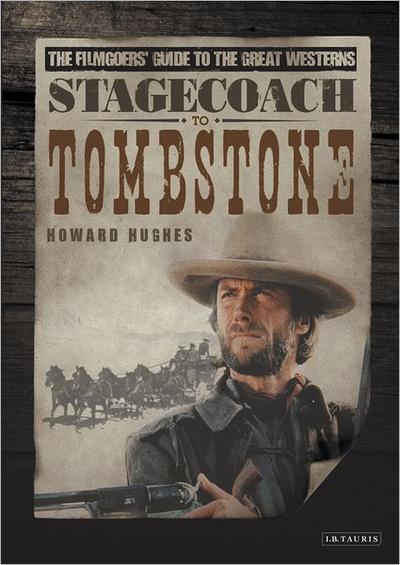 British author Howard Hughes charts the development of the modern Western movie in this insightful, informative volume published in 2008 by Tauris & Company. By examining 27 movies he views as key, Hughes shows the evolving nature of the genre. Western fans are in for an interesting ride since the films range from classics like ‘Stagecoach’ to B-oaters such as ‘Ride Lonesome’ to misfires like ‘One-Eyed Jacks.’

Hughes starts his examination with ‘Stagecoach’ (1939) and ends with ‘Tombstone’ (1993), hence the book’s title STAGECOACH TO TOMBSTONE. In between, he looks at ‘My Darling Clementine,’ ‘Red River,’ ‘She Wore a Yellow Ribbon,’ ‘High Noon,’ ‘Shane,’ ‘Johnny Guitar,’ ‘Vera Cruz,’ ‘The Man from Laramie,’ ‘The Searchers,’ ‘Gunfight at the O.K. Corral, ‘Forty Guns,’ ‘Ride Lonesome,’ ‘Rio Bravo,’ ‘The Magnificent Seven,’ ‘One-Eyed Jacks,’ ‘Ride the High Country,’ ‘The Sons of Katie Elder,’ ‘Once Upon a Time in the West,’ ‘Support Your Local Sheriff,’ ‘The Wild Bunch,’ ‘Butch Cassidy and the Sundance Kid,’ ‘McCabe & Mrs. Miller,’ ‘Ulzana’s Raid,’ ‘The Outlaw Josey Wales’ and ‘Unforgiven.’

Hughes’ book is subtitled THE FILMGOER’S GUIDE TO THE GREAT WESTERNS. When you consider some of the movies covered – ‘Johnny Guitar,’ etc. – you may question that GREAT WESTERNS tag but Hughes makes a good case for why each film is noteworthy. (Hughes apparently compiled his list based on his own observations and lists provided by eight British directors, film editors, critics, authors, etc.).

STAGECOACH TO TOMBSTONE has several things going for it. Hughes uses his examination of each film as a springboard for larger discussions. His comments on Randolph Scott’s ‘Ride Lonesome’ lead into a survey of Scott’s work with Budd Boetticher. The chapter on James Stewart’s ‘Man from Laramie’ dovetails into an examination of all the westerns Stewart made with Anthony Mann in the 1950s and so on. Hughes also possesses an understated wit that surfaces throughout the book. The soap opera plot that underlines ‘One-Eyed Jacks,’ for example, is termed ‘Horse Oprah.’