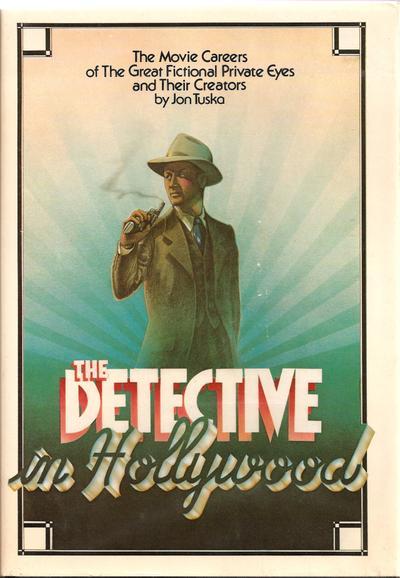 The Detective In Hollywood: The Movie Careers Of The Great Fictional Private Eyes And Their Creators is a fascinating study of classic Hollywood detective movies (and some of the nearly forgotten series like the Crime Doctor and Mr. Wong), based on interviews with some of the men and women involved in creating them (authors, directors, screenwriters, and actors and actresses) like Billy Wilder, Alfred Hitchcock, Leigh Brackett, Barbara Hale, Robert Montgomery, and many others.

From the dust jacket:
“Here is a complete, in-depth study of detective movies in America, written by a man who has been passionately involved with the cinema all his life.

Through extensive research and personal interviews Jon Tuska traces the growth of the detective film from the earliest Sherlock Holmes one-reeler to one of the most recent and important entries, The Late Show. Detective films have always been popular among motion picture audiences. This book presents a lively account of the original authors who created the detectives, the directors and scenarists who brought them to the screen, and the actors and actresses who portrayed them.

Almost every popular fictional detective has sooner or later made it to the movies, and while some authors disliked what Hollywood was doing to their creations, others sought out the many attractions Hollywood had to offer. Many, like Hammett and Chandler, lost out both
ways. As we meet the writers, a diverse and fascinating group themselves, we meet too their “children,” from Sam Spade and Philip Marlowe to Perry Mason, Ellery Queen, Nero Wolfe, Lew Archer, and all the rest who have peopled both our films and novels. Many times an actor’s screen persona overwhelmed his various roles, so that the very different characters of Spade and Marlowe become strikingly similar at the hands of Humphrey Bogart, while William Powell extends his suave Philo Vance creation through his many years as the urbane Nick Charles, and so forth. The depiction of the fictional detective has mirrored Hollywood’s attitudes throughout film history, and we follow his metamorphosis from drawing-room sleuth to armed crusader to pawn standing powerless against organized crime, the government, and affluent society. Once upon a time the detective never lost; in Chinatown, Jack Nicholson’s detective Gittes is the biggest loser of them all.

Fully illustrated, this book is both an important contribution to cinematic literature and an entertaining account of this most exciting genre of American film.

HR scan to searchable PDF – 472 pages
many photos and illustrations