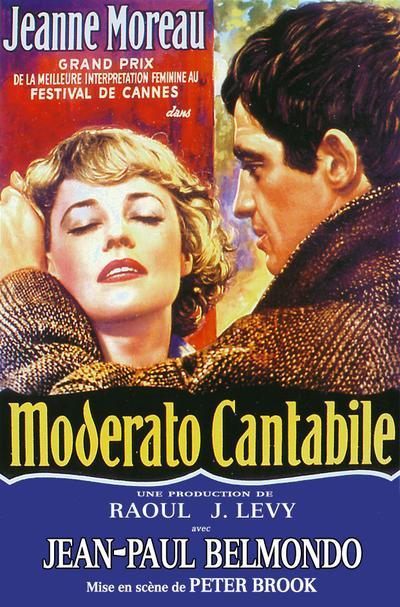 Synopsis:
A wealthy and bored woman is witness of a murder in affection and meets another witness. She asks him about the history of the victim and falls in love with him.

One of those movies that mesmerizes through its restraint, this is set in a dreary coastal small town—familiar territory for French cinema—where Anne Desbarèdes (Moreau) is the beautiful, bored wife of the principal local employer (Deschamps); “No,” she says at one point, summarizing not just the starkness of the place but her own life there, “summer never comes in this region. It’s always windy.”

One afternoon she’s watching her young son Pierre (Haudepin) take his piano lesson from the elderly Miss Giraud (Regis) when his faltering rendition of Anton Diabelli’s Sonatina in F (op 168 #1, first movement indicated as moderato cantabile) is interrupted by a long, uncanny howl of agony. Investigating, Anne and Pierre discover that a man (Valeric) has murdered his lover in a nearby bar, the Café de la Gironde, a place that seems normally a territory open only to men and whores.

Anne catches the eye of one of the bar’s regulars, Chauvin (Belmondo), who happens also to be one of her husband’s countless employees. She asks him if he knows the backstory of the murder, and he tells her he’ll do his best to find out. Although the bar’s owner (de Boysson) tells him that no one knows anything about the matter, Chauvin invents details to impart to Anne: “Maybe he wanted to kill her very early on, from the moment he first saw her.”

Even though it seems Anne’s as aware as we are that he’s fabulating, the two use his tale as the pretext for an unconsummated love affair; Anne is perfectly conscious that her meetings with Chauvin represent betrayals of her husband and indeed of her child Pierre—an infidelity despite the absence of physical contact.

At a dreadful formal dinner thrown by her husband for his business acquaintances, Anne finally cracks . . . . . and makes her escape from the chateau that dwarfs her.

One night, after becoming spectacularly drunk at a formal dinner party her husband’s holding for his business associates and their spouses, she goes to the bar hoping to meet Chauvin and finally take their relationship to the next stage, only to discover that he has decided to leave town forever. He tries to make the break with her gently—”We weren’t able to love each other. That’s how things must be sometimes”—but, when she uses tears and her undoubted allure in an effort to change his mind, he uses brutality instead: “I wish you were dead.” To which she responds, “Now I am.” And then we hear that long, ululating howl again . . .

Moments later her husband, who’s been searching the night streets for her in his car, arrives to take her back to her comfortable prison, the dehumanizingly grandiose château that she has clearly come to loathe. Although Chauvin told her, just before his departure, that she’d eventually find someone with whom she could escape it, we know she’ll never again find that courage.

This was Peter Brook’s second movie, coming seven years after his first, The Beggar’s Opera (1953); it’s surprising that it seems largely to have dropped off the radar, especially since it brought Moreau the Best Actress award at Cannes that year (shared with Melina Mercouri for Never on Sunday [1960]), with Brook being nominated for the Palme d’Or. It features also an exceptional performance from Belmondo, gloriously miscast and rising to the challenge: instead of his customary extrovert swagger we have here a rendition of great restraint (that word again). Both the main players deal adroitly with a very literary, often quite lyrical screenplay that might otherwise have seemed too bookish. There’s good support, too, from de Boysson and especially Haudepin; the cute little boy of Moderato Cantabile would go on to become a fairly significant figure in French cinema, not just as an actor but as a producer and director.

Thirard’s cinematography is perfectly attuned to the movie’s tone of quiet despair, of the silent rail against futility that Anne has made her lot. For the most part it’s crisp, reflecting the barrenness of the surroundings and Anne’s emotional palette, but on occasion—as when the two lovers travel separately by ferry to an unacknowledged tryst and we see what they see from the deck—the edges are softened, giving an effect that’s not so much romantic as lonely. There are also some very eloquent slow pans, as the camera glides with what seems a dreamy thoughtfulness before settling patiently on its next object of attention. The music, too, reinforces this mood, comprising solo piano pieces drawn from the Diabelli sonatina and similar sources. As an example of the two working in tandem, try the pan along the terrace of the Desbarèdes château soon after the 40-minute mark.

There’s an understated subtext in places to the effect that the French got rid of one aristocracy only to replace it with another, and this seems to come to the surface in the movie’s most elaborate scene, the formal supper at which Anne gets steadily more plastered. It’s clear from the body language of the score or so guests, as they try to cover up with chatter their embarrassment over Anne’s wistful/genial drunken utterances, that M. Desbarèdes is most decidedly a lord of sorts, even if untitled; when Anne lurches from the room to say a sort of farewell to Pierre before going out into the night in search of Chauvin, she’s wrenching herself not just from her husband but from the arms of the privileged, a princess running away with the stable boy.

A movie that’s likely to remain in the mind for a long time, one of the great romantic movies, and all built on such a deliberately slight plot.