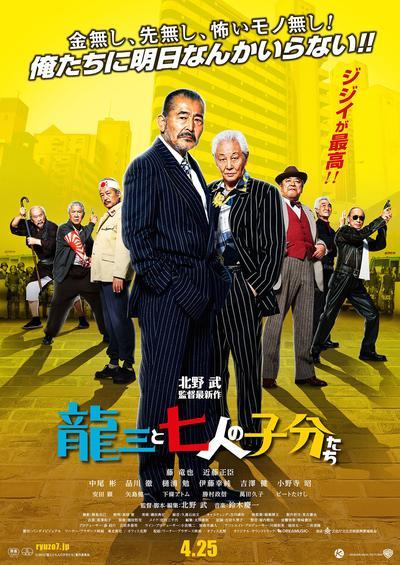 From hollywoodreporter.com
To the many ways in which the career of Japanese auteur and action star Takeshi Kitano resembles that of Clint Eastwood, we can now add another: Both have made the increasingly obligatory geezer-comeback film. It was retired astronauts in Eastwood’s Space Cowboys; in Kitano’s Ryuzo and the Seven Henchmen, we get yakuza who hobble out onto not-so-mean-anymore streets attempting to regain their fearsome reputations. A bit sillier than it needs to be to earn the laughs it winds up getting, the likeable picture (which got a Japanese release in April) isn’t colorful enough to reach beyond the director’s established fan base here. Of those who follow Kitano, some will lament his small role onscreen.

Tatsuya Fuji (In the Realm of the Senses) is the star here, an old man who retains some Mifune-style cool despite now being dependent on his rule-following son for support. After being fooled by some small-potatoes scammers who are affiliated with a new breed of criminal (whose diversified crimes feel more like corporate strategy than mob rule), Fuji’s Ryuzo starts longing for the old days, when he and his buddies were feared throughout Tokyo. Hanging around old haunts with another retired criminal, Ryuzo decides to have a little reunion. Kitano has fun with the introduction of each character, showing stylish faux-vintage footage of each man’s vicious exploits before cutting to the withered or buffoonish oldster he has become. Too buffoonish, in some cases: Mac, for instance, is a Steve McQueen freak played with one-joke flakiness by Toru Shinagawa; the continual bumbling of Akira Nakao’s Mokichi makes sense only as a way of pushing the plot along.