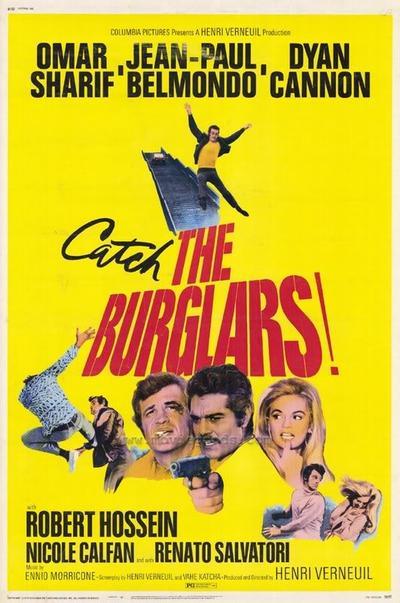 Quote:
Comments :
Henri Verneuil’s The Burglars has a bit of a cult reputation for an infamous car chase through Greece – fully deserved for that lone, incredible sequence – but more than thirty years since its theatrical release, the flaws in this second attempt at adapting David Goodis’ novel to the big screen are painfully evident.

Clearly aimed at the global arena, the casting was meant to please British, French, and American markets, and Dyan Cannon’s presence as an idyllic love interest fuels interludes of roguish charm with gleefully overconfident Jean-Paul Belmondo. In Burglars, her third-billing is merely a billboard lure, since her handful of scenes restrict the grinning actress to short moments of Belmondo bar chatter, a brief exterior scene, and a slap-around session that’s part of Verneuil’s weak attempt to add classic crime conventions to a film already hampered by an opening heist larded with fantastical Bondian gadgetry. (If the clock is ticking, carting a chrome-polished gizmo on site with all kinds of knobs, buttons, and paper insertions is an invitation for easy police arrest.)

It’s a hit and mostly miss production, though Sharif – clearly relishing his chance to incinerate the last traces of his matinee persona – is delightful as the corrupt top-cop able to chase Belmondo through the streets of the film’s undefined Mediterranean city with impunity, and avoid killing a single gawking bystander. (Sharif really began to radicalize his image in 1968 by playing the double-crossing slimeball in J. Lee Thompson’s similarly bloated, but way more fun western suspenser, MacKenna’s Gold.) Sharif’s scene in a grainery is often cited as a classic depiction of cruel (but deserved) irony, but his best moment involves a casual game of bullseye, testing marksmanship against mounting intoxification.

The cited car chase (ah, the legacy of Bullitt) is another prime example of some first-rate stunt driving, and Verneuil makes sure the mounting speed, screeching tires, and vehicular trauma are conveyed from myriad angles – with plenty of shrapnel flying off in every direction. Just as memorable are Belmondo’s actual stunts, which include an outrageous chase atop moving cars and bus; and one stunning shot that has the film’s star falling away from the camera and down a treacherous hillside (hence the film’s catchy poster art) before he bounces another few meters into a dusty heap. Those moments alone make the film worth a peek, but the lack of any meaty story – wrapped up in the shorter, original 1957 Columbia film, The Burglar, with Dan Duryea and Jane Mansfield – makes it a tough journey.

Alpha Digital’s DVD boasts an anamorphic transfer of a widescreen print, but it’s a pretty beat-up copy that the discs’ producers have used. The opening titles still lose content at the edges, and there’s nasty scratches plaguing the first reel. The colours also fade and shift in certain reels, and the print sharpness is unbalanced. It’s still the only way at present to see the film in its huge ‘scope ratio, but Claude Renoir’s elegant cinematography won’t be dignified until Burglars receives a proper DVD release.

Some great sequences, but pretty tepid.