Nicolas Provost – L’envahisseur AKA The Invader (2011) 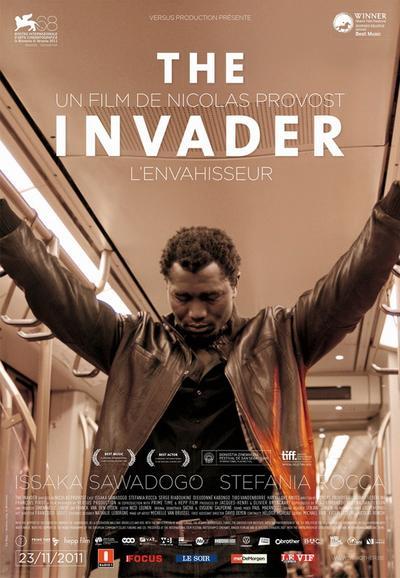 Quote:
Belgium short filmmaker and visual artist Nicolas Provost brings his compelling and assured 2011 debut The Invader (L’envahisseur) to the Edinburgh International Film Festival. Acting as a refreshingly unbiased examination of illegal immigration and asylum seekers, Provost’s film is a surreal and demanding drama build around a sublime central performance by Issaka Sawadogo.

Washed ashore on a Belgium nudist beach, Amadou (Sawadogo) quickly finds himself working on a construction site for a repugnant foreman who lines his pockets with the money he saves from hiring illegal immigrants. Amadou is working double shifts to cover the costs of his ailing friend Sioka (Ken N’Diaye). However, after a surprise police inspection results in Amadou and his work colleagues fleeing the building site, he returns to find his friend missing – presumed murdered. Driven by a mixture of anger and murderous revenge Amadou takes to the streets of Brussels, quickly finding himself lost and alone amongst the cities predominantly white population. He soon becomes fixated with a kind hearted businesswoman, yet her generosity is misinterpreted, culminated in a passion fuelled, self destructive spiral of events which see Amadou’s kind-heartedness transform into something far more barbaric and irrational than originally seemed possible.

Opening with a lingering shot of a woman’s vagina as she basks in the sunlight, before panning back and following her naked form towards a group of refugees washed up on the beach, it’s clear that The Invader is not your traditional gritty slice of social commentary. This unconventional opening scene (perhaps a crude metaphor for the perceived paradise of European countries to asylum seekers) is followed by some utterly spellbinding opening credits, which effortlessly set out the stall for this aesthetically extravagant film.

Despite Provost’s sumptuous imagery, Amadou’s transformation happens all too quickly to resonate effective on a basic human level and its clear this emergent director is struggling to combine his beautifully rendered visuals with the narrative hooks required of a feature length film. Thankfully, the constantly engaging presence of Sawadogo as The Invader’s mysterious protagonist slowly crumbling under the mental strain of his predicament keeps the audience riveted throughout.

Incredibly oppressive, yet undeniably provocative, Provost’s debut is a strikingly assured tapestry of European social criticism carefully sewn together with a rich visual shimmer. Combine these conflicting elements with a penetratingly beautiful score that successfully amplifies the film’s heightened emotions whilst creating a tense, unavoidable ambiance of depravity and you have a film rich in sensory delights but ultimately lacking in dramatic sensibilities.

The Invader is a sumptuous portrait of asylum seekers that, whilst void of any tangible clarity, remains a thoroughly gripping and technically tight film.