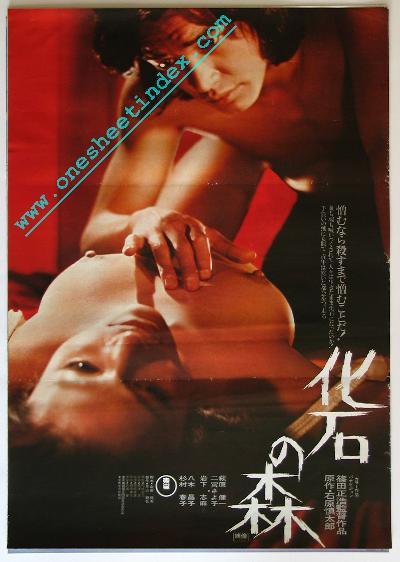 Review:
One day, a young medicine student Hauro Himoto (Ken’ichi Hagiwara) runs into his attractive ex-schoolmate Eiko Izawa (Sayoko Ninomiya) and they fall in love with each other in no time at all. The only obstacle which intrudes the couple is the owner of a barbershop who simultaneously is her lover and her employer and pesters Eiko out of his jealousy. Hauro and Eiko resolve to get rid of the insufferable male so that they can remain together without further complications…

The Petrified Forest is one of the least known films by the great Japanese director Masahiro Shinoda whose interests encompass soullessness of post-war Japan as well as clashes of Western and Eastern cultures. Whilst he scrutinises the latter topic in his enchanting Silence from 1971, in case of The Petrified Forest, the former issue constitutes the main theme of the psychologically and visually stunning piece of psychological drama which enthralls with its brilliance. The movie is initiated with a large shot framing a snowy landscape filmed by a superb cinematographer Kôzô Okazaki who imbues the celluloid with Shinodesquely chilly tints and one is likely to sense the coldness of the panorama. Picturesquely promising as it may seem, it is only a prelude to this very austere and morally disquieting material which successively proceeds to a more urban milieu in which the action takes place. Shinoda exposes through this flick his storytelling flair which renders The Petrified Forest so insightful and succeeds in combining many subplots without becoming exorbitantly intricate or superficial. The main character – Hauro – is a young medicine student who leads an abstruse relationship with his mother who previously left his father for her beloved one. Hauro appears to be resentful and does not want to have anything in common with her anymore. Once Hauro infatuates with Eiko, he grows involved in a sinister labyrinth of emotions which he ultimately fails to harness. The climax of The Petrified Forest is uncannily bleak and it is genuinely captivating how aptly Shinoda unfolds the tale as well as the cruelty and lurid impulses dwelling the hearts of the protagonists who cannot cope with family nuisances. Likewise, Shinoda indicates that the true love can only be constructed on compassion and reconciliation, not on violence and hatred which entails solely annihilation and destruction. Last but not least, one of the motifs constrains a viewer to ponder on perchance consequences of depending just on science, purely a creation of humans, and totally discarding religion and ethics, thus, it is something which may be also disclosed in a cinematic discourse of Akira Kurosawa.

The acting in The Petrified Forest is neat, but it is not one of the biggest benefits of the film which is generally elevated by its story. Ken’ichi Hagiwara is good as Hauro, but a word “competent” seems to be more adequate as far as his performing is concerned. The same case is with Sayoko Ninomiya who is pretty, never memorable though. It is propitious to behold Haruko Sugimura’s dose of subtlety as Hauro’s mother. Sugimura is known for her roles in Yasujirô Ozu’s Tokyo Story and Late Spring.

The cinematography of Kôzô Okazaki, who worked on Kobayashi’s Inn of Evil and Shinoda’s Buraikan, is compelling, but far from flamboyant, rather grey which is quite distinctive for Shinoda’s opuses. Despite extreme actions transpiring on the screen, the camera remains impassive, nonchalant and remotely observes this sterile décor inhabited by inconsolable spirits. The further the movie creeps, the more portentous it becomes owing to progressively darker and darker palette of colours which endow the effort with perturbingly sinister appearance. The soundtrack by the phenomenal Tôru Takemitsu belongs to his very best compositions and consists of some delightful jazzy scores as well as those less conventional ones which reverberate with dripping water and traditional, ghoulishly sounding flutes which contextualise with the ensemble very agilely.

It is eerie that such an engaging work of this genteel Japanese director remains so obscure and virtually forgotten. It cannot be denied that The Petrified Forest does not implicate any drawbacks, nevertheless, it is very close to cinematic magnificence of Shinoda’s more distinguished motion pictures. One of the foibles stems from the fact that the characters are written in a better manner than they are acted. Apart from that, the second half is deprived of the force of the first hour and the material ultimately feels a little too languorous, yet I am certain that patient viewers shall not mind the slow pacing of this otherwise poignantly crafted pic which in spite of being little-known, prosperously conveys an astoundingly mature and ripe tale shrouded in a veil of human despair.