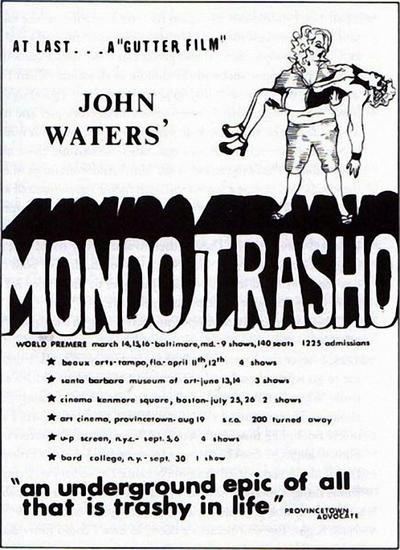 A few excerpts from 1000misspenthours.com:
” In the meantime, what we can do is to revisit the moment of transition between Waters essentially making movies on a lark with his reprobate friends and the Dreamland Studios team (as they called themselves) becoming serious about building careers in cinema on their own eccentric terms. That transition came with Mondo Trasho, Waters’s first feature-length film, and his first to receive any approximation of professional distribution. Mondo Trasho premiered, as usual, with a nine-showing engagement at the Emmanuel Church rental hall, but it was quickly picked up by the New York-based Film-Makers Cooperative as part of their fledgling effort to break into the distro business. The coop never managed to secure a booking in their home city, ironically enough, but they did send Mondo Trasho to Los Angeles. There it received a surprising amount of attention, getting reviewed by Variety, Show, and the Los Angeles Free Press. Andy Warhol’s Interview ran the official press release even though it was impossible to see the film on that magazine’s home turf. And Pauline Kael, of all people, namedropped Mondo Trasho in her New Yorker review of Federico Fellini’s Satyricon, of all places. Mondo Trasho had longer legs than the shorts, too. It was resurrected to serve as a supporting feature for Waters’s next film, Multiple Maniacs, and although the totally unlicensed score taken from its creator’s own record collection threatens to keep it permanently out of circulation on DVD, it was available in VHS release as recently as 1998. So while seeing Roman Candles would seem to require personally sweet-talking Waters into showing it to you, Mondo Trasho requires merely that you be format-flexible and know where to look.”

” Earlier in this review, I called Mondo Trasho a transitional movie, and like most works of an artist in transition, it displays features of both the period that is ending and the one that is about to begin. With its grown-up-movie length, its starring role for Divine, and its halfway-serious attempts to impose a unified narrative framework on what must surely have occurred to Waters first as a succession of unconnected set-pieces, it is unmistakably paving the way for the films that would establish Waters’s reputation in the 1970’s. In Mondo Trasho, one can plainly see the sensibility of Dreamland Studios’ classical era taking shape. That said, though, I find Mondo Trasho more interesting for its holdover aspects, for the hints that it gives of the unseen John Waters.”

“……Divine’s part of the movie, in contrast, only appears to be incoherent, random craziness. Take a close look at what happens during Mondo Trasho’s central hour. Divine enters the story as an embodiment of lust (naked hitchhiker), greed (shoplifting), and gluttony (just look at her), and the first thing she does is to nearly kill somebody through her sin-directed carelessness. But as soon as she takes it upon herself to help Mary Vivian Pearce (turning her back on the hitchhiker who had her so heated up while she’s at it), she earns the favor of the Virgin Mary, who intervenes twice on her behalf while she seeks aid for the victim of her negligence. And by refusing to flee the firefight in Dr. Coathanger’s waiting room without Pearce, Divine finally makes the ultimate sacrifice in her efforts to put things right— at which point she ascends bodily into Heaven like a trailer-trash saint. Divine’s story, in other words, is a crass parody of the redemption-and-martyrdom narratives so beloved of the Roman Catholic Church in which Waters was raised and educated. Now a vein of reaction against his Catholic upbringing runs through practically the whole Waters canon, but I know of no other film in his repertoire (except possibly Roman Candles, on which the jury must be reckoned out, given its continued unavailability) that places such intense and continuous focus on Catholic themes. It came as quite a shock when I realized that, for Mondo Trasho looks on its face like the least focused John Waters feature.” 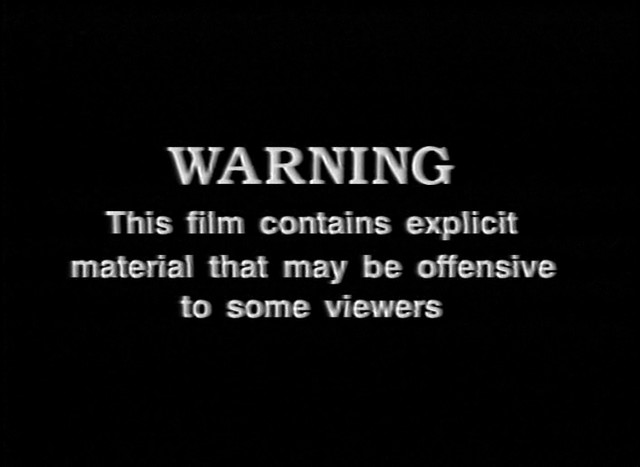 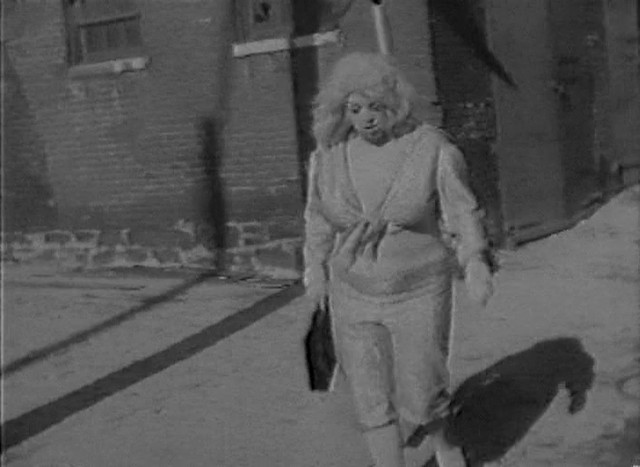 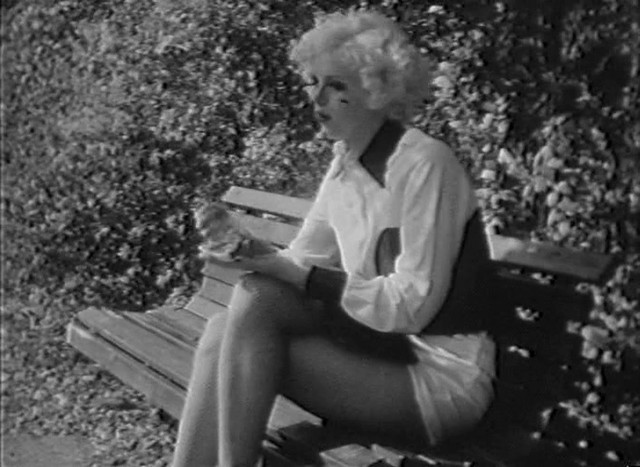 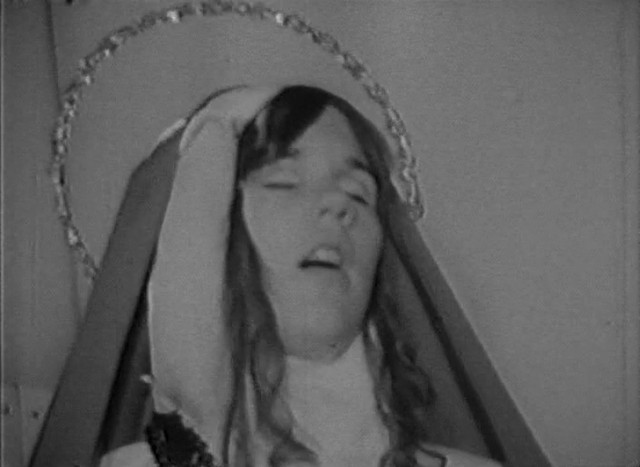 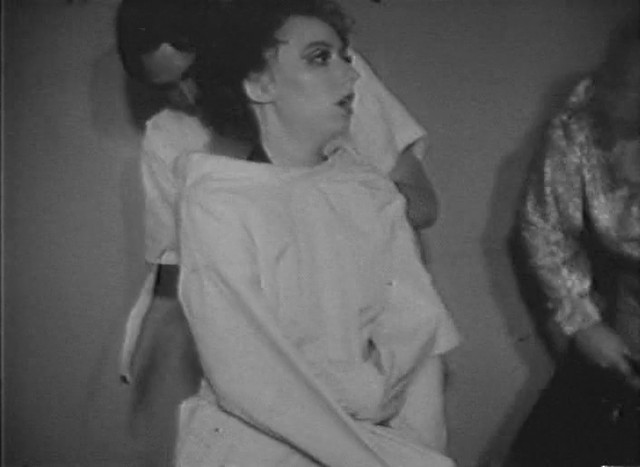 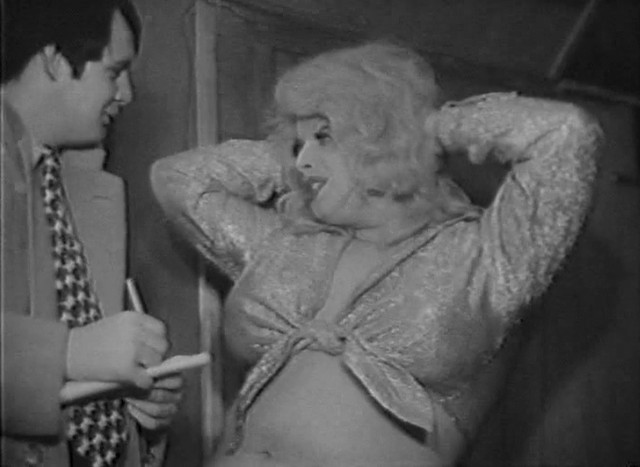 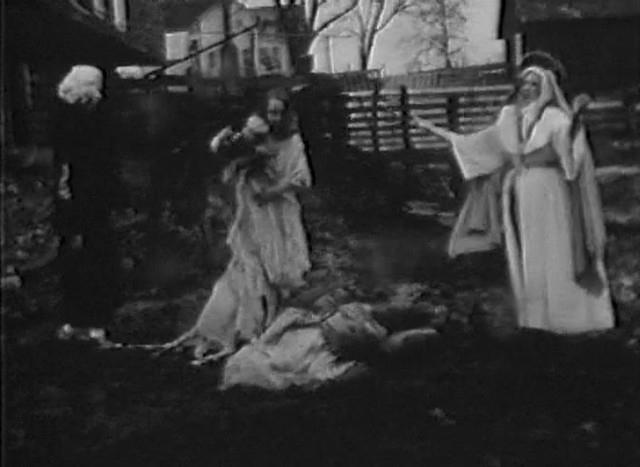