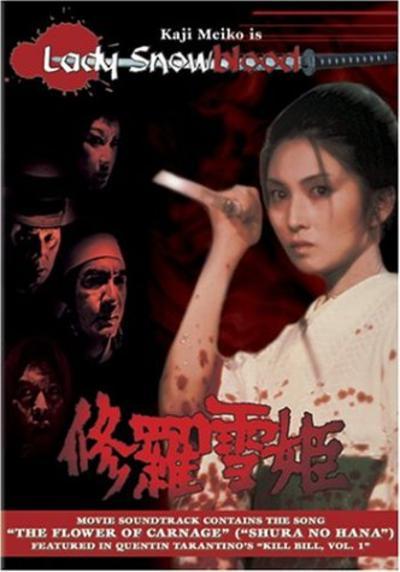 Quote:
Out of all the films director Quentin Tarantino pays homage to in his interpretation of the revenge flick, “Kill Bill”, the 1973 classic film “Lady Snowblood” takes credit for probably being the most influential to him. And rightly so; “Lady Snowblood” is one of the most original revenge films ever, particularly because of the protagonist who deals out the vengeance is not a man…but a woman. Based on a manga written by Kazuo Koike, who also created the “Lone Wolf and Cub” and “Crying Freeman” manga series, “Lady Snowblood” is one of the best revenge films I’ve seen.

“Lady Snowblood” is separated into four chapters that deal with a woman by the name of Shurayuki Hime (Kaji Meiko) and her total dedication to seeing the demise of the four villains who destroyed her family, rather cruelly I might add. She is raised as an orphan by a priest who gives her the title “the netherworld child”. He tells her from an early age that the entire purpose of her life is simply to avenge her family. He begins to train her at a young age so that she may be prepared to face her foes when the time arises. At her coming of age, she sets forth on her journey to seek out the bandits and to see that justice is paid in full.

One of main reasons “Lady Snowblood” work so well is Kaji Meiko’s portrayal of the films heroine, Shurayuki (Yuki for short). She was able to bring an intense performance to the screen and her haunting stare says more than any words ever could. She is the focal point of the story and her performance carries the entire film. While her story of vengeance is something some viewers might not agree with (myself included), the story was so riveting throughout the entire film, I actually wanted to see her win the battle against her enemies. The duels between her and her foes are vicious, quick, and gory; this is an extremely bloody film, albeit a little over the top. It’s the type of film where blood flows freely and frequently and I imagine this is to stay true to its manga roots.

The cinematography is wonderful as well as the music. The films soundtrack is comprised of a collage of groovy 70’s music that somehow seem to fit perfectly. The theme song is actually sung by Kaji Meiko and it was actually used in Tarantino’s “Kill Bill” as well. This and many other aspects were paid homage to in “Kill Bill”, and its surprising to see how much was uplifted from this film and put into that film; I personally have to say that “Kill Bill” is probably the closest American adaptation of “Lady Snowblood” out there, they are that similar. Never the less, “Lady Snowblood” is the original epic that started it all and has influenced many films even today. “Lady Snowblood” is a masterpiece of revenge cinema and I highly recommend it. And if you call yourself a fan of the samurai genre, and haven’t seen this film yet, shame on you!