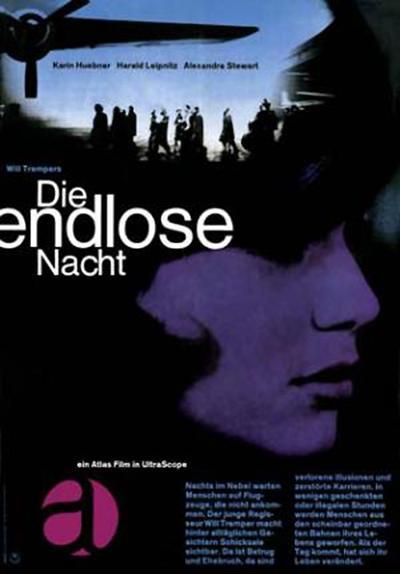 Sandra Brennan (allmovie.com) wrote:
This interesting film is set in Berlin’s Tempelhof airport during a bad storm. The airport is closed because of the weather, and many travelers are stranded there. Their unscripted, unrehearsed stories are the basis for the film. Most of the tales center around various forms of sex.

dirk pitt jr., IMDB wrote:
After almost 35 years one has to look at DIE ENDLOSE NACHT as a truly brave production. Financed on a shoestring budget, with upcoming actors (Hannelore Elsner), this one sticks out from all the other “lame” pictures of that year. Director and producer Tremper wrote and directed a wounderful one-night-at-the-airport film. The famous Tempelhof airport is setting for six individuals who are stuck in the building, because of deep fog. No aircraft can take off. “Not even the Russians would dare to fly out” – quote. Shot in beautiful ultravision – cinemascope, with a sexy Jazz score by composer Peter Thomas, you can breathe the mood of 1960s Berlin. Anyone who is interested in those times should not miss this b/w movie.