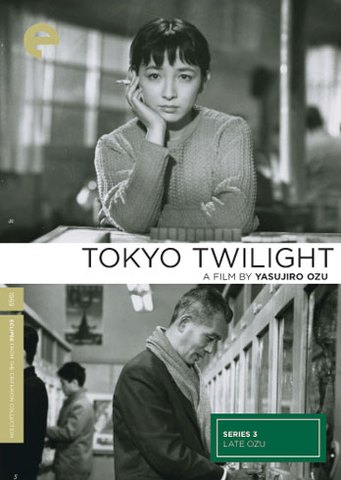 Two sisters live with their father. The younger sister is embroiled in an affair and becomes pregnant. The elder sister has run away from her husband and returned with her child to her parent’s home. Both sisters are astonished when their mother, long thought dead, turns up alive. The sisters are even more stunned when they learn what their mother’s life has been.

Yasujiro Ozu (“Late Autumn”/”Tokyo Story”/”Good Morning”) made 53 films in his long and successful career before passing on in 1963 at the age of 60. This is, perhaps, his most pessimistic drama. It’s cowritten by Ozu and his longtime collaborator and companion Kôgo Noda, and covers such unlikely Ozu scenarios as an unwanted pregnancy, abortion, an unfaithful wife, uncaring men and suicide. It plays like a Greek tragedy. This was the only film of Ozu’s not to appear in the top ten of Japan’s prestigious Kinema junpo film poll since The Only Son (1936) failed to make the grade. At the time it was considered a failure, but today it’s considered as one of his most evocative and powerful dramatic films. It’s Ozu’s only postwar film to take place in the dead of winter.

It picks up at twilight; a melancholy middle-aged bank auditor named Shukichi Sugiyama (Chishu Ryu) is having a casual conversation with a lower-middle-class diner in a noodle shop about the beauty of some remote Japanese islands. Sugiyama learns from the woman proprietor that his son-in-law, Professor Numata (Kinzo Shin), was recently in there and was drunk. At home he finds his sweet married eldest daughter Takako Numata (Setsuko Hara) has left her unreliable alcoholic husband, who also beats the baby Michiko when drunk, and brought her daughter with her. Sugiyama feels guilt-ridden because he insisted she marry the professor instead of the man she loved more. To add to the family woes, the flighty younger sister Akiko (Ineko Arima) is going around to Ginza bars and mahjong parlors chasing down her worthless boyfriend Kenji (Masami Taura). She borrows money from one of her father’s friends to have an abortion. In the meantime, their mother, Kikuko Soma (Isuzu Yamada), who abandoned her three children (a brother died five years ago in a mountain climbing accident) when Akiko was three for her husband’s subordinate and is presumed dead by the family, relocates after all these years in Tokyo. She has a new man, her former lover died during the war in a prison camp, and they own a mahjong parlor in the downtown area that Akiko sometimes frequents. Eventually both sisters learn the mother they hate has returned to Tokyo, and each has a devastating visit with the sorrowful mother. After Akiko’s visit, she runs into Kenji in a noodle shop. He’s a heartless cowardly character, whom she slaps because he’s so uncaring and runs out into the street to commit suicide by throwing herself in front of a train. Kikuko pays her respects to Akiko and leaves Tokyo for good, to live in the cold hinterlands of Hokkaido. She waits in vain for Takako to see her off at the railroad station and forgive her, and as the train takes off without her daughter she begins to cry. Takako cries at home, and decides that it’s best for her child to return to her husband and see if she can make their marriage work. In the last scene, the film centers around the father who has learned the most from his daughter’s death and now, at last, makes an attempt to communicate with Takako and offer her support and love. It comes a little late to avert tragedy, but it’s reassuring that he now understands he failed to communicate in a fatherly way to his daughters. It ends with the ineffectual father praying before Akiko’s altar, and the last shot is of the solitary father walking out in the bright sunshine of morning to report for work and start over with a fresh start.

It’s a film directed to the younger generation; it tells how they differ greatly from their parents but they still can’t escape from how their parents poisoned their life. This was Ozu’s last black-and-white film. As usual in an Ozu film it’s slow-moving, the acting is first-class, the dialogue is heady, the presentation is highly stylized and the plot is clear and realistic. It’s filmmaking at its best.
— Ozus’ World Movie Reviews [Dennis Schwartz] 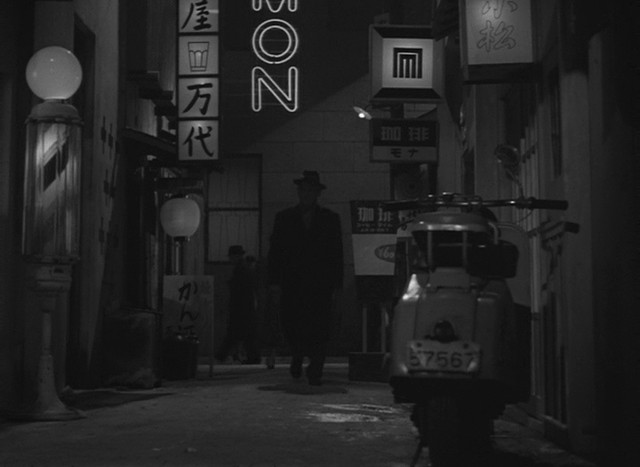 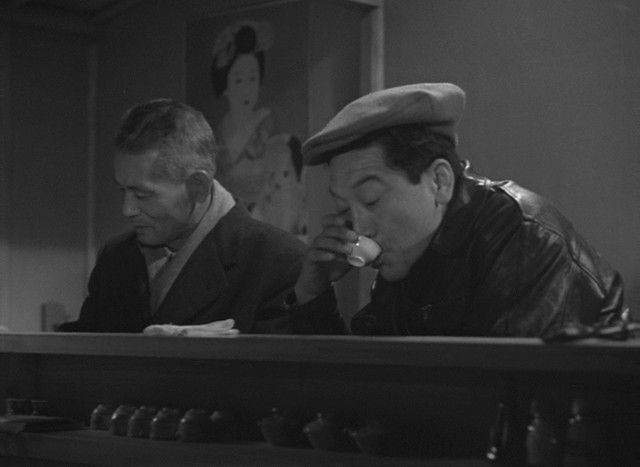 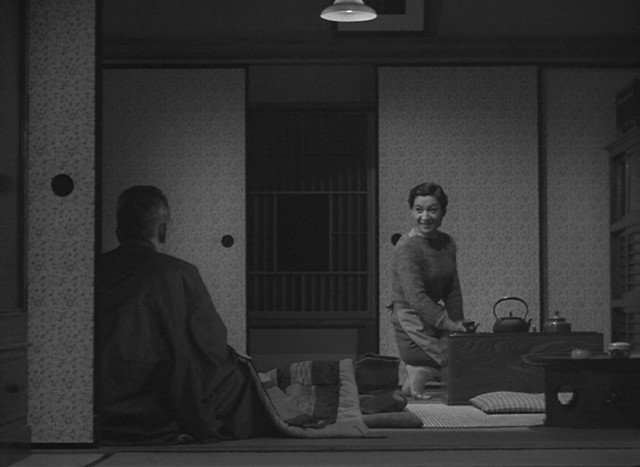 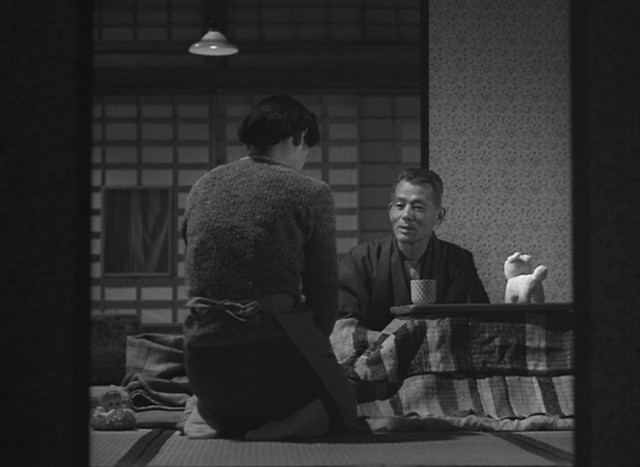 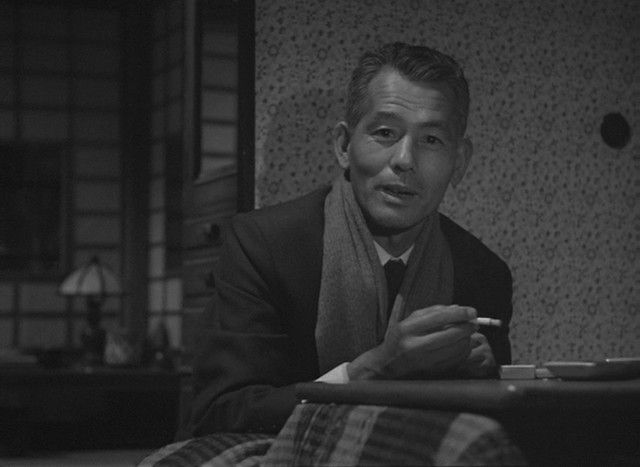 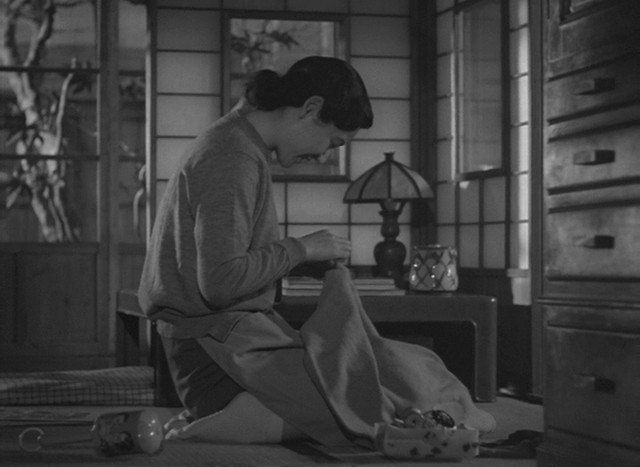 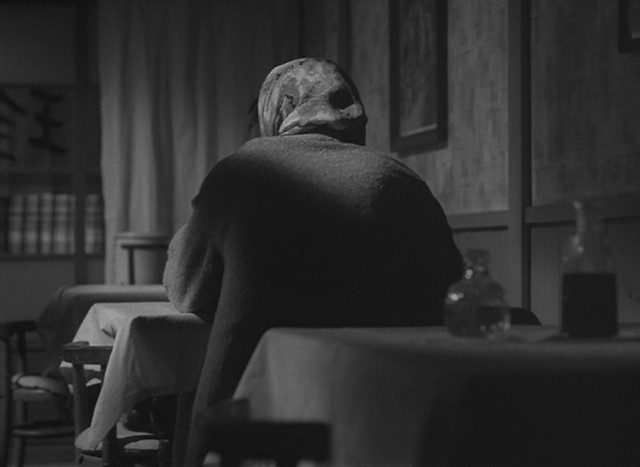