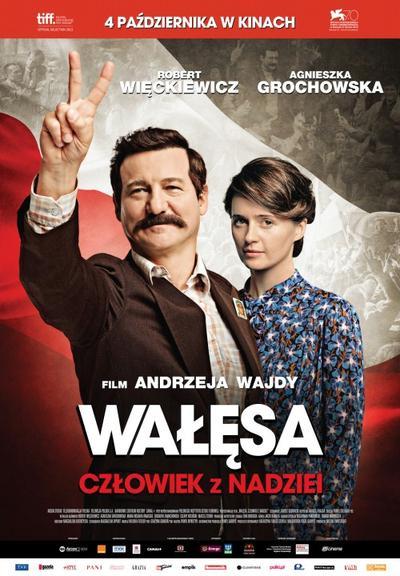 The depiction of the life of Nobel Peace Prize winner and founder of Poland’s Solidarity movement, Lech Walesa, as events in the 1970s lead to a peaceful revolution.

Quote:
Wałęsa, an electrician at the Gdańsk Shipyards, participated in local demonstrations during the 1970s. Following the bloody aftermath, which remains with Wałęsa, he concentrates on his day-to-day duties. Ten years later, a new uprising occurs and he becomes an unexpected and charismatic leader of Polish dockworkers.

Wałęsa’s leadership role signified the beginning of a new movement that successfully overcame the communist regime of the period, and Wałęsa is pushed into representing the majority of Poland’s population. The Soviet Union, previously regarded as too powerful to confront, eventually grants the movement a degree of acceptance. The Polish example of solidarity then caused a domino effect throughout Eastern Europe: people in Eastern Germany followed the Polish example, starting demonstrations for freedom that achieved the German reunification peacefully. The Soviet Union then dissolved alongside Yugoslavia.

While Europe is reshaped, Poland remains stable and peaceful. Yet a huge variety of political parties unfolds and Poland is on the brink of becoming as ungovernable as the late Weimar Republic. Wałęsa is subsequently elected as the first president of the new Polish democracy; but, this is followed by feelings of resentment among the Polish people who start to think that Wałęsa is becoming privileged. Consequently, the Polish people start to seek out ways to diminish Wałęsa’s significance, until they finally accomplish their goal through uncovering actions from a past period.