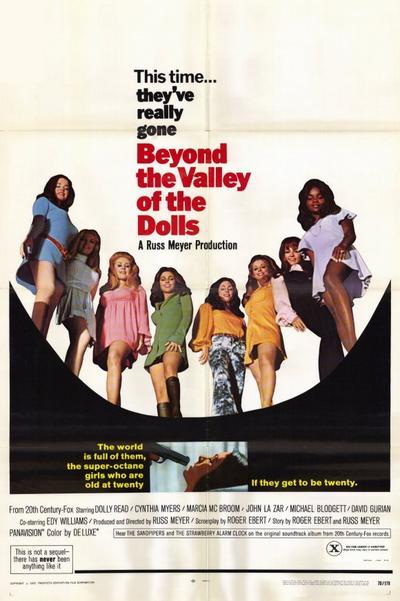 This film is a sequel in name only to Valley of the Dolls (1967). An all-girl rock band goes to Hollywood to make it big. There they find success, but luckily for us, they sink into a cesspool of decadence. This film has a sleeping woman performing on a gun which is in her mouth. It has women posing as men. It has lesbian sex scenes. It is also written by Roger Ebert, who had become friends with Russ Meyer after writing favorable reviews of several of his films.

Quote:
It’s deadpan-droll throughout (with at least as many highly quotable lines as Rocky Horror), cod-moralistic, carefully balanced between satire and melodrama, gratuitously focused on women with outsize breasts, and shot and edited with astonishing mastery. Much of Meyer’s film language, as Ebert points out, is redolent of ‘pure’ silent cinema: to-the-point storytelling and earnestly expressive performances, plus montage sequences worthy of Slavko Vorkapich.

Quote:
“This is my happening, and it freaks me out,” is what Beyond the Valley of the Dolls’ freakiest cat playfully expostulates. Independent producer and public titillateur Russ Meyer’s first film to be bankrolled by a major motion picture studio was only one of two completely cracked, vandalizing-cinematic-vaults movies that 20th Century Fox financed in 1970 in an effort to recover from white elephantitis of the Hello, Dolly! kind. And both critically-drubbed misunderstood-masterpieces actually featured significant creative input from, wouldn’t you know, film critics. It’s hardly shocking that the films’ respective worth can practically be boiled down to the worth of said critics. Myra Breckinridge is a bloated gas, a cheerfully dumb movie that thinks it’s smart. The critic involved? Rex Reed, a man who, whether writing reviews that come off as society columns or shrieking “Where are my tits?” at the top of his lungs, always gives off the impression that he’s the only one in the room who didn’t really get the joke. Or that he might be the butt.

Roger Ebert, who wrote the screenplay to BVD well before winning a Pulitzer, may have collected some of his most “scathing” movie reviews in a collection titled I Hated, Hated, Hated This Movie, but I can hardly think of a less irascible critic. No critic grades so promiscuously toward the top of his rating scale (like Victoria Jackson on SNL pointing out that one star was still “pretty good”). Why, he even melted the iced buttercube in Vincent Gallo’s polluted mouth. Whereas pairing Michael Sarne and Rex Reed was like watching one kid tell another that a king beats a pair of queens, putting Ebert with Meyer turned the good-natured male gaze into a three-dimensional prospect. Maybe the overall geniality can be blamed on the fact that its target, Fox’s own original Valley of the Dolls, is perhaps one of the squarest, droopiest camp classics ever. (Even running on Aldrich autopilot, Agnes Moorhead could tap dance circles around Neely O’Hara’s bloodshot eyes.) One of the original Dolls’ characters famously sings, “Love is a flower that lives for an hour, then withers and dies.” Where do you go from there but up?

Meyer’s three buxom beauties head westward for their inevitable corruption. But corruption, in Meyer’s world, mostly boils down to not being able to perform in bed to the standards of your chesty partner (especially if you happen to be a family executor trying to cheat a distant niece out of her rightful inheritance). Or pretending to be a boy so that no one will find out that you’re really a (gasp!) flat-chested woman. Meyer and Ebert’s crucial spin on Jacqueline Susann’s archetype is that women are the undisputed champions of the universe: they run shit, and if there’s any deflowering to be done on their person, at least they remain in charge of their own debasement. In one quietly show-stopping sequence, Edy Williams’s pneumatic porn star Ashley St. Ives stands on a beach, straddling her dewy, inadequate sexual conquest, and Meyer’s P.O.V. shot of her curvy figure towering against the night sky brings visions of the 50 Foot Woman. Both Dolls movies are sexually reactionary movies in the way they hand over the reigns to the opposite sex (Susann to fags like Ted Casablanca, Meyer and Ebert to the collective areola). But at least in Beyond everyone’s having a good time. As his overactive jump cuts prove, Meyer directs films as though he’s perpetually on the cusp of a fantastic orgasm.

At least until the strangely touched-in-the-head climax, that is, when Beyond really earns its stripes as a full-on freak-out. Referencing the Manson Family murders would be bad enough in the context of the rest of the film. Harm to oneself isn’t harm at all, as the hilarity of the mid-film suicide attempt (accompanied by Wild E. Coyote sound effects) proves. Harm to others is another scene entirely. But referencing Manson’s atrocities when the film you’re satirizing actually starred one of his victims? That freaks me out. At the same time, the ending also serves as a Kent State-esque coda to the ‘60s and the beginning of a nightmare in the same way that the Village People’s Can’t Stop The Music celebrated the “promise” of a brave, new, gay 1980s by dancing to “the music of the future.” Retrospect is a beautiful lens through which to view camp, maybe the only lens. Well, in the case of Russ Meyer films, retrospect and an expensive pair of peeping binoculars.