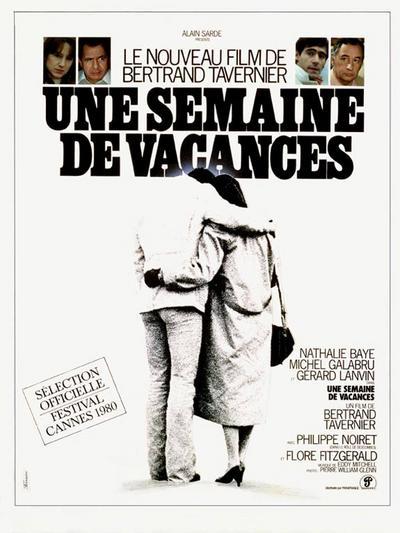 Quote:
Here are some ways that Bettrand Tavernier, in production notes for his new film ”A Week’s Vacation,” describes his film: ”A portrait of a woman against the background of almost murmured questions that concern us all, approached without didacticism.” ”A laughing fit before you realize it’s going to snow.” ”An old man who knows a lot.” ”A motorcycle engine more familiar than a Moliere play.” ”A letter you read at the end of summer.”

As this may indicate, ”A Week’s Vacation,” which opens today at the Paris theater, is something quite diffuse. It begins when a Lyons schoolteacher, Laurence Cuers, suddenly finds herself dissatisfied with her life, and decides that she needs a rest. She takes a week off from school and devotes the time to brooding, seeing old friends, making new ones, visiting relatives and wandering around town. She re-examines her work, her family and her romance with the demanding, wise-cracking man with whom she lives. At the end of the week, nothing startling has happened, but she does feel better and understand herself anew.

Although Philippe Noiret makes a brief appearance here as Michel Descombes, the character he played in Mr. Tavernier’s ”The Clockmaker,” this new film doesn’t much resemble the one with which Mr. Tavernier made his impressive 1972 debut. Mr. Tavernier’s recent films have grown ever more pleasantly anecdotal, and ever more mild. They reveal everything and nothing about their characters. In ”A Week’s Vacation,” the portrait of Laurence is a detailed one, but it isn’t full. We watch Laurence endlessly, but there’s no real unity to either the character or to the director’s observations about her.

As in Mr. Tavernier’s previous ”Spoiled Children,” about a number of different things that happen in an apartment building, this film feels compiled from a number of unrelated experiences. Only three writers are credited with the screenplay – Mr. Tavernier, Colo Tavernier and Marie-Fran,coise Hans – but it could just as well have been the work of many contributors. While no one episode stands out in dramatic terms, many of them have the richness of somebody’s favorite reminiscence on a given subject, and they have been stitched together with more attention to comprehensiveness than to coherence.

There’s a scene between Laurence and her friend Anne (Flore Fitzgerald), for instance, that is warm and funny without fitting particularly well into the film. Anne has a new lover and wants Laurence to sit at the next table in a cafe, incognito, and observe the man. When he arrives, he immediately begins wooing Anne with the most obscene of love-calls, and Laurence gigglingly overhears it all. This is fine, except that another key scene between Laurence and Anne has Anne discovering her friend quietly vomiting in the middle of the night, racked with some anxiety that she cannot explain.

A third key moment between them has the two women discussing their professional futures. Outside of this, they don’t appear together much in the film, so that the audience must piece together their friendship from individually intriguing, but largely unrelated, episodes.

Slight as it may be, the movie has its charms. The smaller roles are skillfully cast with vibrant, interesting actors comfortably suited to the vignette format. Philippe Leotard has only one scene, as Laurence’s doctor, but he plays it memorably. Michel Galabru is particularly ingratiating as Mancheron, the restaurateur father of one of Laurence’s pupils, a friendly, understanding older man with whom she shares many helpful conversations during her weeklong sabbatical. Mr. Noiret’s Descombes is worked into the film when he turns up as a dinner guest of Mancheron’s one evening.

And Gerard Lanvin, as Pierre, makes Laurence a lively, witty suitor – perhaps a livelier one than she deserves. As played by Miss Baye, Laurence is a pensive, uncommunicative woman with a sad-eyed smile. Though she is at her best when reacting to bolder, more outspoken players, Miss Baye spends much of the film in solitary scenes, just brooding. The film works most successfully when its director makes a virtue of Miss Baye’s quiet responsiveness by gently orchestrating the world around her.

For instance, it is raining hard when she initially leaps out of Pierre’s car one morning, deciding that she simply cannot go to work that day. After visiting her doctor, she steps outside to discover that the rain has stopped, that the sun is beginning to shine, and that the world feels better, as she does. At this, there is the first glimmer of contentment in Miss Baye’s otherwise impenetrable smile.