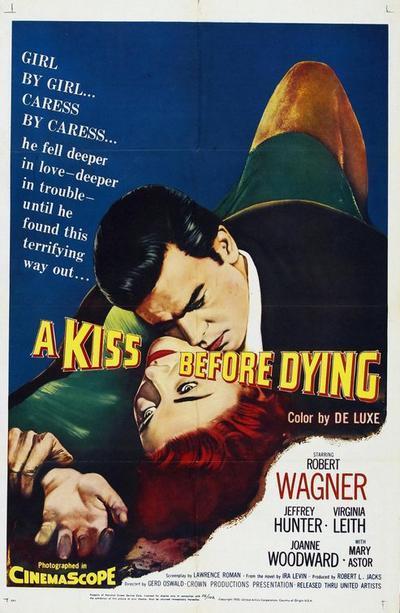 Quote:
In Gerd Oswald’s A Kiss Before Dying (1956) Bud Corliss (Robert Wagner) is a psychopath with one singular desire: He wants to become rich by marrying the daughter of a man who owns a copper mine. Bud’s actions reveal how when a man loves money more than people, people become objects to be used and manipulated.

The Hare Psychopathy Checklist lists 20 common traits of psychopaths. Bud possesses nearly all of these traits including “superficial charm”, “pathological lying”, “cunning and manipulativeness”, “lack of remorse or guilt”, “criminal versatility”, and a “parasitic lifestyle.”1 Although psychopaths commit actions that are unthinkable to normal people, they are not insane: “a mental illness of such a severe nature that a person cannot distinguish fantasy from reality, or is subject to uncontrollable impulsive behavior.” A 2012 study of 269 psychopaths concluded that “psychopaths are not mentally ill and should be held entirely responsible for their violent and manipulative actions.” Psychopaths are not restrained by a typical person’s sense of right and wrong. Lacking the conviction of guilt for what they do, they harm innocent people without remorse.

Psychopaths often wear a mask to make them appear normal. When Dorothy Kingship (Joanne Woodward) is in tears due to her unexpected pregnancy, Bud is soft-spoken and tender with her, soothing her with his calm manner, gentle touch, and reassurance of his love. Dorothy is in love with Bud because of the power of his romantic charm. Dorothy’s sister, Ellen (Virginia Leith), also falls in love with him, telling him that he holds a “diabolic spell” over her. Bud’s mask of romantic charm blinds the Kingship sisters to who and what he is.

When Bud is alone, he removes his mask, revealing to the viewer his cunning and manipulative nature. After a failed attempt to murder Dorothy with poison pills, he takes her to the top of a high building and pushes her to her death. Killing Dorothy is deliberate and intentional—a carefully thought-out plan. His body becomes tense for a brief moment, but he sheds no tears and shows no sign of guilt. Similarly, when he kills Dwight Powell (Robert Quarry), it is not because of a violent, uncontrollable impulse. The murder is planned, premeditated, and carried out in a calm emotional state.

Bud has complete control over his actions. In one scene, he listens to a University professor who is critical of the philosophy of determinism: “the belief that all events are caused by things that happened before them and that people have no real ability to make choices or control what happens.” Bud’s choices are the direct result of his desire for wealth and fortune. This desire can be traced to his childhood when he saw that his father was a failure.

Bud’s desire to become rich severed his conscience, making it easy for him to kill without the restraining conviction of guilt. In the end, he is destroyed by his love of money. In his failed attempt to murder Ellen, he is struck by a mining truck and falls into the open pit of the mine. His death serves as a warning to the viewer: We must be careful what we set our heart’s desire on. Whatever we love the most will determine who and what we are.