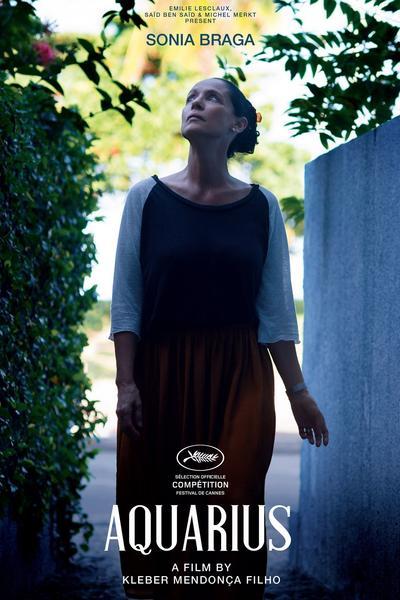 Synopsis wrote:
Clara, a 65 year old widow and retired music critic, was born into a wealthy and traditional family in Recife, Brazil. She is the last resident of the Aquarius, an original two-story building, built in the 1940s, in the upper-class, seaside Boa Viagem Avenue, Recife. All the neighboring apartments have already been acquired by a company which has other plans for that plot. Clara has pledged to only leave her place upon her death, and will engage in a cold war of sorts with the company. This tension both disturbs Clara and gives her that edge on her daily routine. It also gets her thinking about her loved ones, her past and her future.

The premise of this second feature from Kleber Mendonça Filho, the Brazilian writer-director of Neighboring Sounds, sounds like a recipe for sentimentality and hollow triumphalism. When Clara, a 65-year-old widow and retired music critic, refuses to sell the beloved beach apartment she’s lived in for most of her life, she finds herself under attack not only from a powerful property company but from former friends; even members of her own family question her judgment. Happily, Mendonça Filho avoids the pitfalls of feelgood cinema, creating a drama that’s credible, complex and very satisfying.

Key to his successful sidestepping of cliché is the casting of Sonia Braga, whose evident strength, intelligence and vitality are essential to the character of the embattled but stubborn Clara. Despite having been stricken by breast cancer back in the 1980s (the setting for a brief prologue that reveals her attachment to the same apartment) and lost her husband, she has raised a family, made a name for herself as a writer and retained her enthusiasm for music in particular and life in general. Braga’s charismatic performance ensures that we never pity Clara but merely hope that she’ll manage to survive the increasingly aggressive tactics of the company determined to buy her out—or, perhaps, prove to her just how unsafe it can be for a person of her age to live alone in a run-down building almost anybody can walk into.

As the story unfolds, it also expands; besides being a study of a woman under duress, the film is a portrait of a society where many traditional values, like its buildings, are at risk of being annihilated simply for the sake of modernity and money. The virtue of Aquarius—the title, incidentally, alludes to the name of the block Clara lives on—is that it never feels the need to sermonize. Its ethical, political and psychological insights are carefully contained within a consistently compelling narrative that feels fluid, relevant and true.