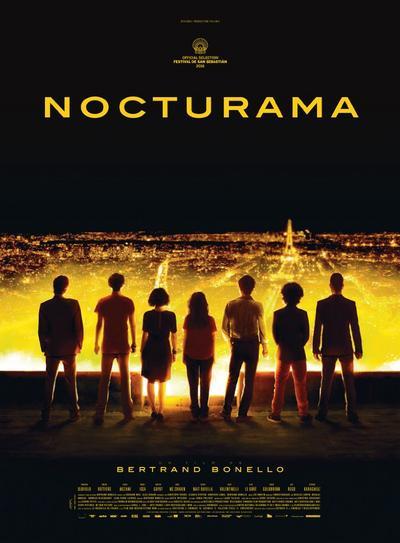 A group of young, multiracial radicals execute a series of terrorist attacks across Paris and then take shelter for the night in a shopping center while a massive manhunt is conducted outside.

Quote:
Bertrand Bonello’s last film, a Yves Saint Laurent biopic, followed the famed 20th century designer from enfant terrible into the 2000s and his doddering old age. Saint Laurent’s fashion may have changed the world, but that world is now being changed by forces far more radical than any of his designs. The enfants terrible of Paris in Bonello’s latest movie, Nocturama, aren’t provocative artists but rather a gang of 20-something Parisian terrorists. Shockingly, despite the ties to radical Islam of the attacks in France over the last year and a half, the terrorism of Nocturama’s youths seem to be enacted without explanation, as if in a cultural vacuum. When originally conceived, this cinematic possibility of Bonello’s clearly had the aim of presenting an abstract action. But since the real world has yet again surpassed the cinema by realizing the horrors originally considered on the silver screen, this enthralling film feels all the more strange by being at once utterly devoted to and disconnected from the moment.