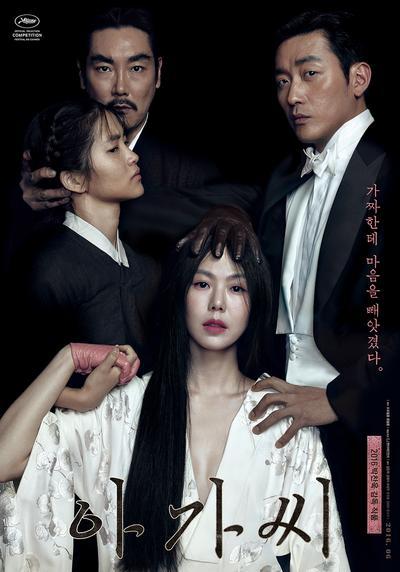 The screenplay by Park and Chung Seo-kyung is a kind of meta-reading of Sarah Waters’ 2002 novel Fingersmith, which tells the story of a girl from the slums in Victorian England who becomes an expert pickpocket, until drawn into a double-cross by a gentleman-swindler. Park’s playful reworking relocates the sting to 1930s Asia, where a Korean girl with bad intentions infiltrates the household of a wealthy young Japanese heiress. But nothing in the story goes as planned.

The first scene sets the tone. Standing forlornly in the pouring rain, beautiful young Sookee (newcomer Kim Tae-ri) hands the baby at her breast to a group of poor women with babies of their own, as she prepares to be escorted to “the Jap’s house.” It’s the time of the Japanese occupation of Korea and the natural inference is she is about to become the unwilling concubine of Kouzuki (Cho Jin-woong), a black-tongued old man of unparalleled wealth. But minutes later, as she arrives at his towering mansion deep in the woods, her role switches to Jane Eyre. She is merely assuming service as the new maidservant to the aristocratic orphan of the house, Lady Hideko (Kim Min-hee, Right Now, Wrong Then). But even this is a fiction: Sookee, a.k.a. Tamako, a.k.a. Okju, is really a bad-ass, street-smart petty thief sent by a suave master crook known as the Count (Ha Jung-woo, Assassination) to help him seduce and marry the young heiress. These dizzying, and quite amusing, revelations follow each other rapid-fire in the opening scenes, and they are just the tip of the iceberg.

The game is to second-guess where the next plot twist will be coming from. If at first the lovely Hideko appears to be a sheltered noblewoman unschooled in the ways of the world, there is more to her than meets the eye. Groomed from childhood to become the wife of her perv of an uncle, who makes no bones about needing her cash to buy more books, she tells Sookee about how, when she was little, her aunt (Moon So-ri) went mad and hanged herself from a cherry tree, becoming a ghost. Hideko also is under her uncle’s sinister threat of being taken to “the basement” if she ever tries to run away, a locale that remains out of sight until the final scenes.

With Sookee embedded in the household and growing close — very close, after a sexy tooth-rubbing scene — to his prey Hideko, the Count stages a dapper, self-assured entrance. He presents himself to uncle Kouzuki, a collector of rare erotic books, as a painter from a noble family fallen into ruin, and is hired to forge illustrations for new books Kouzuki intends to sell as originals. One evening, he invites half a dozen gentlemen in black tie to a reading of some choice tales from his collection. The reader is Hideko, dressed up in full geisha attire, and the way she interprets the stories — using more than just words — leaves the men panting and tightly crossing their legs.

Just as the eerie housekeeper Mrs. Sasaki (Kim Hae-sook) describes Hideko’s manse as a unique style meeting of East and West, so goes the exquisite tech work. Production design combines heavy, dark Victorian interiors with the lightness of Japanese sets, the cinematography culminates in a misty sequence on a magical fantasy lake, and Cho Young-wuk’s silken score, alternating with Mozart and Rameau, sets a light tone.

Strangely enough, while the original title Agassi can be translated simply as “young lady,” the English title The Handmaiden refers to one character and the French Mademoiselle to another. It all depends on how you look at it.