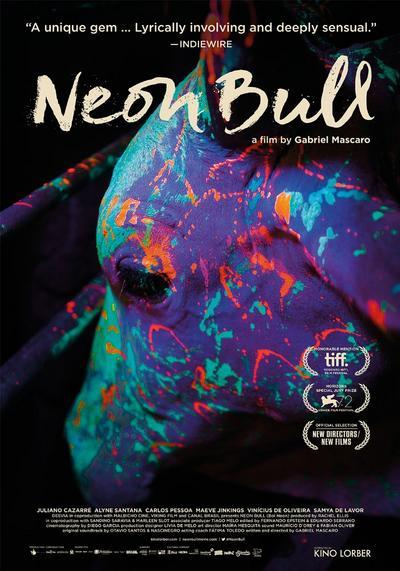 Quote:
We tend to view sex as a private, forbidden theater that’s detached from the remainder of life, rather than the origin of our life that courses through other acts. Films reflect this sentiment, of course. In most cinema, sex scenes scan as movies onto themselves, cordoned off from the rest of the narratives, though Neon Bull offers a confident refutation to this literal-minded squeamishness. Everything in this film is sensual, understood to be a subsumed sex act, with actual sex serving as a contextualizing catharsis.

Gabriel Mascaro’s film is set against the rodeos in Brazil, called the vaquejadas, which involve cowboys who bring bulls down by grabbing their tails. In a conventional narrative, the cowboys might be the heroes, but Mascaro concerns himself with the supporting infrastructure of the rodeo, with the people who provide the services that are taken for granted, both by the rodeo’s stars and the audience. We see Iremar (Juliano Cazarré), the closest character Neon Bull has to a protagonist, sanding down the bulls’ tails, ensuring that they have the right look and graspable texture for the show. Iremar strokes these tails like he might a lover’s appendage (roughly, but with prideful care), but what’s memorable about the scene is the way Mascaro’s matter-of-factness, as a dramatist, aligns with Iremar’s as a handler, as both regard the quasi-erotic tenderness and pride in performing a job as givens.

Mascaro is fully in sync with Iremar’s worldview; the filmmaker never dampens the mystery and spell of this atmosphere with overemphasis. What Neon Bull reveals is a micro-society in which its inhabitants live nearly on top of one another, quashing privacy, but nurturing an intuitive, biochemical intimacy among themselves, and between the cows, horses, and other farm animals. The subjugation of the animals by the humans is never politicized, and neither is the humans’ obvious subjugation by other people who live far higher on the social food chain. This apolitical texture isn’t incidental, but pointed and integral to the film’s sexual milieu, which is centered on the nuances that exist between the cracks of “mainstream” society.

Evocative tableaus feature Iremar and the rodeo’s crew sleeping within inches of one another in hammocks that have been erected in the trailers carrying the livestock. We’re able to discern how each plane of each frame interacts with the others, revealing differing functional layers of this society. These people touch each other and their surroundings with a freedom that’s verboten in corporatized 21st-century culture, leading us to wonder what we might be trading away for impersonal comforts. Iremar wishes to be a fashion designer, and he often recruits Galega (Maeve Jinkings) as a model for his designs, as she appears to be the only adult woman who works full-time with the rodeo. The way that Iremar touches Galega, pulling her shorts down low on her hips so he can get the right measurements, both intensely intimate and business-like (two opposing qualities that only serve to heighten sexual tension), parallels the way he pulls at the bulls’ tails.

We wonder if Iremar and Galega are involved with each other. Iremar clearly has a bond with Galega’s daughter, Cacá (Alyne Santana), who’s entering puberty and rebelling against her mother’s wandering lifestyle, including her sexual force of presence. Maybe the two adults had a thing in the past, but no longer. Events in this film, as in life, have a way of drifting by without announcement. One of Iremar’s friends, Zé (Carlos Pessoa), is unexpectedly promoted, and his replacement, Junior (Vinicius de Oliveira), upsets the rodeo’s ecosystem. Junior is as pronouncedly physical a being as Galega, and they inevitably have sex, after the latter is seen waxing her groin in the sort of disconcertingly casual eradication of boundary that’s typical of Neon Bull.

These wonderfully suggestive stanzas set the stage for one of the hottest and most poignant sex scenes in recent cinema. Iremar meets Geise (Samya De Lavor) when the latter approaches the rodeo to sell the men cologne, and their chemistry is overpowering. They meet again at the warehouse where Geise works, and the suddenness of their coupling, with her walking up behind him at a work table, has the intoxicating inexplicability, and inevitability, of sex as it sometimes seems to overtake us in life.

The scene is staged in an unbroken shot that’s roughly six minutes in length, and there’s no score to distance us from what’s happening, which straddles the ideal fine line between our cinema-fed fantasies of sex and the practical realities of performance. Instead, we hear the couple’s breathing as it escalates, as these people forge an atmosphere that builds atop the communal eroticism we’ve witnessed throughout the film. Iremar’s connection to his surroundings, to his Earth, merges with Geise’s openness with him, and with the suppleness of her advanced pregnancy—something that Mascaro, in his empathetic daring, never directly mentions. Neon Bull is a film that takes its characters entirely as they are, exposing their exteriors to bracingly enlarge our awareness of their interiors.