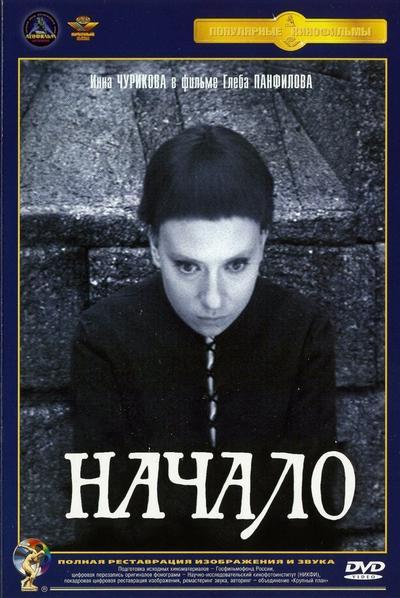 Synopsis:
A film-in-film story set in a provincial town in Russia. Pasha (Churikova) is an amateur actress who plays a witch at a local club, but her dream is to play Joan of Arc. In a strike of luck she is cast as Joan of Arc in a big screen film. Now she is torn between her luck and her love to Arkadi (Kuravlev) who is a married man.

Review:
“The Beginning is the story of Pasha, a working woman with passion for acting. She is an actress at the local amateur theatre, but thanks to her unusual appearance she often ends up playing the role of a witch. When a real film director visits looking for a lead for his upcoming filming about Joan of Arc, he is drawn to Pasha. So the young woman is caught in an adventure in the great film industry; something that her friends and family find hard to understand.”

“In his second feature film, Panfilov has wandered far off the road of socialist realism with his gentle way of portraying the everyday reality. He is following in the footsteps of Milos Forman and other Czech directors, introducing real life on the socialist screen. His mission is supported by Mihail Dolin with subtle black and white shooting; furthermore, Panfilov shows boldness by connecting the spiritual battle of Joan of Arc to the everyday Soviet reality.” (VpM)

No Ford Through Fire (В огне брода нет) had been the stunning debut feature of Gleb Panfilov and Inna Churikova. The Beginning has stood the test of time well, too. One may detect in it strong probable sources of influence, but they have been digested and merged into a personal whole.
The story within the story, Jeanne d’Arc, is stark, and the interpretation can be compared with the very best in the history of the cinema – Dreyer and Bresson, to start with. It is about the inquisition, the torture, the confessions, the show trial, the burning at the stake. Clearly the formidable energy of this story stems from the direct relevance to the Great Terror during Stalin. “But my soul is not in your power”. “I will announce later that the confession was elicited violently”.
But in the non-chronological episodes of the Jeanne d’Arc story she is also seen as the ruthless founder of the French military forces. Deserters are to be executed mercilessly.
The Inna Churikova film stardom story brings to mind the great Italians – Bellissima – and especially the Giulietta Masina characters in the 1950s films of Federico Fellini.
The “behind the scenes” dimension of the big film production has also documentary value about many aspects of film-making: planning, shooting, post-production, the grand premiere.
The Leonid Kuralyov character brings to mind Vasili Shukshin’s debut film There Lives a Lad. He is again a happy-go-lucky fellow, but now growing older and more tired.
The sense of humour in this film can be compared with Fellini and Shukshin.

The cinematography – black and white in scope – is rich and striking, with long takes, long pans, and long tracking shots. The approach is epic, giving us a revealing picture of society.

Two words for The Beginning: gravity and electricity.