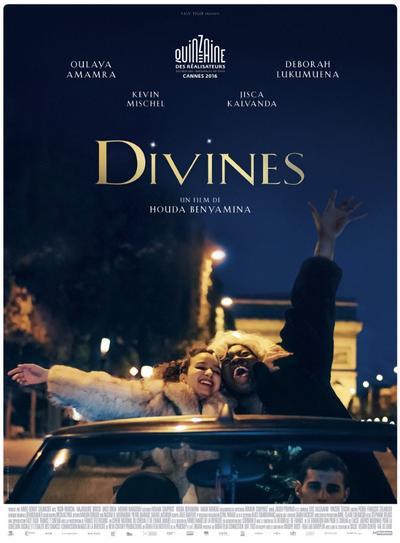 A street teenager from a dysfunctional family from a banlieue (HLMs) in Paris comes across a young dancer who turns her life upside down.

Isabel Stevens (Sight & Sound) wrote:
From the opening credits – a grainy breakneck tour of the lives of two teenage girls who lark about, posing and dancing via vertical-aspect cameraphone footage, I had a suspicion we were onto something special. Then comes the unusual opener: a hazy, abstract shot. Gradually, the interior of a mosque comes into focus. The smaller of the two girls, who only seconds ago stared us down and asked “You looking at me?” with full Taxi Driver-esque bravado, is outside trying to get her praying friend’s attention through a grate in the wall.

Meet Dounia. She’s a 15-year-old wannabe Wolfette of Wall Street – except her current bank is a supermarket where, with her best friend Maimouna, she dons a burka to steal food and other sundries which they sell, with verbal swagger, in the school playground. “My hands are made for gold,” she brags to her classmates while taunting her teacher for making her do a role-play for a dead-end life as a receptionist.

She has bigger dreams, eyeing up the local drug-selling outfit. As Dounia, Oulaya Amamra (who is in fact the director’s sister) bosses the film as the boisterous, fiery hustler at its heart. Through thick and thin (plotting as well as scrapes), we’re with her 100 per cent. Has Cannes has witnessed such a fierce, manic ball of female teenage energy, fighting to survive on the margins, since the Dardennes’ Rosetta back in 1999?

The camera hurtles through murky mall and estate back-passages – Dounia and Maimouna’s familiar rat-run escape routes – as it tries to keep up with them. Benyamina shows us life on the banlieue streets, in the mosque, the Roma slums where Dounia lives with her mum and aunt, and up in the catwalk of the theatre where she and Maimouna (Déborah Lukumuena) ogle and gob on supermarket security guard Djigui, who’s auditioning for a local dance troupe.

But what’s great about Divines is that (until a slightly hokey overwrought finale) this expertly sketched world is all in the background. The focus is on Dounia and Maimouna’s friendship. Even when a love story develops between Dounia and Djigui (played by dancer Kévin Mischel), the real chemistry is between the two buddies. (Benyamina says she modelled the large-mouthed but petite Dounia and her big softie partner Maimouna on those famous silent clowns Laurel and Hardy.)

Another ambitious gesture are the surprising contemporary dance scenes which in a drug-running buddy-thriller should feel out of place but doesn’t. Benyamina and DP Julien Poupard watch bodies writhing and twisting from the aerial perspective of Dounia and Maimouna. These semi-abstract sequences possess a real power – and suggest that not everyone from the banlieue ghetto is after money and power.

Benyamina calls herself a “self-taught director”. Divines was inspired by her experiences of the 2005 Paris riots. She initially trained as a hairdresser before going back to school to finish her baccalaureate and then going on to make short films. In 2006 she founded the organisation 1000 Visages (1000 Faces), a workshop were both her sister Oulaya and Deborah trained as actors. Its aim is to democratise cinema, much like her debut film.