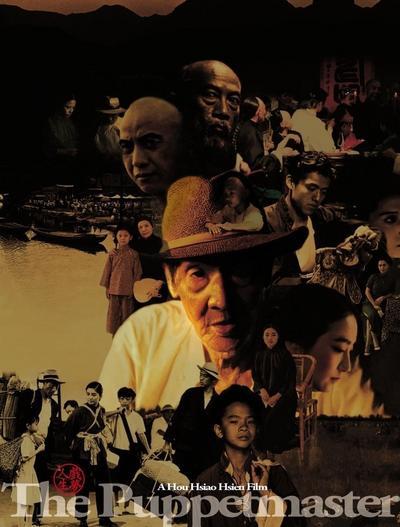 In the first half of this century, young Li Tienlu joines a travelling puppet theatre and subsequently makes a career as one of Taiwan’s leading puppeteers. During World War II the Japanese rulers of Taiwan use the traditional Chinese puppet theatre for their war propaganda. Only after the war street theatres start playing agaiN.

Quote:
Hou’s films, like a Chinese painting, are deliberately designed to incorporate the aesthetic of ‘liu-pai’ (opening the mind to what is not shown on screen). In this film, using dark interior shots with light coming only from the ceiling, Hou creates an abiding mood of nostalgia… The film is a haunting portrait of a people who have lost their way and are seeking to regain their cultural identity.

Quote:
For a director whose deliberate, demanding work sometimes receives criticism for being too boring, impenetrable, and difficult to follow, Taiwanese auteur Hou Hsiao-hsien remains a master at conveying movement, progression, and a sense of the inexorable rotations of the wheel of time. Though somewhat aesthetically similar to contemporaries Tsai Ming-liang and Wong Kar-wai (as well as Japan’s late, legendary Yasujirô Ozu, to whom Hou paid tribute with 2003’s Café Lumière), it is Hou, more than any other living filmmaker, who is capable of elegantly and eloquently evoking humanity’s unstoppable advancement into the future via every subtle camera movement, understated musical gesture, or melancholy fade to black. Hou is famous for not employing standard cinematic storytelling techniques like insert shots and cutaways, two omissions that—when coupled with his preference for long, unbroken master shots with little lateral and horizontal movement—create a visual stasis that, ironically, heightens one’s sensitivity to the burdensome heft and evolution of each passing second, minute, and year. Clichéd as it may sound, Hou’s films are designed to be experienced as well as watched, since they require a willingness to attune one’s faculties not just to the literal action at hand, but also to the rhythmic, measured melody of Hou’s mise-en-scène.

As Hou’s cinema concerns itself with the weight of time, so too does it narratively address the past’s never-ending influence on the present, a recurring thematic preoccupation that reached its apex in 1993’s The Puppetmaster. Having previously cast amateur actor Li Tien-lu in Dust in the Wind, Daughter of the Nile, and City of Sadness, Hou decided to mine the elderly gentleman’s life story for a film about Taiwanese life under Japanese occupation, a 50-year span from 1895 to the conclusion of World War II that corresponded with Li’s rise to prominence as an acclaimed and beloved puppeteer. Combining conventional dramatization (featuring Lim Giong as Li the young adult, Lin Chung as Li the adolescent) with narration from the actual Li and documentary-ish interviews in which Li recounts key moments from his life, the film is a stylistic amalgam that highlights the dichotomies between fiction and fact, memory and reality even as it seeks to synthesize them into a harmonious tapestry. By tackling history through the prism of one man’s tumultuous life, Hou forms a link between the personal and the political, and in the figure of Li—a person whose life eerily mirrors his country’s half-century struggle for identity—the filmmaker finds an ideal vehicle through which to tell Taiwan’s story of subjugation, resistance, and liberation.

“So that’s how I was born,” says Li during The Puppetmaster’s opening scene, having already recounted (over the sight of his grandfather doting on him as an infant) how his last name, shared by his maternal side of the family, was given to him through a careful series of arrangements between his father and grandfather. That Li ascribes his origins to a set of legal provisions immediately connects him to his occupied homeland—a disempowered territory now defined by the rules and regulations of a foreign party—just as his age-old profession ties him to the ancestral traditions of Taiwanese culture. Such associations run throughout Hou’s biographical tale, with Li’s rebellion against his abusive father and stepmother, his exile from puppeteering after the Japanese forbade public performances, his compulsory work for a Japanese propaganda puppet troupe (part of the government’s “Japanization movement”), and his ultimate triumphant rebirth as a celebrated artist all designed to reflect the upheaval of a country in which the indigenous population was forced to accept that, as one drunken Imperial Army soldier tells Li, “You can never escape the fact that you are a colonized islander. A third-class citizen.”

Yet despite these clear-cut parallels, Hou’s rigorously formal film is far from straightforward. Rather, it’s a beautifully assembled series of narrative ellipses, faux-reliable commentary and playful artifice that, besides seeking to link the modern with the bygone, also delicately strives to reinforce the notion that the past is unavoidably fictionalized through memory. The first presentation of a Li puppet show begins with a head-on shot of the ornate stage before cutting to a cross-section view that reveals the puppeteer pulling the strings behind the curtain, an illuminating image of how Li’s art is a man-made construction that, along with an opera performance in which the audience’s shuffling and seated foreground silhouettes emphasize the overriding staginess of the theatrical routine on display, articulates the embroidery involved in storytelling. By conceding that stories, both those rooted in fiction and fact, are synthetic constructs fashioned by people, Hou admits to his own film’s questionable veracity as well as shows how long-gone incidents and emotions are constantly revisited through the filter of one’s recollections, a semi-reliable sieve inevitably prone to embellishment and distortion.

Nowhere in The Puppetmaster is this idea more clearly illustrated than in Li’s infrequent voice-over and interview interludes, which find him describing key episodes (such as the specifics surrounding how his father-in-law contracted malaria in a coffin) that Hou has already dramatized, in slightly different form, minutes earlier. By having Li relate altered versions of things we’ve already witnessed, Hou strikingly points out how the act of remembering invariably sparks a metamorphosis of what’s come before. Yet just as importantly, such a device allows the filmmaker to express the passage of time by asking viewers to experience the film’s occurrences in both real-time and, through our own reliving of certain scenes more than once via Li’s delayed annotations, the past. This process of experiential repetition is the film’s most arresting and vital structural component, linking now with then, the real with the semi-real, in a web of era-intertwined symbiosis. And through forcing us to be continually and acutely aware of his story’s fractured chronological procession, Hou also creates a tangible impression of history’s ubiquitous impact on the present.

Shots of tiny individuals either set against the countryside’s towering mountains or enveloped by lush forests while navigating a bridge situated in the trees skillfully impart the enveloping enormity of the film’s locales. And by utilizing a tight 1.33:1 aspect ratio and interior doorways to visually enclose his screen (as is his trademark), Hou conveys the constriction of geography and the past on his characters, all of whom—by walking in and out of the near-motionless frame—come across as mere transitory figures in a static, eternal environment. Yet despite The Puppetmaster’s somewhat imposing evocation of man’s relationship to nature (and national history), the director nonetheless conjures up a dose of joyous, transcendent magic through Li’s regularly amusing anecdotes about his relatives and friends (which are filled with talk of superstition) and the recreations of Li’s enchantingly elaborate puppet shows. In these performances’ exquisite, stunning glory, Hou’s masterpiece becomes not only a depiction of one man’s decades-spanning bond with his familial birthplace, but also, just as affectingly, a tribute to art’s, and the artist’s, power to help us comprehend and confront the world around us. 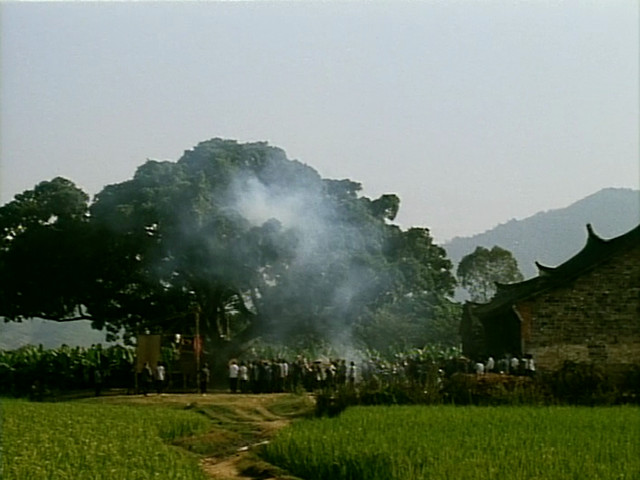 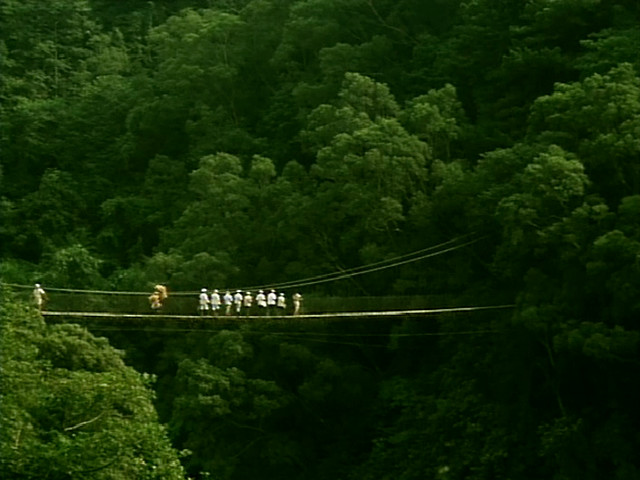 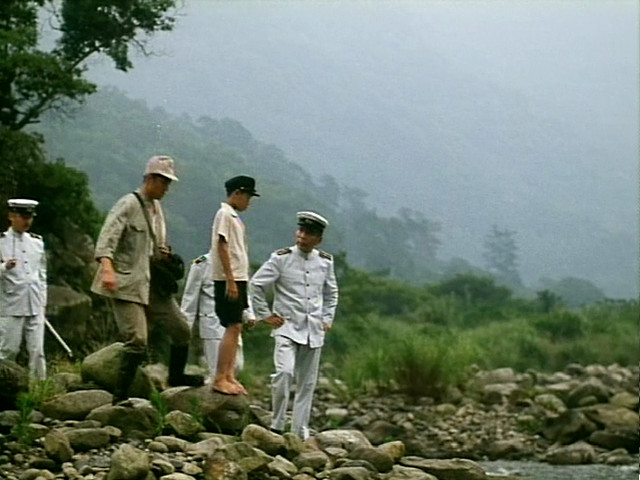