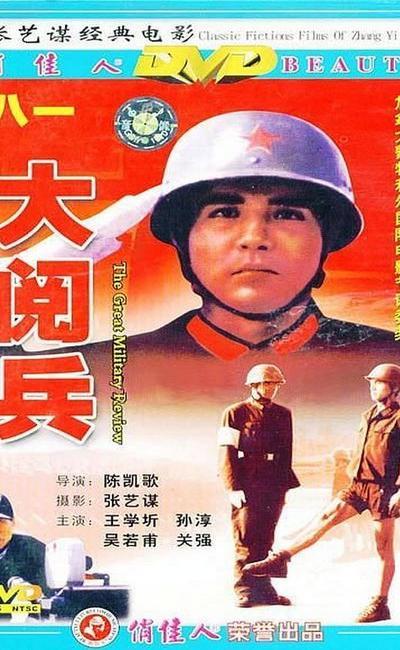 Review:
Walter Goodman, NYT wrote:
From the impressive overhead shots of troops assembling for a march-past in Beijing’s huge central square on the 35th anniversary of the People’s Republic of China, in October 1984, to the final slow-motion close-ups of them parading, the camera of Zhang Yimou commands ”The Big Parade.” The Chinese movie, directed by Chen Kaige and on view tonight at 6 o’clock and tomorrow at 8:30 P.M. as part of the New Directors/New Films festival, holds you by its photography even as you may be getting a bit restless at the Chinese version of the good old American boot-camp movie.

The youths are being trained to do their outfit proud on the big day. The drill is familiar. There’s the tough squadron leader (”I bathe with sawdust and sleep on wood”), who is deeply concerned about his men. There’s the self-promoting lad who learns something about working together with his comrades. There’s the conscientious fellow who can’t make it through training. There’s the stuttering recruit who skips his mother’s funeral to stay with the squad. There’s the byplay among the young soldiers as they have their heads shaved: ”Baldy! Baldy!”

The story is a combination of a boys’ magazine tale and a reruiting document. Officers anguish over which of the soldiers must be eliminated before the parade. They raise questions like, ”Must a recruit who makes an error be punished?” The squadron leader, who turns out to be a much softer type than we have seen lately in ”Full Metal Jacket” or ”An Officer and a Gentleman,” reflects, ”Do I really understand my soldiers?” You’d never catch Brian Donleavy worrying about something like that.

The pep talks and buddy-buddy exchanges and bouts of self-criticism are painfully earnest. ”They used to say good men don’t become soldiers,” declares an officer. ”That’s not true any more.” He exhorts his troops with a line from the national anthem: ”Build a new Great Wall with our flesh and blood.” A little heavy considering that all they are going to do is parade for a minute.

It’s the photography that lifts ”The Big Parade” out of the rudely fashioned trench of its story. Mr. Zhang keeps finding new angles from which to dramatize the disciplined cooperation that the movie preaches. He gives us fields of helmets and boots, ranks of expressionless profiles, orderly patterns of trucks and rifles, a military band at the ready, a snappy mass salute. The ordeal of the men when they are made to stand at attention for three hours in a summer sun is captured with excruciating immediacy; you can feel their pain through the shimmering heat. The downpour in which they must march is a bone-drencher. You may not be moved to join up, but you can’t help coming away with a more direct understanding of the message of collecive effort that the Chinese authorities are trying to drum into their countrymen.