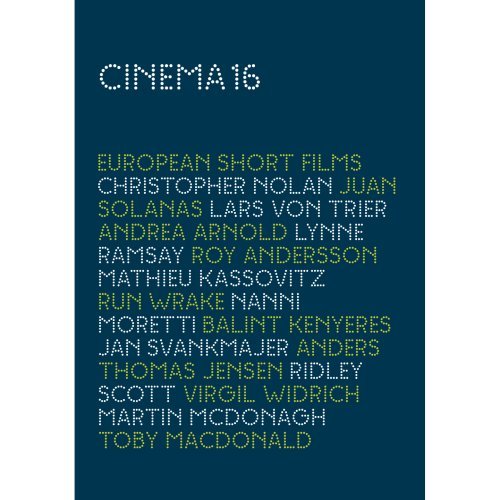 Quote:
Cinema16 celebrates the short film by showcasing some of the best classic and award-winning shorts on DVD.

Aside from providing short films with a much needed platform, Cinema16 gives filmmakers and movie-lovers access to some great films that would otherwise be near impossible to see, from the fascinating early works of some of the world’s greatest directors to award-winning films from its most exciting new filmmakers.

Launching for the first time in North America, Cinema 16’s European Short Films DVD celebrates some of the best short films to have come out of Europe in the last half-century.

With over three hours of films, this DVD is essential viewing for anyone with an interest in the moving image. The majority of the films are accompanied by original audio commentaries, almost always by the directors themselves.

This DVD follows the success of Cinema16’s collections of British and European Short Films which have been published in the UK Since 2003 and have featured films from Mike Leigh (Vera Drake, Secrets and Lies), Stephen Daldry (The Hours, Billy Elliot), Peter Greenaway (The Cook, The Thief, His Wife and Her Lover), Jean-Luc Godard (Bout De Souffle), Tom Tykwer (Run Lola Run, Perfume), Krzysztof Kieslowski (The Three Colours Trilogy) And Patrice Leconte (The Hairdresser’s Husband) and many others.

Fierrot le pou (1990) Mathieu Kassovitz
no commentary for this film

Six Shooter (2004) Martin McDonagh
no commentary for this film

Wasp (2003) Andrea Arnold
no commentary for this film

NOTICE:
2 of them are hardsub
some have vobsubs
English spoken shorts doesnt have subs

all shorts have 2nd audio Track with directors commentary except 2