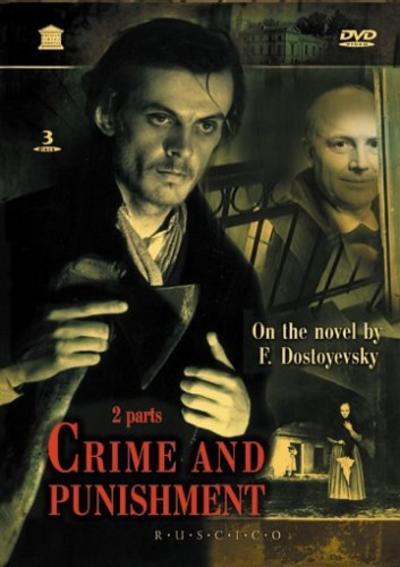 Comments from IMDb
Anyone with a love of Dostoyevsky’s classic novel cannot fail to be enraptured by this marvellous film. It captures the heart and soul of that complex tale more closely than any other version. Perhaps this is because it is Russian, for there are those who believe non-Russians require a leap of imagination to grasp the meaning of Crime and Punishment. And I believe that Dostoyevsky himself would have liked this film!

The picture is visually stunning and the casting is immaculate. Some of the performances are quite breathtaking; Georgi Taratorkin is totally convincing as the haunted, conflicted Raskolnikov, depths of emotions playing in his dark, expressive eyes; Maya Bulgakova tugs at the heartstrings as the wretched Katerina Ivanovna; Innokenti Smoktunovsky puts in a masterly performance as Porfiry, playing him with a regretful, fatherly air whilst Tatyana Bedova is simply sublime as a beautiful, fragile, holy Sonia.

It is a darkly claustrophobic film and flicking the pause button can seem like coming up for air – but that’s the point – that’s just how reading the novel feels! The film has been described as lumbering – but I longed for it to last even longer!

The print isn’t the best quality and the subtitles are sometimes difficult to read – but persevere if you can…it’s worth it…it’s a masterpiece.