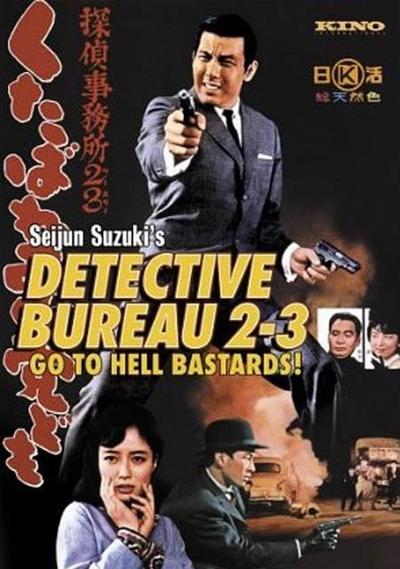 Japanese director Seijun Suzuki solidified his growing cult following with this offbeat adaptation of Haruhiko Ooyabu’s crime novel. Jo Shishido stars as Det. Tajima, a smug investigator who nabs a pair of criminal gangs with flamboyant aplomb while the police remain baffled. Suzuki treats the rather hoary plotline as an excuse for dark-humored camp, and young audiences were delighted with his irreverent approach, which made him one of the few distinctive names in the ’60s assembly-line of Nikkatsu Studios. ~ (Robert Firsching, All Movie Guide)

Suzuki’s calculated B-movie renditions of yakuza thrillers put him in the company of Samuel Fuller, the one Western director most often invoked upon mention of Suzuki’s name. But Suzuki, as a stylist of Japano-trash, could also be compared to Mario Bava, the great stylist of Eurotrash. Indeed, Suzuki may be compared with any of the great mavericks who subvert the studio system by personally reinventing or restructuring popular conventions of cinema, and mostly getting away with it (think of Welles, think of Corman, think of Melville). The works of such directors knock the idea of classical perfection in grand fashion, exuding exuberance almost as an end in itself. (…)
The Suzuki style is now touted as legendary, almost like something out of the blue. To a receptive audience (and in his time, Suzuki had a keen following among students), there’s more than a touch of spontaneous experimentation in his films – the deliberate nature of cutting the sequential flow of his narratives and an imperative style that demands symbolic use of colours or high-contrast monochrome, hyperbolical sets and lighting, and stylized acting. The formalized nature of Suzuki’s filmmaking means that he could not have come from nowhere. I would contend that Suzuki was a master of design and that he could not have accomplished what he did without some foreknowledge of what he wanted to do. After all, he claimed to have patterned his films after traditional Kabuki and its three points of departure: the love scene, the murder scene and the battle scene. “Translated into film, those are the three basic ingredients of entertainment,” says Suzuki himself.
And there is the rub of Suzuki criticism. Despite his credentials as a radical artist, Suzuki is essentially an entertainer. He invests his pictures with the qualities of pop-art illusion and, in true sleight-of-hand style, views himself as a “prophet” rather than as an artist. Perhaps that is why Suzuki is something of a paradox. The director’s first name, Seijun, is made up of the kanji (Chinese characters) meaning “clear” and “flowing”, and, despite the patent non-linearity, his narratives do resolve themselves clearly and flowingly (so much so in fact that if one were to approach Suzuki’s films with certain preconceptions about his inaccessibility, one would be left at the end of his pictures with the sense of wondering what the fuss was all about). On a micro level, Suzuki invites his audience to view his movies in apparently unstructured blocks or collages, but on a macro level, his pictures are fulfilments, epiphanies, and yes, prophecies of a kind.