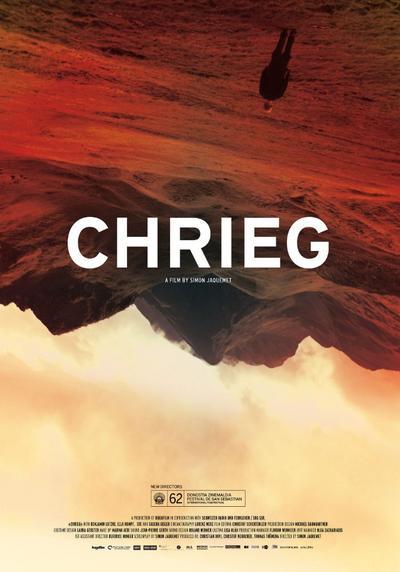 Home is where the hate is in At War, in which a teenager’s boot camp punishment becomes a kind of perverted camaraderie. Filmed in the spirit of gritty Euro-miserabilists like the Dardenne Brothers and infused with the same show-all/judge nothing ethos, the film has a drive and intensity that pushes it compellingly through its first half before descending into predictability as it doggedly brings its inner logic full circle. But there’s enough of interest happening in that first section to ensure that there’ll be more to come from director Simon Jaquemet when War has done its time on the festival frontline.

Matteo (Benjamin Lutzke) is a pretty typical post-millennial, green-haired 16 year-old, confused, uncommunicative and seeking an affection that comes distorted from his mother (Livia Reinhard), who somewhat confusingly for the young lad asks him to hold his baby sister to his breast,and which is entirely lacking from his simmeringly angry, father (John Leuppi), unhealthily obsessed with his muscle bulk and by extension with antediluvian ideas of masculinity.

One of the few peaceful scenes in At War comes in its undeniably powerful, authentically unsettling first forty minutes. Matteo removes baby bro from his pram and taking him into the woods, where he wonders “will you by my friend when I grow up?” as a deer looks symbolically on. Given Matteo’s obvious unhappiness, the scene is taut with an ambiguous tension that is later missing from the film. Whatever, such behaviour is unacceptable to his father, who prescribes Matteo a three-month visit to a mountainside farm, which will toughen him up.

Matteo has been delivered from one set of sociopaths into the hands of another. The farm is run as a boot camp — “no Internet, drugs, TV or alcohol” — by alcoholic Henspeter (Ernst C. Sigrist) and his rough and ready sidekick Anton (Ste): the other ‘guests’ are Dion (Sascha Gisler) and Ali (Ella Rumpf). They all set about humiliating their new charge, locking him into a cage and putting a chain around his neck, but after Matteo has braved a death-defying mid-air challenge, best viewed from behind fingers, and has proved that he has indeed toughened up, he becomes one of the gang.

he problem is that between Matteo’s duplication of his father’s wished-for masculinity and the finale, which brings things psychologically full circle, the film is merely an efficient but unspectacular teen gang drama, albeit one set surreally in the Swiss Alps. One lengthy sequence has them driving to town to do as much damage as they can, taking on the society that has made them the bad boys they are (and girl). Previously not a sociopath, Matteo has become one because of his father’s Neanderthal view of education — and once that’s been said, At War doesn’t have much else to offer.

The leading performances are from non-pros, and feel suitably raw: Lutzke, rarely off-screen, is under instructions to play it within his natural range and occasionally allow the inner turmoil to flash out. But viewers looking for character redemption will search in vain — Jaquemet is not interested in sweetening the pill. Matteo and his new gang may be normal, and perhaps they’re even representative, but they’re not nice, or even particularly interesting, with the script happy to show them at work collectively rather than making any distinctions between them which would have nuanced the film.

Lorenz Merz’s photography is largely hand-held, with insistence on the use of natural light at times plunging things into virtual darkness. But it also allows the chilly majesty of the Alpine locations to come through powerfully unfiltered, as the violence which the city has nurtured inside these confused teens flourishes in the clean mountain air.