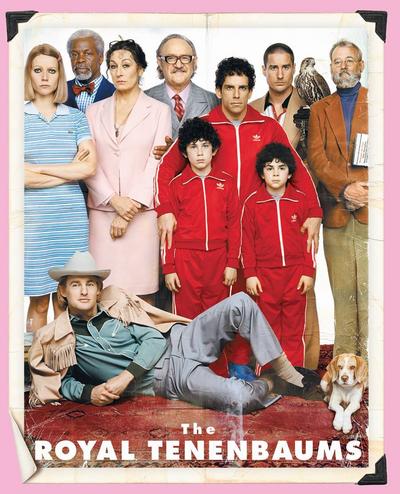 Quote:
Wes Anderson, like so many now-New Yorkers (myself included), grew up far away from the city, and so came to an idealized vision of the metropolis and its sophisticated, complicated residents through literature and movies. His new movie, The Royal Tenenbaums offers up clan of overeducated, old-money, East Coast eccentrics who occupy a house far too grand to have survived the ’80s and ’90s real estate booms without having been turned into multiple condominiums. These magnificent Tenenbaums, however, barely survive the ’00s.

Anderson constructs his film as equal parts homage to Orson Welles and literary time, with a prologue, chapters, and epilogue, title pages and omniscient narrator (a soothingly husky-voiced Alec Baldwin). The prologue introduces the family dynamic and individual characters’ histories: father Royal Tenenbaum (Gene Hackman) is a bit of a ne’er-do-well, and Etheline (Angelica Houston) is the accomplished matriarch. Their kids, like J. D. Salinger’s Franny, Zooey, and Seymour Glass, are wise, precocious overachievers. Chas develops a designer breed of Dalmatian mice before becoming a teenaged real estate and bond tycoon. Young Richie is an international tennis champion and aspiring artist, although, as the narrator informs us, he “failed to develop as a painter.” And Margot, the adopted daughter prematurely prone to excessive use of eyeliner, is a produced and grant-winning playwright by the time she’s 14. One day, Etheline asks Royal to leave the house and the family. Chas, Richie, and Margot wonder aloud if this turn of events is their fault; Royal explains that he has made “certain sacrifices” on account of having children, and that his departure is their mother’s decision.

The plot proper begins 22 years after all this. Etheline is a respected archeologist with a sweet suitor in her accountant, Henry Sherman (Danny Glover), but Royal and the children have all lost their way. Turned out of his hotel due to insurmountable debt, Royal weasels his way back into the family home by claiming that he has stomach cancer. A red Adidas running suit-clad Chas (grown up into Ben Stiller) has recently lost his wife in a plane crash, and now repeatedly drills his two curly-haired sons on safety, specifically in escaping their home in the event of a fire. When he determines that sprinklers must be installed in his apartment, he and the boys also return to the roost during renovations. At the same time, Margot (Gwyneth Paltrow) has not written a play in years and spends her days in the bathtub, watching TV and secretly smoking. Jealous that Chas has moved home, she leaves her husband, psychologist Raleigh St. Clair (Bill Murray), and moves back to her old room. She also reignites an affair with writer Eli Cash (Owen Wilson), who grew up across the street and “always wanted to be a Tenenbaum.” Richie (Luke Wilson), who a year before blew a major tennis final (in a deliriously funny sequence), has been cruising around the world on a ship. The one dutiful child, he comes home to visit his ailing father.

The Royal Tenenbaums is Anderson’s departure from home and a new beginning. It is his first film not made in his home state of Texas. It also represents his impressive development as an artist, while retaining the signatures that made his first two films so distinctive. In Bottle Rocket, Anderson brilliantly crafted comic lunacy with irrational characters who hatch harebrained schemes at a screwball pace, adding a quirky romance on the side. With Rushmore, he further developed his signature absurd characters, focusing on prep school student Max Fischer’s (Jason Schwartzman) extracurricular activities, but also captured adolescent heartbreak and offered a subtle critique of class differences (the bravely romantic Max being decidedly less wealthy than his classmates).

The Royal Tenenbaums certainly builds on Rushmore’s nuanced contradictions, as it is also a sad comedy. Any of its misguided children could be Max 20 years on. The scale of the film — as well as the fantastic world in which it takes place — has expanded from Anderson’s prior work. Whereas the characters in Bottle Rocket and Rushmore put on elaborate schemes that backfire with trivialized effects (no one really gets hurt — they are just made to look like fools), the consequences of the characters’ self-destructive mistakes in The Royal Tenenbaums — from romantic disasters to drug abuse to professional and personal suicide attempts — are much darker.

Anderson’s film has a cruel streak — the audience does not laugh affectionately with the Tenenbaums but at them. As idiosyncratic as each of the characters are, the ideal cast’s performances never become caricature. Hackman, notably, captures Royal’s desperate duplicity, and Paltrow, playing her first ensemble character (as opposed to leading lady) since Hard Eight, changes her posture to convey Margot’s withdrawal and anxiety.

With its emphasis on characters over events — though a lot does happens — The Royal Tenenbaums occasionally makes the audience, much like Eli, want to be part of the family, in spite of their neuroses and flaws. The house, with hot pink walls, winding staircases, and rooms decorated to match the characters who inhabit them (an office for Chas, painted murals for Richie) gives the mansion a homey but also enchanting feel. Outside of the house, this mythical New York has a similar preposterous splendor — extending to 375th St. and 22nd Avenue.

Anderson’s take on New York, to quote Woody Allen’s introductory voice-over from Manhattan, “Romanticize[s] it all out of proportion.” The comedic scenarios invoke critiques of child prodigy exploitation and burnout, manipulative family relations — as Royal does his damnedest to get back into the family — and the facade of affluence and normalcy put on by this downwardly mobile clan. But these issues never seem to pierce through the veneer of Anderson’s charmed city and society. The Royal Tenenbaums is populated by the kind of folks who seemed so witty and savvy in Edith Wharton’s and Salinger’s books, Woody Allen’s ’70s and ’80s films, even Whit Stillman’s Metropolitan. Indeed, it is The Royal Tenenbaums’s hyperbole — in its characterizations, ornate sets, idiosyncratic logics, and, ultimately, its classic everything-comes-together ending — that both makes the fantasy so lively and reveals the self-delusions at its foundation.
Lucas Hilderbrand @ PopMatters

Quote:
“The Royal Tenenbaums” was shown as part of this year’s New York Film Festival. Following are excerpts from A. O. Scott’s review, which appeared in The New York Times on Oct. 5; the full text is available at nytimes.com. The film opens today in Manhattan.

Wes Anderson’s “Rushmore” was the story of a brilliant, annoying schoolboy blundering into the world of adult emotions. Max J. Fisher, the hero of that film, was not only precocious, but also enchanted by the idea of his own precocity.

Mr. Anderson’s new film, “The Royal Tenenbaums,” is a movie Max might have directed. At once endearing and unbearably show-offy, it seems to be the product of a sensibility formed by age-inappropriate reading: a childhood spent sneaking into the grown-up fiction section of the library (and encountering, among other things, the complete works of John Irving) and a post- adolescence shaped by a lingering fondness for books like “Eloise” and “From the Mixed-Up Files of Mrs. Basil E. Frankweiler.”

Like those books “The Royal Tenenbaums” takes place in a fantasy New York of grand hotels and brick and limestone mansions where gypsy cabs meander through the streets, and the light plays off dark mahogany, red velvet and brown corduroy. Like J. D. Salinger’s Glass family, the Tenenbaums — Royal is the given name of their scapegrace absentee patriarch, played by Gene Hackman — are a brood of hothouse geniuses.

From Alec Baldwin’s jaunty voice- over narration and a rapid shuffle of early scenes, we learn that Chas, Margot and Richie, the three Tenenbaum children, were brought up to be prodigies and became a financial whiz, an award-winning playwright and a tennis champion. (As adults they are played by Ben Stiller, Gwyneth Paltrow and Luke Wilson.) Abandoned by Royal, they were raised by their mother, Etheline (Anjelica Huston), who in her middle years discovered the twin vocations of urban archaeology and contract bridge.

Though exquisitely eccentric, the Tenenbaums are hardly anomalous. The folks outside the family circle all share their melancholy oddness. Margot’s secret lover, and Richie’s childhood friend, is a novelist named Eli Cash, a kind of stoner Cormac McCarthy played with mellow aplomb by Owen Wilson (who is also Mr. Anderson’s writing partner and Luke Wilson’s brother). Etheline is courted by her accountant and bridge partner, the dapper Mr. Sherman (Danny Glover), while Margot is married to Raleigh St. Clair (Bill Murray), a neurologist who performs strange but harmless experiments on a boy who might be Max Fisher’s city cousin.

Mr. Anderson presents each of these characters — and several more — with the fastidious care of a collector arranging prize specimens on a shelf. He likes to shoot them alone in the middle of his wide, meticulously composed frames as if they were sitting for formal portraits. But his obsessive regard for their individuality, the care he takes to make sure we see their uniqueness, isolates them from one another. The Tenenbaum ensemble never achieves the adhesiveness and density — the buzzing, asymmetrical feeling of relatedness — that defines family life.

This gallery of portraits, this array of handmade figurines lovingly placed in shoe box dioramas, fails to coalesce into anything resembling drama. The actors, nearly all of whom do some splendid work, are left in a quandary. Though both Mr. Wilson and Ms. Paltrow underplay their mannerisms and express the bewilderment and disappointment that greets gifted children as they tumble unwillingly into maturity, it’s hard to believe that Margot and Richie are really siblings.

In spite of the quasi-incestuous passion that flickers between them (quasi because Margot is adopted), they seem especially inert in each other’s company. The actors are asked to convey real and complex human emotions, but the characters are paper dolls.

Chas, by contrast, is a wind-up toy, a riot of protective anxiety directed at his sons, Ari and Uzi, and Oedipal rage directed at Royal. But his behaviors — they don’t register as emotions — seem generated by nothing more than the script’s demand for temperamental contrast.

The siblings are a collection of mismatched archetypes: there’s the writer, the athlete and the Jewish guy. Mr. Stiller impersonates a diagnosis rather than possessing a psychology, and he seems still to be playing his character in David O. Russell’s “Flirting With Disaster,” stampeding through the Tenenbaum household in search of yet another set of plausible birth parents.

“The Royal Tenenbaums” is proud of its literary affectations: each meandering section is styled as a chapter of a book, complete with page mock-ups decorated with line drawings of the characters, most of whom are paper thin. The only one who bursts off the page into three dimensions is Royal. Everyone else has defining tics, but Mr. Hackman is an actor of such explosive inventiveness that no mannerisms can contain him.

What drama the movie has revolves around Royal’s attempt to reconcile with his family by feigning terminal illness. (His children, fleeing crises of their own, have all moved back home.) A disbarred lawyer, he comes on like a con man whose biggest con is admitting that he is one. Mr. Hackman has the amazing ability to register belligerence, tenderness, confusion and guile within the space of a few lines of dialogue. You never know where he’s going, but it always turns out to be exactly the right place. His quick precision and deep seriousness nearly rescue this movie from its own whimsy.

But whimsy — and Mr. Anderson’s inability to refrain from admiring his own handiwork — triumphs in the end. For every moment that hits a delicate note of pathos and surprise — as when Royal tries to win over Margot with ice cream, or when he confronts his rival, Mr. Sherman, in Etheline’s kitchen — there is another that suffocates in cuteness.