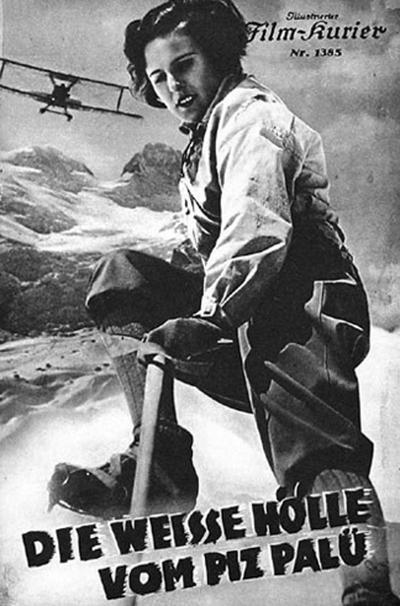 Plot Synopsis
While enjoying a romantic stay in a remote mountain cabin, Maria and Hans (Leni Riefenstahl and Ernst Petersen) discover a logbook revealing the tragic tale of Dr. Johannes Krafft (Gustav Diessl). He lost his wife in an avalanche, and wanders the faces of Pitz Palu seeking to reclaim her frozen corpse. On the anniversary of her death, Krafft appears at the cabin, and Maria and Hans volunteer to join him on the next leg of his grim expedition. A series of unfortunate events leaves the three stranded on the dreaded north face without shelter or supplies. While Johannes’s loyal friend (Otto Spring) leads a spectacular torch-lit rescue effort through the icy glacial caves, Johannes, Maria and Hans face the realization that they cannot all survive, and someone is fated to perish in The White Hell of Pitz Palu.

Following the minor role that Leni Riefenstahl played in Rolf Raffé’s Das Schicksal derer von Habsburg, she returned to working with director Arnold Fanck in this mountain adventure film which was first released as a silent in 1929, then later re-edited and released as a sound version in 1935. This Arnold Fanck – G.W. Pabst co-production was a major hit both in Europe and abroad (including North America), and also marked the first feature film appearance by the famous WWI flying ace and stunt pilot, Ernst Udet, who played himself in the film.

The film was shot from January to June 1929 in the Bernina Range in the Alps. Work was divided between the two directors. Arnold Fanck was responsible for the location shots in the mountains, Georg Wilhelm Pabst was responsible for the indoor shots and was advising Fanck in matters of dramaturgy. The set design was by Ernö Metzner, the cinematography by Fanck’s long-time collaborators Sepp Allgeier, Richard Angst and Hans Schneeberger. Fanck should continue to work with actors Leni Riefenstahl and Ernst Udet in the films Stürme über dem Montblanc and S.O.S. Eisberg.

In 1930 a sound film version in English was released internationally. In 1935 a German sound film version with a film score by Giuseppe Becce was produced. The film was shortened to 90 minutes. With the Nazis in power since 1933, the Jewish-sounding name “Karl Stern” was changed into “Hans Brandt”. All scenes with the Jewish actor Kurt Gerron, who was murdered in Auschwitz concentration camp in 1944, were cut from this release. A remake was produced in 1950 under the title Föhn by Rolf Hansen, starring Hans Albers and Liselotte Pulver.

The original version of Die weiße Hölle vom Piz Palü was lost until 1996. The film was restored in 1997 by the German Federal Film Archive. The original film score by Willy Schmidt-Gentner is still lost. – thanks to Wikipedia for the info 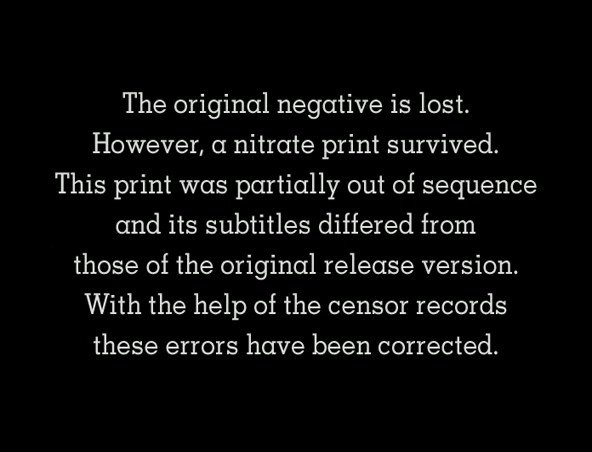 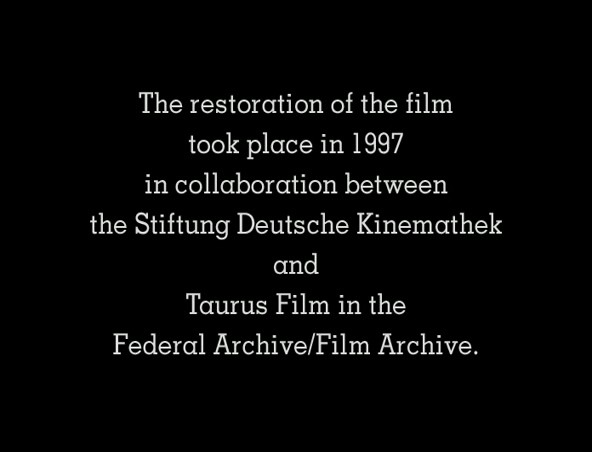 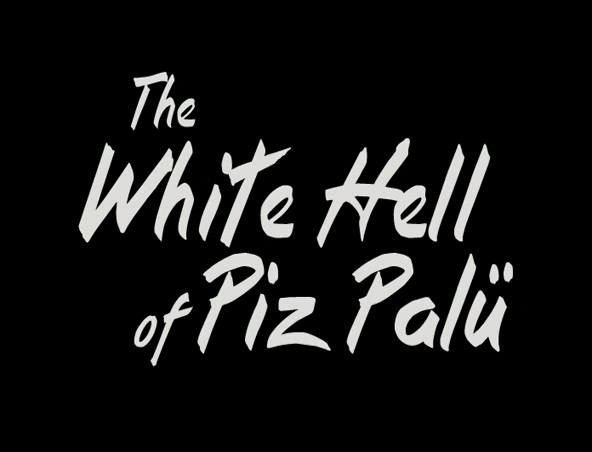 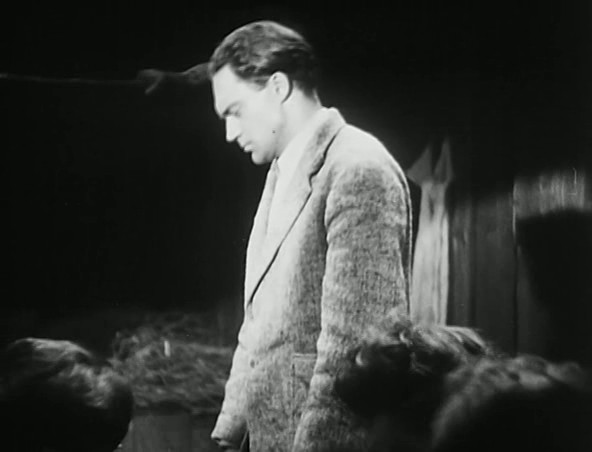 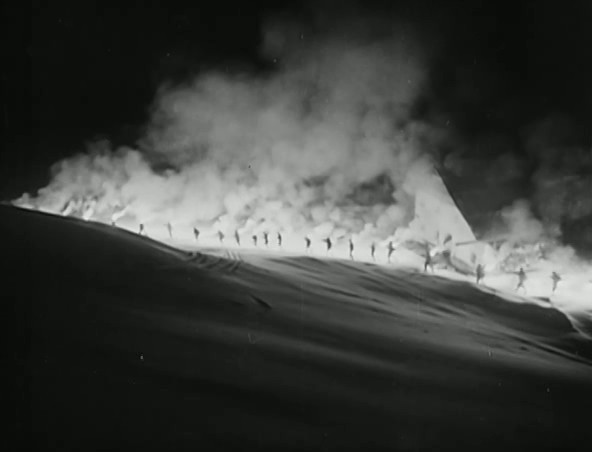 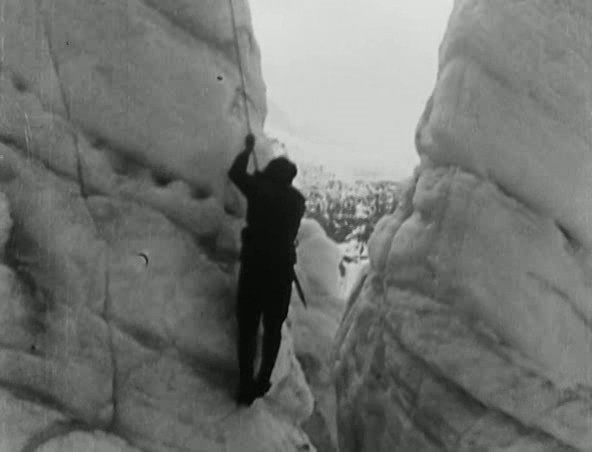 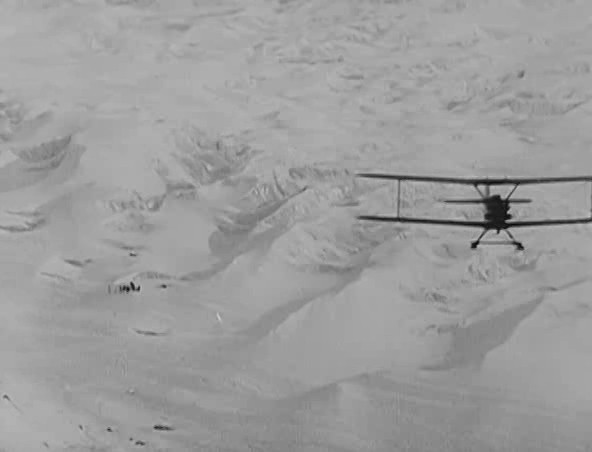 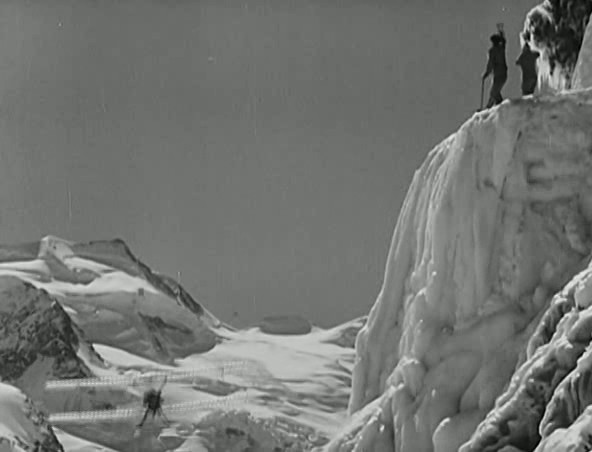 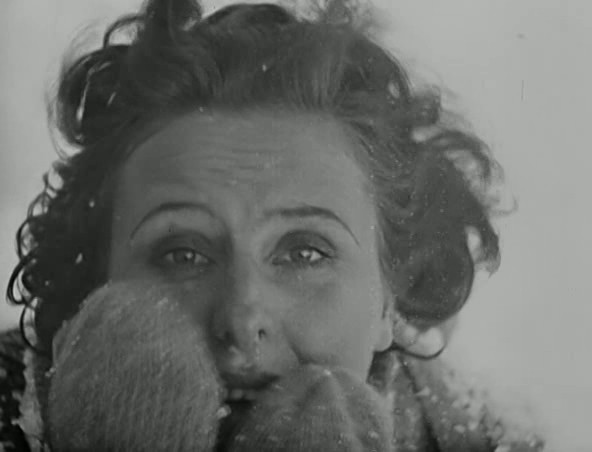 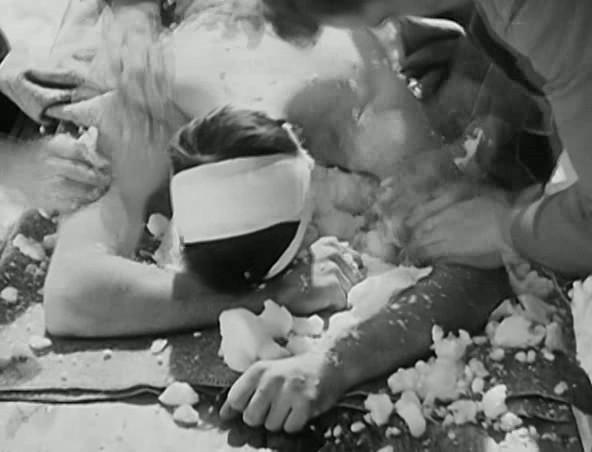 Quote:
From Slant Magazine Review by Fernando F. Croce
While the Mabuse spy thrillers would later be molded (and shrunk) into Bondian escapades, the mountain film—Weimar Germany’s other staple genre—would scarcely survive the end of the regime and the arrival of sound. The White Hell of Pitz Palu sums up the romantic motifs of the genre invented by geologist-filmmaker Arnold Fanck, though the film’s superiority to most of the movement’s other entries might be due to the presence of G.W. Pabst, who shares directing duties with Fanck. Still, as the credits pronounce, it is a film “by” Fanck, whose fascination with vast, alpine beauty is evident from the opening shots. Cocky Dr. Johannes (Gustav Diessl) climbs the eponymous glacial peak and laughs at Nature, only for Nature to laugh back—an avalanche claims his wife and Johannes is reduced to a pensive shadow of his former self, grimly roaming the mountains for her body. Years later, he bumps into Maria (Leni Riefenstahl) and Hans (Ernst Petersen), a newly engaged couple who promptly join him in his journey toward Pitz Palu. The setup suggests a rehash of Von Stroheim’s merciless triangulation in Blind Husbands, but survival takes precedence over romance once the trio gets pinned down in the icy face without supplies. It’s easy to see here the mysticism of purity that will fuel Riefenstahl’s later work as a director, particular her collaborations with the Nazi Party, yet the film is more earthbound, less dreamlike than Riefenstahl’s own mountain epic, The Blue Light—where her camera seeks out perfection of line, Fanck and Pabst prefer rugged verticals and sudden shadow patterns. Nature here can shift from ethereal to ominous in a heartbeat, so it’s no surprise that the film vacillates from a sense of wonder toward the voluptuous expanses to a need to conquer them. Striking pictorial moments abound (a torch-bearing expedition into the glaciers is staged as a chilly infernal descent), yet, like much of its ilk, The White Hell of Pitz Palu suffers from monotony and laboriousness. Fritz Lang achieved truer awe in Woman in the Moon that same year, though Pabst, who had already aided Greta Garbo and Louise Brooks into screen sublimity, understood that snow-covered behemoths have nothing on the human face—accordingly, and movingly, the most spectacular shot remains a close-up of a tear forming in Riefenstahl’s terrified visage.

Image/Sound
Considering the original negative was lost and the restoration came from a nitrate print, the transfer is especially impressive. A somewhat higher number of flickers and blemishes than in other silents released by Kino, but overall the image does justice to the photogenic landscapes. Though it often swells a little too excessively, the orchestral score is perfectly suited to the genre’s romanticism.