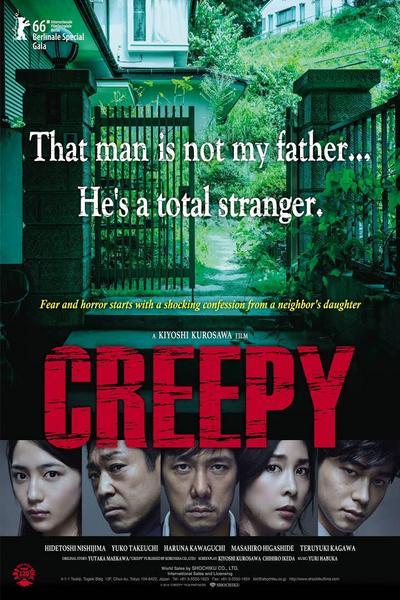 Takakura is a former detective. He receives a request from his ex-colleague, Nogami, to examine a missing family case that occurred 6 years earlier. Takakura follows Saki’s memory. She is the only surviving family member from the case. Meanwhile, Takakura and his wife Yasuko recently moved into a new home. Their neighbor, Nishino, has a sick wife and a young teen daughter. One day, the daughter, Mio, tells him that the man is not her father and she doesn’t know him at all.

Variety wrote:
The title says it all in the latest psychological thriller from Japanese horror maestro Kiyoshi Kurosawa.

Not since “Bad Boy Bubby” has plastic wrap been put to such scary use on screen as it is in “Creepy,” Kiyoshi Kurosawa’s nail-biting thriller dominated by a psychopath who exerts a malevolent hold on his neighbors. Ostensibly a character study of skin-crawling weirdness, the film finds the Nipponese chiller-maestro exploring his favorite themes of familial discord and communication breakdown. But while some critics have hailed the pic as a return to Kurosawa’s earlier “straight” horror films, like “Pulse” or “Cure,” it in fact represents a conscious move away from past phantasmagoric stylizations to evoke the horrors of modern existence in plain sight and form. The result should creep into nearly every niche for Asian genre films.

Kurosawa shares writing credits with quirky indie helmer Chihiro Ikeda in this adaptation of Yutaka Maekawa’s award-winning mystery novel. As with “Penance,” working from an original literary source has helped steer the helmer away from the fuzzy endings that plague his own scripted works, and toward a tighter structure and punchier resolution.

Described as oni (demon) by one of his victims, the villain, who thrives on inciting others to violence, is presented as not quite human — either a mysterious disruptive force in society or an alter ego of other Kurosawa phantoms, like the screaming ghost in “Retribution.” Ironically, the film also implies that Japanese families are destroying each other without outside help, as evidenced by the wall of icy indifference that surrounds the protagonists in their genteel neighborhood. Loneliness breeds vulnerability to scams, bullying and brainwashing of a sort that’s endemic in Japan, of which the psychopath is a symbolic catalyst.

In a tense prologue, senior detective Koichi Takakura (Hidetoshi Nishijima) tries to use his theories on psychopaths to defuse a hostage situation, with disastrous consequences. A year later, he’s quit the force to take up a cushy position as a lecturer on criminology and moved into a suburban house with his pretty wife, Yasuko (Yuko Takeuchi), and big fluffy pooch, Max.

Yasuko goes out of her way to befriend the neighbors, who bluntly indicate they want to be left alone. The only exception is Nishino (Teruyuki Kagawa, “Penance,” “Tokyo Sonata”) from the secluded house next door. Hostile one minute and smarmy the next, he’s so inscrutable that even his teenage daughter, Mio (Ryoko Fujino), seems to recoil from his show of affection. One would think a well-bred bourgeois wife like Yasuko would run a mile from this weirdo, yet she keeps prying into his family life, and even invites him into her home.

Meanwhile, Takakura is approached by his former assistant Nogami (Masahiro Higashide) to help reopen a cold case from six years ago. Three members of the Honda family have disappeared without a trace or reason, leaving youngest daughter Saki (Haruna Kawaguchi) behind. They track down the teenage girl, who recalls that weeks before the incident, she’d overheard her parents talking on the phone in alternate tones of extreme elation and agitation, as if under hypnosis or a spell.

How these two plot strands eventually converge, in a ghastly denouement, hinges on a masterful buildup of esoteric clues, ominous atmospherics and inklings of doubt that the characters can’t quite put a finger on. For instance, Takakura’s hunch that the Hondas’ deserted house “looks like a crime scene,” even though no crime has been committed there, is echoed by Yasuko’s sense of something being amiss when she sets foot inside Nishino’s house. There’s also an uncanny resemblance between Saki and Mio, with their respective frightened-animal looks.

The horror finally spills out around 90 minutes into the film, and it’s guaranteed to make the sight of any large plastic bag utterly cringe-worthy. Notwithstanding various improbabilities — like how easy it is to evade the police, who never think of calling for reinforcements — the film supplies a headlong rush of tension and cruelty all the way to a gratifying final payoff.

Compared with most love relationships in Kurosawa’s oeuvre, in which male protagonists are either uncaring or murderous to their wives or girlfriends, the protagonists here seem to be an ideal couple; they spend quality time together and pick up on each other’s minor irritations. But the film reveals the cracks in their marriage so stealthily that it’s as shocking as any of the other plot twists when Yasuko says late in the yarn, “I have given up a lot a long time ago,” and her illogical behavior suddenly makes perfect sense.

Likewise, Takakura’s cool intelligence gradually comes to look more like a complacent over-reliance on academic theories (echoing Maekawa’s professor background), which are proven wrong again and again. It is only when he panics and surrenders to gut reactions that he notices his wife’s loneliness and desperation, which puts the film on the same emotional wavelength as “Tokyo Sonata,” “Real” and “Journey to the Shore,” all of which move toward healing rather than dredging up guilt and retribution like the works before them (“Penance” excluded).

Nishijima is a bit typecast as the handsome, courteous yet tightly wound professional, but he steps up emotionally in the brutal scenes. Lulling the audience into thinking hers is another stock portrayal of a classy, imperturbable beauty, Takeuchi unravels in enigmatic and gripping fashion, culminating in what sounds like the heart-rending howl of a wounded beast. During a lecture, Takakura tells students that among serial killers, one type is so erratic that it’s beyond analysis; Kagawa has a well-stocked cache of uncanny expressions to capture that unpredictable and repellent state, but his character is essentially a one-dimensional void.

Tech credits are seamlessly low-key, reflecting Kurosawa’s clear aesthetic decision to discard the formalist architecture of “Loft” and the stylized color play of “Cure” and “Retribution.” Akiko Ashizawa, who has lensed Kurosawa’s works since “Loft” (in which Nishijima also starred), composes clean, compact shots that deliberately downplay the danger and trauma at hand. Produciton designer Norifumi Ataka (“Norwegian Wood,” Kurosawa’s “The Seventh Code”) captures Tokyo suburban life with impressive verisimilitude, and with dirt and ugliness unceremoniously accumulating around the corners. Music and sound are never used to ramp up the horror factor, while deft touches, like a sudden dimming of lights, register with chilling impact. The film’s Japanese title translates as “Creepy: Fake Neighbor.”