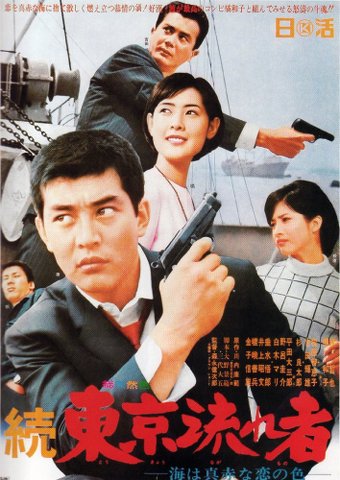 Quote:
Tokyo Drifter stands with Branded to Kill as one of the best-known and most acclaimed films of Seijun Suzuki, one of Japan’s most talented maverick directors. A colorful riot of an action drama, Tokyo Drifter, like many of Suzuki’s films, transforms a standard gangster film plot into a vehicle for his own loopy brand of filmmaking, featuring gorgeous cinematography, unconventional storytelling techniques, and a dark sense of humor. This particular example centers on Tetsu, a yakuza member who, when his gang is disbanded, remains loyal to his boss and attempts to go straight. This is no easy task, however, as the yakuza are determined to get him back into the life — or kill him if he refuses. The pressure soon forces Tetsu to go on the road, becoming the “Tokyo drifter” of the title, but even this is not enough to prevent his past from violently catching up with him. The film’s choreographed action and vibrant color palette make the frequent action sequences, including one of the most raucous barroom brawls ever put on film, seem almost like musical numbers, resulting in a spectacularly entertaining and truly original take on the gangster drama.