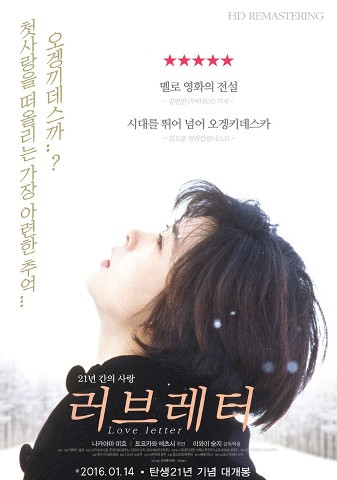 IMDB plot summary: Hiroko Watanabe’s fiancee Itsuki died two years earlier in a mountain climbing accident. While looking through his high school yearbook, Hiroko in a fit of grief decides to write a letter to him using his old school address. Surprisingly she receives a reply, not from her dead husband, but from a woman also named Itsuki whom had known Hiroko’s husband in school. A relationship develops between the two women as they continue to exchange letters and share memories of the dead Itsuke.

New York Times review: ‘When I Close My Eyes’: An Intriguing Evocation of Grief
By STEPHEN HOLDEN

NEW YORK — Love, fear and revulsion are some of the feelings movies are particularly adept at conjuring, but grief is much more elusive because it’s so private. How do you evoke the inner life of a solitary mourner mutely contemplating the world from behind an emotional shroud?

“When I Close My Eyes,” the feature film debut of the Japanese director Shunji Iwai offers an intriguing narrative platform from which to experience the sadness of its bereft central character, Hiroko Watanabe (Miho Nakayama).

The film begins at a memorial service two years after the death of her fiance in a mountaineering accident. After the ceremony, Hiroko, who lives in Kobe, discovers her lover’s high-school yearbook while sorting through his belongings. Finding what she assumes is his old address in the back, she impulsively writes him a letter and mails it, as though she were sending a note to heaven, without expecting an answer.

In a stunning coincidence the letter is delivered to a young woman, Itsuki Fujii, who not only has the same name as her dead lover but was in his high school class in Otaru, a town in northern Japan. A correspondence that begins tentatively intensifies when Itsuki, at Hiroko’s request, begins raking her mind for memories of the classmate with whom she was continually confused because they shared the same name.

As old memories are awakened, the movie flashes back to scenes of the pranks played by classmates on the two Itsukis, who developed a secret bond even while professing to resent each other for having the same name and being tormented for it. When they worked side by side in the school library, the male Itsuki (Takashi Kashiwabara) played a hide-and-seek game involving library cards and hidden books that a younger generation of students working in the same library has discovered and elevated into a kind of school myth.

Adding metaphorical richness to the movie, which at moments recalls Krzysztof Kieslowski’s “Double Life of Veronique,” is the fact that Ms. Nakayama plays both Hiroko and the grown-up Itsuki, who turn out to have a twinlike physical resemblance, although their personalities are very different.

Itsuki, moreover, has also suffered a loss. Not long ago, her father died of pneumonia on the way to the hospital. And Itsuki, who when first glimpsed is suffering from a bad cold, has nightmares that she too will be suddenly stricken. Eventually Hiroko and her fiance’s best friend, Akiba (Etsushi Toyokawa), who is in love with her and wants to marry her, travel to Otaru. Akiba hopes that Hiroko, by meeting her correspondent, can shake off the ghosts of the past and begin loving him.

“When I Close My Eyes,” which opens Friday at the 59th Street Theater in Manhattan, swirls with unsettling notions of multiple identity, memory and parallel lives.

Midnight Eye Review by Tun Shwe
We all have memories; some that we would love to keep alive forever and some that we would sooner love to forget. When Marcel Proust wrote “A La Recherche Du Temps Perdu (Remembrance Of Things Past)”; in the 1920s he had no idea of the significance that his book would have upon the characters in Shunji Iwai’s Love Letter, over half a century later. Iwai’s story follows its protagonist, Hiroko, on a cathartic journey to free her mind of the deep love for her late fiancé, Itsuki. The act of writing what she thought was a simple last letter to Itsuki yields repercussions beyond the boundaries of her expectations.

For some, closure involves a prayer or a memorial service. For Hiroko Watanabe (Nakayama), it took the simple act of writing and posting a love letter to her deceased fiance, Itsuki Fujii, who passed away 2 years previously in a mountaineering accident. After Itsuki’s memorial ceremony she visits his mother’s house. There, she learns of Itsuki’s childhood home in Otaru and via his high school yearbook, finds out the address. After being informed by his mother that the house had been demolished to make way for a new freeway she attempts to bury her feelings for him by writing him a letter. Only a few lines in length, it simply asks of his health and informs him of her own well-being. She posts it to him with the knowledge that it is a correspondence that will only make a one-way trip; a letter that would not have a recipient.

Picked up by the wave of surprise and sentiment upon receiving a reply signed from Itsuki Fujii; Hiroko drifts into dreams of an alternate reality where her letter reaches Heaven and her reply comes straight from the hands of the love of her life. After finding out that a woman with the alleged same name as Hiroko’s ex-fiance was responsible for the reply, Hiroko’s new would-be fiance Shigeru (Toyokawa) convinces her to leave their hometown of Kobe and accompany him to Otaru to meet her ex-fiance’s female namesake as well as his mountaineering companions. Although persuasive, Shigeru is affectionate and understands that Hiroko must attain her catharsis before she can comprehend the possibility of consummating their own relationship, and this trip is planned with that in mind. But, by strange matters of chance, Hiroko and Itsuki never manage to meet face to face.

With references to Proust’s “A La Recherche Du Temps Perdu,” its commonly translated title “Remembrance Of Things Past,” mirrors Itsuki’s journey into storytelling the days of her adolescence whereas the literal translation of “Research For Lost Time” more closely describes Hiroko’s yearning excursion into trying to remember the things she loved in her fiance. Although Hiroko chooses to hold back on some facts in her letters, Itsuki keeps her letters complete and each one reveals more of the boyhood Itsuki’s quirky introverted nature and the many taunts they endured throughout junior high for sharing names.

The onus is lifted from Hiroko when she realises that the relationship with her fiance was not as simple and heartfelt as she had believed. The strong bond between the pen pals is expressed when Itsuki decides not to disclose her final memory of him after learning of his passing away from her old school teacher.

Although already known in some circles with his previous films, Fried Dragon Fish (1993) and Undo (1994), Iwai burst into the mainstream with Love Letter as his theatrical debut feature and immediately captivated audiences by showing off his mastery at capturing breathtaking scenery. This was acknowledged with it picking up several awards for direction (17th Yokohama Film Festival, 21st Osaka Film Festival) and production (17th Yokohama Film Festival, 21st Osaka Film Festival, 19th Japan Academy Awards). Iwai later went on to provide further exhibits of his ability in Swallowtail Butterfly (1996) and April Story (1998), a story with similar sentimental overtones, but with Love Letter he has written a sequence of thought-provoking moments that have effectively been adapted to preserve the air of melancholy and lightheartedness in the transition from paper to film. Some moments are sure to evoke one’s own past memories and some would surely provoke a gentle chuckle, but the whole experience leaves overall warmth inside.

Iwai’s choice of presenting Hokkaido island’s sleepy town of Otaru in a scoped aspect ratio helps enrich the story’s depth of field and gives its environment an almost dreamlike shimmer, moulded from layers upon layers of comminuted white shroud. Furthermore, the illusion of Otaru being a magical domain is rendered by the film’s one element: the choice of Nakayama playing the role of both Hiroko and Itsuki.

Each scene plays with the consistency of fuel for the fire of nostalgia and Iwai has seemingly gone out of his way to craft an impossibly beautiful story, reminding us that some of the things we believe and hold dearly in our memories may not be things that are true. Coincidences pave ways for good discoveries and help tempt realisations for happenstances of the heart. Love is lost and love is rediscovered every single day in the world and Love Letter is a testament to these often implicit times.