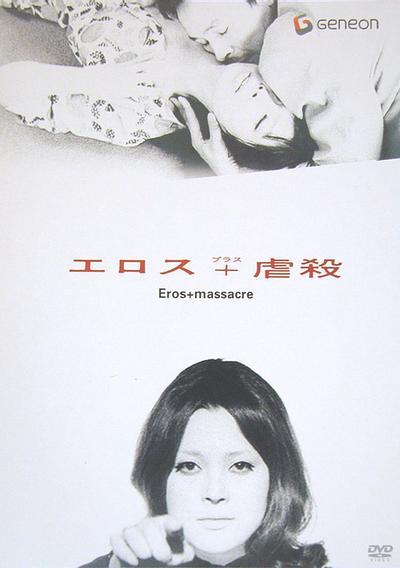 Synopsis:
In the 20’s, the anarchist revolutionary Sakae Osugi is financially supported by his wife, journalist Itsuko Masaoka. He spends his time doing nothing but philosophizing about political systems and free love and visiting with his lovers Yasuko and the earlier feminist Noe Ito. He conveniently defends three principles for a relationship between a man and a woman: they should be financially independent (despite the fact that he is not); they should live in different places; and they should be free to have intercourse with other partners. In 1969, twenty year-old student, Eiko Sokuta, has an active sexual life, having sex with different men. Her friend, Wada, is obsessed with fire and they usually play weird games using a camera while they read about Osugi and Ito.

Review:
The masterpiece of Yoshida Yoshishige is Erosu + Gyakusatsu (Eros Plus Massacre). Few films in the Western cinema are as freely disjunctive and as dialectical in their approach to narrative space-time. The mythical space-time of Teshigahara, in contrast, simply tends to dissolve chronology along with the historical
dimension as such. This film offers, moreover, a remarkable reading of the new theatricality, memorable embodiments of the archetypal «madman», as well as an empirical but provocative use of strategies borrowed from traditional art, notably the principle of de-centred composition. These are allied with more directly Brechtian procedures, such as theatricalized interpolations, title boards, mixtures of historical fact and fiction, past and present, etc. The films length precludes a full-scale analysis. It is a three-and-a-half-hour fantasmagoria around the life and death of a noted Japanese anarchist, Ôsugi Sakae, killed by the police with one of his lovers and his nephew early in this century.
— (Noël Burch, «To the Distant Observer», Berkeley: University of California Press 1979, pp. 348f.)