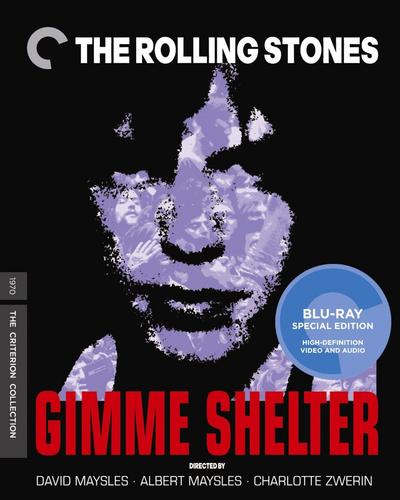 Synopsis:
A harrowing documentary of the Stones’ 1969 tour, with much of the focus on the tragic concert at Altamont. 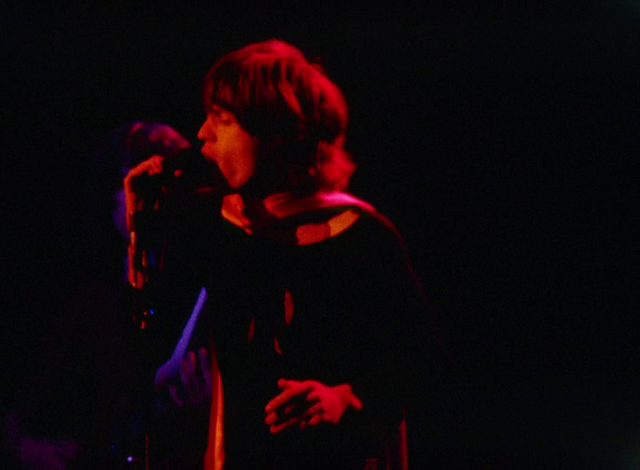 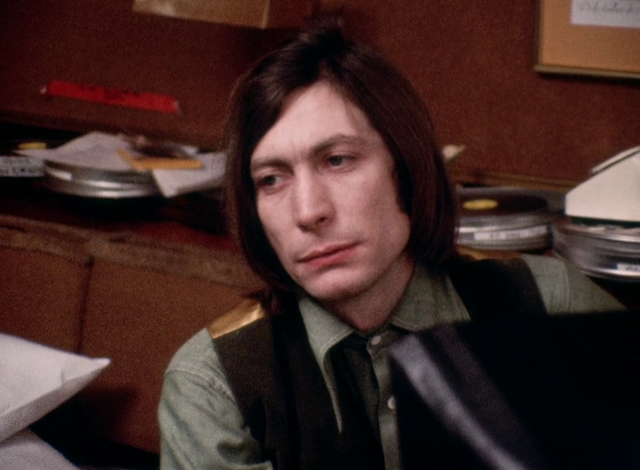 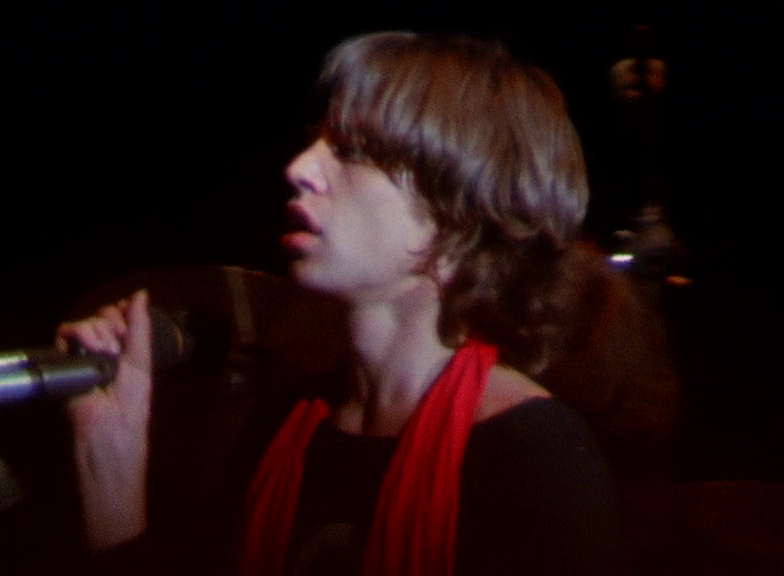 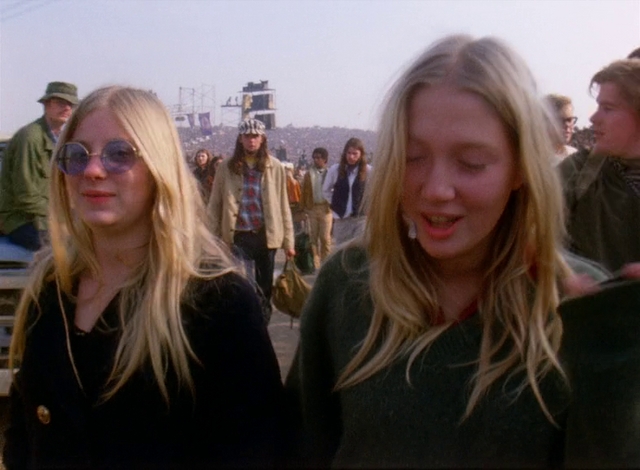 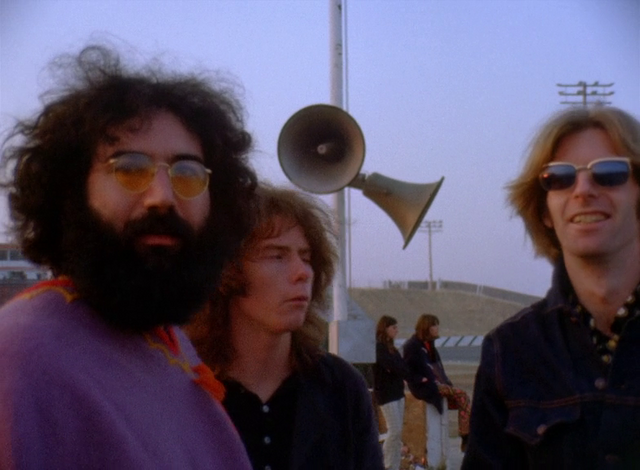 Gimme Shelter documents the last ten days of the Rolling Stones’ 1969 North American tour, from the ecstatic appearances at Madison Square Garden on Thanksgiving weekend to the disastrous free concert on December 6 at the Altamont Speedway near San Francisco. An estimated three hundred thousand people flocked to Altamont, and four of them were killed there. Among the dead was Meredith Hunter, an eighteen-year-old black man. Hunter was stabbed by one of a group of Hells Angels, who were acting as security guards. The stabbing and subsequent beating of Hunter’s near-lifeless body occurred within feet of the Stones, who were midway through their set at the time. As Mick Jagger launched into “Under My Thumb,” the Angels, out of control for hours, assaulted Hunter, who had pulled out a gun. He was quickly disarmed and killed.

The event was captured on film by Gimme Shelter’s camera crew. Shooting from the stage, the filmmakers couldn’t make out exactly what was happening, but they sensed it was dire.

“It looked like a scuffle,” says Jagger, as he sits with David Maysles at the editing table, watching an early cut of Gimme Shelter, a film that began life as a concert tour documentary but turned into something more complicated and disturbing. It weaves together the before and after of Altamont, opening with an electrifying performance of “Jumpin’ Jack Flash”—Jagger gleefully vamping and taunting the Garden crowd—and then immediately shifting to the editing room, where a kind of postmortem is taking place. A worried Jagger smiles wanly at his own image on the small flatbed screen and listens with consternation to tapes of rock-radio news about Altamont.

By the time Gimme Shelter was released in 1970, the media coverage of Altamont was beyond saturation. Although some cultural critics teased out the contradictions, the dominant tendency was to mythologize the event as the nail in the coffin of the sixties, and Jagger as the Lucifer who called it into being.

Gimme Shelter, on the other hand, is a masterpiece of restraint and understatement. It begins with a single moment of innocence—the Madison Square Garden performance. What we see on Jagger’s face is not merely insolence but joy—the joy that extraordinary performers experience when they surprise themselves in public. The joy went out of the Stones years ago, and more than their wrinkled skin and stiffened knees, its absence makes them seem old as performers. But with that Garden performance, the Stones earned the right to their arrogance. That arrogance (if Gimme Shelter were a Greek tragedy, we’d call it hubris) would act as a blinder in the days ahead, as they plunged into preparations for a free concert, impulsively conceived and shoddily planned.

In the next scene—in which, weeks later, Jagger watches the film on the editing table—the fall from grace has already occurred. The time frame of this scene is complicated because what Jagger is watching is a version of the film we’re about to see. Gimme Shelter is constructed as a film within a film, and more importantly, as a series of flashbacks. We know, almost from the beginning, what happens at the end. And this advance knowledge creates an undercurrent of dread that pervades even the most carefree sequences.

Running a taut ninety-one minutes, Gimme Shelter devotes its entire second half to the Altamont concert. Here the drama takes precedence over the music. The first half of the film, however, contains at least three songs, shown in their entirety, that demonstrate why the Stones deserved the title they bestowed on themselves: the World’s Greatest Rock-and-Roll Band. In the stage performances of “Jumpin’ Jack Flash” and “Satisfaction,” the sound (thanks to the new mix) is as crisp—not to mention as overwhelming—as I remember it being at Madison Square Garden, and Albert Maysles’s handheld camera work is fluid and incredibly sensitive to the music.

The film portrays the Stones as workaholics and perfectionists. There’s no sex, no drugs, just rock and roll on this tour. (Maybe that’s really the way it was, or maybe the filmmakers knew what they had to leave out in order to get the Stones to sign a release.) Between concerts, the Stones fit in a recording session at Muscle Shoals, where we see them playing back a fresh recording of “Wild Horses.” Just a bunch of rock stars listening to themselves, trying to fight off the self-consciousness they feel when the camera gets close. Some of the most revealing moments occur not when Jagger lets down his guard (he almost never does) but when he tries to project an image of himself as he thinks he should be. Jagger is never as comfortable inside his own skin as when he’s performing, which, in part, is why he’s a great performer. The release he experiences onstage is palpable to the audience. And so is his sense of control—of himself and the thousands who hang on his every gesture and sound.

The most extraordinary moment in the film occurs during the Altamont concert, when Jagger loses control of the crowd and realizes that he has failed to give the devil his due. He’s barely gotten out the first line of “Under My Thumb” when a look of bewilderment mixed with recognition comes over his face, as if he’s hearing the lyric for the first time—hearing it from the outside, as the three hundred thousand assembled fans are hearing it—and we see it dawn on him that he may be complicit in the violence that has crossed the line from collective fantasy to reality.

Gimme Shelter neither blames the Stones nor lets them off the hook, although compared to the Angels and the kids crowding the stage, stoned on bad acid and speed, they seem like the good guys. “It’s so horrible,” says Jagger toward the end of the film, watching the shot of Hunter’s murder running forward and backward in slow motion on the editing table, as if—as was believed of the Zapruder film—it could show us the truth. There is a multiplicity of truths in Gimme Shelter; putting them together is up to us.