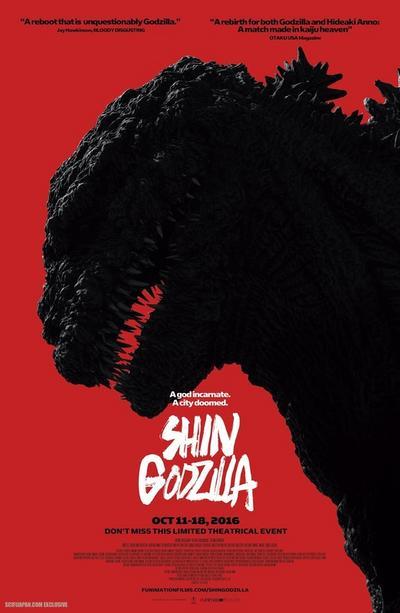 Synopsis:
It’s a peaceful day in Japan when a strange fountain of water erupts in the bay, causing panic to spread among government officials. At first, they suspect only volcanic activity, but one young executive dares to wonder if it may be something different; something alive. His worst nightmare comes to life when a massive, gilled monster emerges from the deep and begins tearing through the city, leaving nothing but destruction in its wake.

As the government scrambles to save the citizens, a rag-tag team of volunteers cuts through a web of red tape to uncover the monster’s weakness and its mysterious ties to a foreign superpower. But time is not on their side – the greatest catastrophe to ever befall the world is about to evolve right before their very eyes.

It’s been 12 years since the last Japanese-produced Godzilla movie (though Gareth Edwards’ 2014 American effort in no way disgraced the franchise), and reportedly Toho Studios wanted to shake things up for their 29th effort. In hiring Hideaki Anno (creator of anime Neon Genesis Evangelion), who writes and co-directs Shin Godzilla with Shinji Higuchi (the live action Attack On Titan films) they definitely achieved that, though probably not in the way many expected. With the 2011 Tohoku earthquake and associated Fukushima nuclear disaster providing prime metaphorical material for Godzilla – originally created as a metaphor for the atomic bomb – this takes the giant monster genre in directions that may take a little getting used to.

To wit: when what seems to be a steam explosion floods a motorway tunnel running under Tokyo Bay, much of the next 30 minutes takes place in various meeting rooms as elements of the Japanese government hold meeting after meeting as they try to formulate a response (any similarity to the Japanese response in 2011 is no doubt purely intentional). Every government member has their full name and title come up on the screen even if we never see them again; one meeting has a cut to black in the middle of some underling’s speech as “following abbreviated” flashes up. Yet it’s never boring, as while all these people are trying to figure out whose responsibility the as yet-minor disaster is, slowly footage is coming in that confirms the out-of-nowhere suspicion from Deputy Chief Cabinet Secretary Rando Yaguchi (Hiroki Hasegawa) that what’s causing all the commotion is some kind of giant creature.

Anno takes his time revealing his monster, instead having it wade up ever narrower rivers, a solid wall of crushed boats and debris pushed ahead and spilling out onto surrounding streets. When it finally does make land, it doesn’t look much like a Godzilla we (but not the characters in the film – Shin Godzilla takes place in a world where Godzilla has never appeared before) would recognise. It turns out this version is capable of directing its own evolution, and the initially almost rat-like, bug-eyed, blood gushing creature is not its final form.

Yes, long stretches of this film are about government ministers trying to figure out whether they even have the authority to call in the military on what they initially see as a pest control problem. But in this context all the rule-following and political jockeying – Yaguchi eventually leads an ad-hoc committee of governmental misfits (nerds and biologists mostly) who come up with the only possible solution to the ever-widening destruction that doesn’t involve the US dropping a nuke on Tokyo – shows humanity as something that can only match Godzilla when acting as a group. Individuals simply don’t matter, and pretty much the entire cast are barely sketched in; when you’re up against what’s basically a god, you hang together or you hang separately.

Those used to more US-levels of movie carnage may be slightly disappointed that this doesn’t wrap up with insane levels of climactic destruction, especially after a middle sequence featuring Godzilla displaying both his ability to survive massive levels of military ordinance and his power to deal out devastation on a jaw-dropping scale. On the other hand, there are train bombs (like car bombs, only trains), and while the special effects aren’t amazing, they’re always up to the task of getting across the fact that when you get in Godzilla’s way you are going down.

The political commentary and allegory in Shin Godzilla is in no way subtle – there are actual photos of Hiroshima used at one stage – and the anti-US rhetoric is slightly hamstrung by casting the not even slightly American-seeming Satomi Ishihara as US Special Liaison Kayoko Ann Patterson. But as a giant monster movie this is gripping viewing from start to finish. Its vision of Godzilla as a remote, incomprehensible creature that barely even notices humanity, its blood-red atom heart pulsing through black rolling clouds of destruction as Japan burns, is not easily shrugged off.