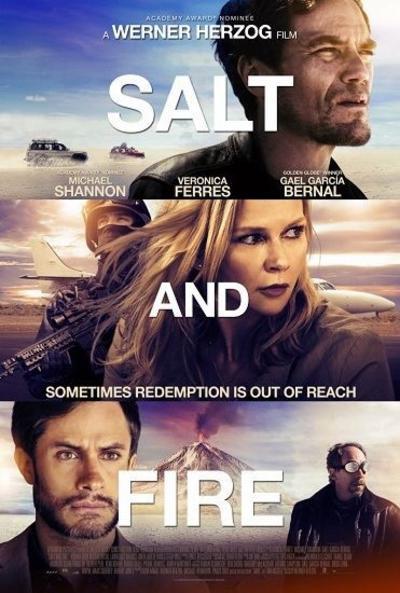 Two ecologists (played by Veronica Ferres and Gael Garcia Bernal) are sent to South America as part of a U.N. investigation into an ecological disaster. They are quickly kidnapped by the villainous CEO (played by Michael Shannon) of a large company held responsible for the ecological disaster. But when a supervolcano nearby begins to show signs of erupting, they must unite to avoid a disaster.

Quote:
Eco Thriller with Twist
Being afraid of the dark is one thing, yet being afraid of the light is far worse. A United Nations delegation composed of three scientists, Laura, Krauss and Fabio (Gael Garcia Bernal), visits the Uyuni salt flats of Bolivian in order to help draw attention to an environmental tragedy taking place. However, as soon as the delegation lands its members are kidnapped by a militia controlled by businessman Matt Riley (Michael Shannon). As in paintings where the images change depending on the angle from which they are viewed, what Riley wants with the scientists gradually comes into focus in a thrilling and ingenious way.

The film’s location practically steals the show; an immense salt flat with a looming super volcano. Fortunately the setting is not the only aspect of the film that is thrilling. Capable acting and directing, and an intriguing environmental theme, combine with other elements to make Salt and Fire a compelling picture. I love the intellectual candy including great quotes from Alexander the Great and Ecclesiastes. Sometimes, however, it is a little too awkward and slow moving. More oomph/depth is needed at critical points. Gael Garcia Bernal is wonderful and funny, but he has just a minor part. There is a fantastic twist at the ending. – by raven-64-833785, imdb.com

Quote:
Yet even after 70-odd films, Herzog continues to push himself – and his collaborators — to extreme places, and “Salt and Fire” is no exception. A meditative and at times surreal thriller starring Michael Shannon and Veronica Ferres, it was shot in the remote high-altitude salt flats of Bolivia.

“Salt and Fire” is a kidnap drama set against a vague but ominous ecological disaster Herzog contrived called El Diablo Blanco. A multinational conglomerate headed by Shannon’s character has inflicted some unspecified havoc on the Bolivian landscape, causing the salt flats to multiply with terrifying speed; Ferres, playing a scientist, has been sent as head of a U.N. investigatory unit. – by Julie Makinen, Los Angeles Times