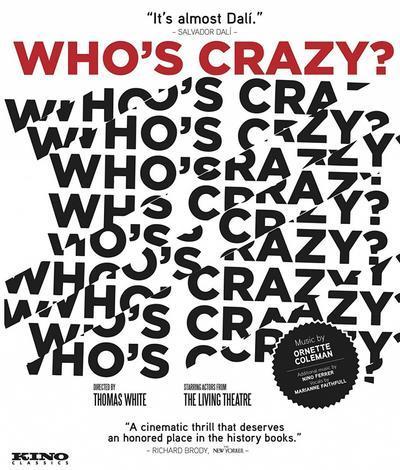 The story behind the rediscovery of “Who’s Crazy?,” a 1965 film directed by Thomas White that’s screening at Anthology Film Archives tonight through Sunday, is so unusual that it raised my suspicions along with my curiosity. The movie screened at the Cannes Film Festival in 1966, but it hasn’t been shown publicly since then and was widely believed to be lost. (Also, White never made another feature.) In its absence, the movie was famous for its soundtrack—in particular, for its music score, by the central jazz modernist Ornette Coleman and his trio.

The producer and director Vanessa McDonnell, a fan of Coleman’s music, contacted archivists far and wide in search of the film, all of whom told her that they believed the film to be lost. But she wouldn’t take “lost” for an answer and began to call all the Thomas Whites in the phone book until she found the right one, the Thomas White who lives in Connecticut and told her that he had a print of his film in his garage.

The weather-worn print was cleaned and repaired by John Klacsmann, of Anthology; a digital copy is what’s being presented. As a lifelong Colemaniac, I hastened to a press screening of “Who’s Crazy?” as if lured by catnip. But due to this age of archive fever, in which many rediscovered movies ballyhooed as lost masterworks turn out to be notable only for their rarity, I was dubious in advance. I figured that if the movie were as minor as I feared it might be, I could always just close my eyes and listen. As it turns out, “Who’s Crazy?” is—well, I hesitate to use the M-word, “masterwork,” because mastery is beside the point, but it’s a cinematic thrill, an artistic achievement that deserves an honored place in the history books. The film is true to the avant-garde passions that it embodies and reflects. It gets to the very essence of movie-going and transfigures the concept.

“Who’s Crazy?” was filmed—in raw and bleak black-and-white—in rural Belgium and features members of the New York-based Living Theatre troupe (minus its founders, Judith Malina and Julian Beck), as inmates in a mental institution who are being transported by bus. When the bus breaks down in a lonely place in the wintry countryside, an inmate runs for it. When two guards hustle to recapture him, the rest of the patients all escape and elude the guards. Making their way to a desolate and abandoned brick farmhouse, the uniformed patients find a way in, take shelter, and construct, in isolation, an antic yet earnest domesticity that summons the Living Theatre troupe’s wide and wild range of improvisational inspirations.

Yes, there’s a tremendous amount of superb music by Coleman on the soundtrack. He and his cohorts in the trio, the bassist David Izenzon and the drummer Charles Moffett, recorded the score in a Paris studio while watching a screening of the movie. This trio (as heard in their 1962 Town Hall recording, and, most famously, in “At the Golden Circle,” the two-volume album recorded in December, 1965, in Stockholm) were instantly responsive to the leader’s sudden changes of tempo and tone, which is exactly what arose in the group’s performance for the movie’s soundtrack. Much of Coleman’s performance features him not on the instrument for which he was famous, the alto saxophone, but on the trumpet and the violin, which he had only recently taught himself to play. His technique on those new instruments was scant, but his expression was profound; he relied on them to break through musical form in quest of pure sonic experience, and the mood-rich sounds that he made were ideally suited to the needs of the movie. (His playing of the trumpet and violin are even more effective as a movie score than as concert music.)

What goes on in the house among the escaped patients is no mere romanticizing of insanity as some higher or purer state. “Who’s Crazy?” isn’t a work of sociology or psychology, and it isn’t a literal depiction of mentally ill people (or a literal depiction of anything). It’s a depiction of people confined in an institution and forced to wear uniforms, who seek to be free and, upon gaining their freedom, quickly test and stretch that freedom with a kind of play that tilts their lives into art.

From the start, the actors’ outburst of liberation is marked in cinematic terms—the prisoner who makes the initial run for it does so with leaps and flourishes borrowed from Charlie Chaplin, and the guards give chase in implausible slapstick lurches and blunders. The first liberation that the patients enact is itself artistic—the casting-off of the conventions of movie logic and realistic drama in favor of the improvised and freewheeling spirit of Mack Sennett comedies. (One superb shot—of two inmates who are playing a jack-in-the-box version of hide-and-seek, until interrupted by a perky dog—displays comic timing that Hollywood directors could envy.) White and his actors aren’t suggesting that insane people are sane, but that what’s taken for sensible artistic order, especially in the movies, often displays no creative sense.

That’s true of social order as well. The escapees don’t talk very much. Maintained in ignorance, afflicted with anomie, desperate to connect, they imitate domestic life with a sense of a vast spiritual quest, a search for identity that’s no less urgent for its raucous comedy. “Who’s Crazy?” transcends the facile dichotomy of artifice and authenticity to locate a higher authenticity in stylized and artificial cosplay. The first thing that the inmates do in the farmhouse is get rid of their uniforms and don the clothing that they find in trunks upstairs—the women first, then the men follow along—and they continue with increasingly extreme tricks of makeup and self-adornment, of exuberant yet reckless parodies of the banal chores and needs of daily life.

The playfulness of the loose theatrical improvisations exposes a burning core of mystical energy. When a dapperly dressed man goes into an open-eyed trance, his cohorts chant to bring him back with an increasingly frenetic howl that’s matched by Coleman, on the soundtrack, playing the violin ever more frantically. The increasingly elaborate occult games include fitful alchemical conjurings replete with bursts of flame, and the actors’ performances—and the cinematography, by Bernard Daillencourt—match their expressive flash. (The movie’s taut and free editing is by one of the greatest of editors, Denise de Casabianca, who cut most of Jacques Rivette’s early films, including “Out 1,” as well as Jean Eustache’s “The Mother and the Whore.”)

The primal energy of dancing and chanting, running and jumping, and exulting in a newfound freedom is amplified by the free and fast, mercurial and thrusting, stunned and wide-eyed camera work. Then, after the byways of a few loose dramatic scenes (including a kangaroo court around a long dining table), the churning and thrashing of the actors is transformed into scenes of ritualistic pressure: a mock-solemn wedding in tin-foil décor that nonetheless turns truly holy.

I have a French bootleg of the trio’s studio performance for the film. As fine as it is, it’s even better as a movie score than as a freestanding recording, in large measure because White mixes it boldly into the soundtrack. He integrates sound effects, live sound, speaking, and chanting into the trio’s recordings, intercutting and overlapping Coleman’s music and other music (notably, by a rock/blues trio featuring organ, bass, and drums) and with the voices of other singers (including Marianne Faithfull, who performs the Coleman composition “Sadness,” which he recorded at the 1962 Town Hall recital). The result is a dense sonic collage that turns the Coleman trio’s free jazz into a crucial element of White’s own free cinema.

White’s direction may be loose, but its purpose is clear. As he merges the slapstick of silent comedy with landscape painting of a stark intensity that captures the spiritual striving of the Nordic strain of art cinema (including a wickedly funny parody of the “dance of death” scene from Ingmar Bergman’s “The Seventh Seal”), he makes clear that the transcendence of the new freedoms will be physical—a calculatedly exaggerated outpouring of song and dance freed from familiar forms and conventions, an urgent liberation of the body without which there’s no freeing of the soul. “Who’s Crazy?” seems made to propel viewers out of their seats to exult along with it in a state of cinematic possession, to break the contemplative boundaries of viewership and to break the bounds of the movie screen, in order to turn the movie theatre into an actual theatre in which exultant and frenzied viewers are integrated with the action of the Living Theatre itself.

The movie’s playfulness is easy to mock or demean (it could be called an accidental Monty Python) in exactly the way that advanced artistic modernity over-all, which deepens by simplifying (whether by Pollock or by Warhol, whether with Coleman’s fiddling or John Cage’s silence), invites mockery. Yet, like the works of the era’s other innovators, “Who’s Crazy?” exists not as a concept or a challenge but as an experience, one that’s invented for a particular place and moment, which is why the provocative, implicitly but essentially communal revelry of the film—though I hope it will soon be available widely for viewers everywhere, on home video—is urgently and essentially a movie-theatre experience on the very subject of the movie-theatre experience. It makes the screenings at Anthology this weekend all the more urgent. 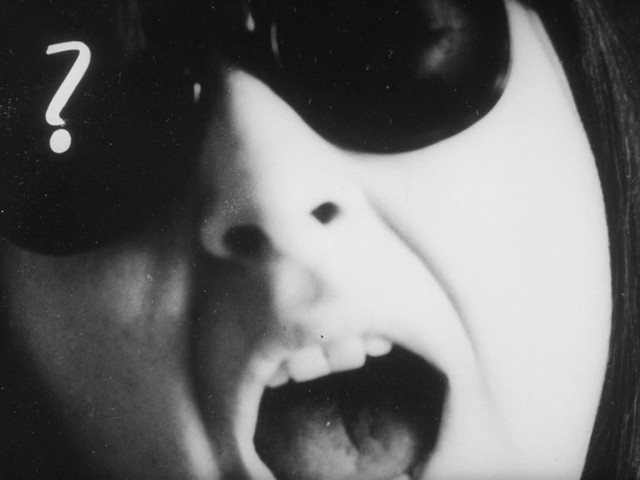 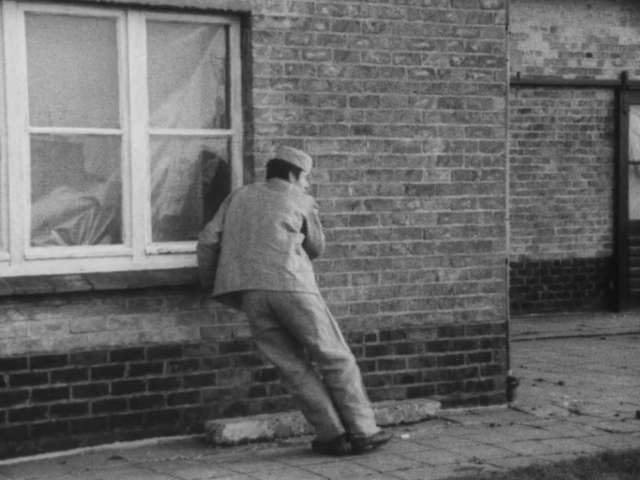 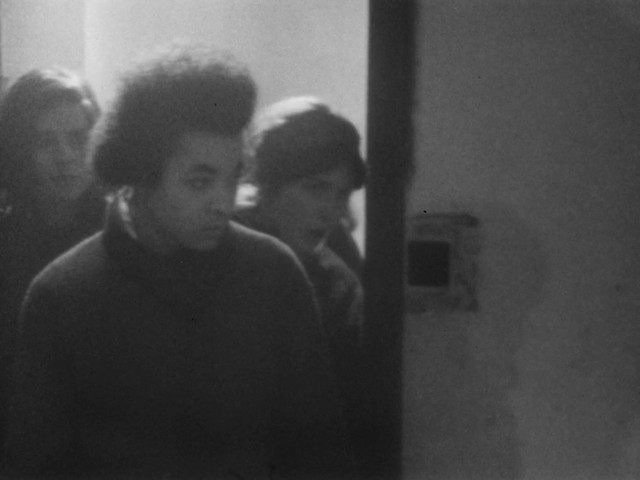 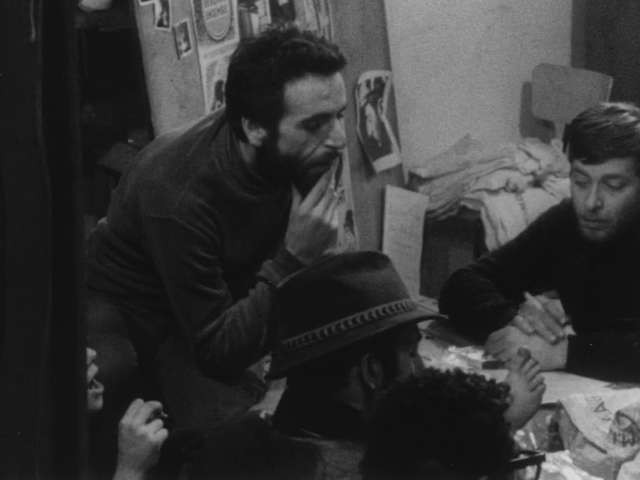 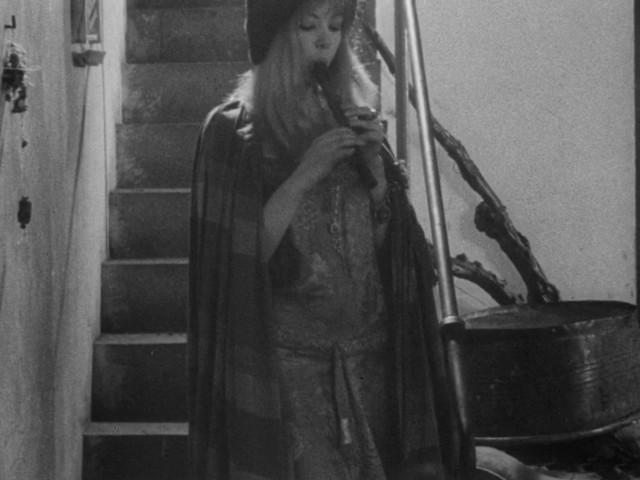 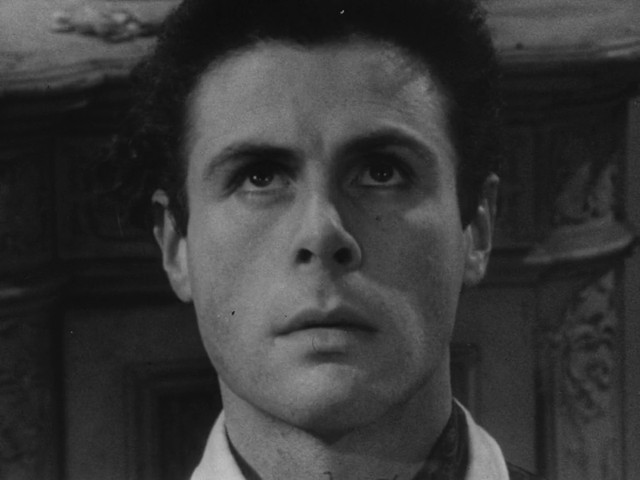