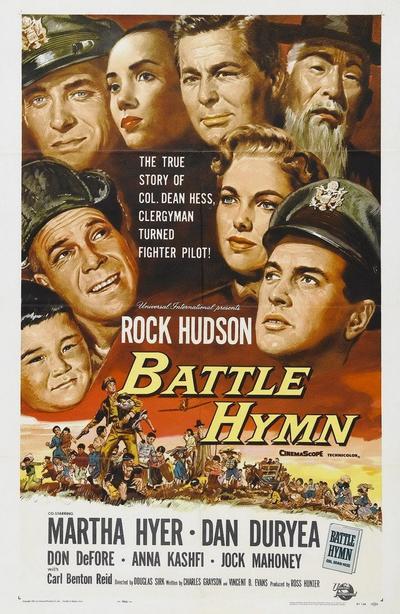 Synopsis wrote:
Battle Hymn was inspired by the true story of American minister Dean Hess, played here with rare sensitivity by Rock Hudson. A bomber pilot during World War II, Hess inadvertently releases a bomb which destroys a German orphanage. Tortured by guilt, Hess relocates in Korea after the war to offer his services as a missionary. Combining the best elements of Christianity and Eastern spiritualism, Hess establishes a large home for orphans. The preacher’s efforts are threatened when the Korean “police action” breaks out in 1950. Battle Hymn was one of several collaborations between Rock Hudson and director Douglas Sirk–though Sirk felt that Robert Stack would have been better suited to the role of Rev. Hess.

Peter Labuza wrote:
Like many classical Hollywood filmmakers, Douglas Sirk gained his reputation as an artist when “rediscovered” by auteurist critics and feminist scholars. Melodramas like All That Heaven Allows and Imitation Of Life were commercial hits, but critics of the era dismissed his focus on female domesticity through overexaggerated colors and performances. But one Sirk film became an immediate classic halfway around the world. Battle Hymn looks like total Oscar fodder by today’s standards: a Korean war drama based on a real-life pastor who saved the lives of hundreds of orphans. (It won a Golden Globe for “Promoting International Understanding.”) While forgotten in the United States, Battle Hymn has become a television mainstay to celebrate Commemoration Day in South Korea; many consider it a yearly tradition, like watching It’s A Wonderful Life at Christmas.

Sirk’s muse Rock Hudson plays Colonel Dean Hess, a pastor in Middle America who can’t shake nightmares of an orphanage he bombed in Europe during World War II. Unable to find solace in the Good Book, Hess reenlists as a pilot instructor to aid in the Korean conflict. The air combat, performed by the actual U.S. Air Force, carries a striking realism in its clarity of space, but the dominant action occurs on the ground. Hess notices small children sneaking around the camp to steal scraps of food in the background of the CinemaScope frames. Hiding his Christian profession, the pastor teams up with a local schoolteacher to protect and feed the young children in the middle of a war zone.

The film’s sentimental moments are occasionally cringe-worthy, but Sirk finds a complexity to the role of both race and religion through more quiet moments. These elements emerge through the forbidden romance between Hudson’s Hess and a local schoolteacher (played, problematically, by the India-born Anna Kashfi), and Korean-American star Philip Ahn as an elder providing guidance to Hess’s closeted faith. The film’s restrained tone in its performances and muted shades emphasizes the internal desires that bubble under the surface. The closest Sirk came to an Oscar-bait picture, Battle Hymn tones down his most common tropes, showing the director working in an alternative emotional register.