Maysaloun Hamoud – Bar Bahar AKA In Between (2016) 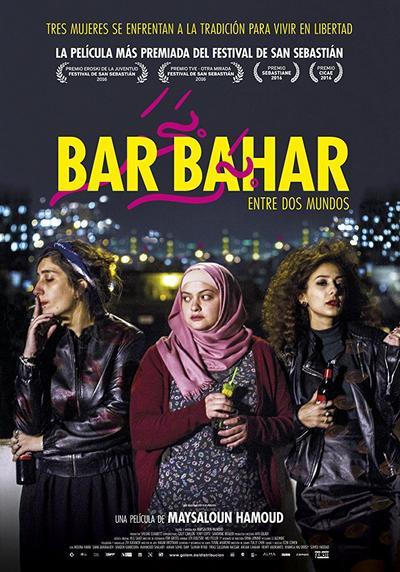 Quote:
Three Palestinian women living in an apartment in Tel Aviv try to find a balance between traditional and modern culture.

Quote:
Three Palestinian girls living in Tel Aviv are the vehicle for début Israeli director Maysaloun Hamoud’s exploration of the daily lives of women straining against the yoke of social convention in the Middle East in In Between. Their intertwining stories hit home with audiences to the extent that the film has bagged prizes at every major festival it has been shown at, including the NETPAC Award for best Asian Feature Film in Toronto and the Youth Prize, the TVE Another Look Award and the Sebastiane Award for best LGBTI film in San Sebastián. This week it is screening at the 32nd Haifa International Film Festival.

In Between is an intimate appeal to look more closely at the female experience in expansionist Israel, caught between modernity and westernisation on the one side and the traditional mores of the Middle East on the other. The film is produced by one of the chief standard-bearers for the feminist cause in Israeli cinema, Shlomi Elkabetz, who also wrote and directed it along with her sister Ronit Elkabetz (known for intelligent and antagonistic titles like 2014’s Gett: The Trial of Viviane Amsalem), who died recently.

The women are three very different personalities driven by a common desire. Laila (Mouna Hawa) is a self-assured young criminal lawyer who likes to spend her free time getting to know men and hanging out in the city’s underground bars. Salma (Sana Jammelieh) also finds her element in this scene, where she works as a waitress and DJ. On the surface the more laid back of the two, Sana’s docility and nonchalance is really a defence against the social opprobrium she faces on account of her homosexuality. The two women share a flat and one day they are joined by Nour (Shaden Kanboura), a university student several years younger than them and with a decidedly more religious and conservative outlook. From the moment Nour moves in, the differences between the three women, which threaten to cause tension at first, begin to fade into the background, eclipsed by the one thing they have in common, the one thing that a woman should not have to fight for: the right to live life on her own terms. Hamoud avoids an easy demonisation of religion (Christian as well as Muslim), paying more attention to the issue of sexism as she endeavours to give screen time to every vital facet of the feminist struggle. It’s a struggle that can never truly be won: not only must the women battle to overcome chauvinist attitudes, they must also contend with the often desperate problems faced by the younger generation in every part of the world.

Hamoud paints a portrait of their lives in the straightforward, light-hearted style of several US series that set out to define a generation (ranging, obvious differences aside, from Sex and the City to Girls). Ultimately, In Between falters due to a serious lack of complexity, narrative as well as technical, and a certain thinness of characterisation. However, as shown by its redoubtable haul of prizes, there is something about the film that strikes a sympathetic chord with its target audience—and that’s no small achievement.