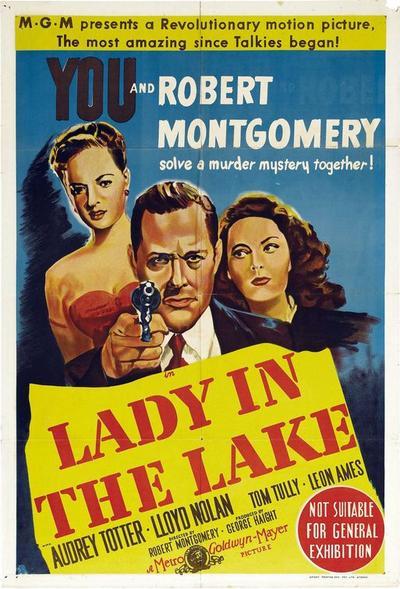 Synopsis:
The camera shows Phillip Marlowe’s view from the first-person in this adaptation of Raymond Chandler’s book. The detective is hired to find a publisher’s wife, who is supposed to have run off to Mexico. But the case soon becomes much more complicated as people are murdered.

Review:
Having seen “Lady in the Lake” yesterday at the Capitol, this corner now can confirm what the advertisements have been saying all along. The picture is definitely different and affords one a fresh and interesting perspective on a murder mystery. YOU do get into the story and see things pretty much the way the protagonist, Phillip Marlowe, does, but YOU don’t have to suffer the bruises he does. Of course, YOU don’t get a chance to put your arms around Audrey Totter either. After all, the movie makers, for all their ingenuity, can go just so far in the quest for realism.

As the star and director, Robert Montgomery permits the camera to do most of his “acting,” the result being that his image is only observed when it can naturally be reflected through a mirror. And, since the story is a first person affair, the camera on occasion observes the detective seated at a desk relating his tortuous and exciting adventures in locating the missing Mrs. Chrystal Kingsby.

In making the camera an active participant, rather than an off-side reporter, Mr. Montgomery has, however, failed to exploit the full possibilities suggested by this unusual technique. For after a few minutes of seeing a hand reaching toward a door knob, or lighting a cigarette or lifting a glass, or a door moving toward you as though it might come right out of the screen the novelty begins to wear thin. Still, Mr. Montgomery has hit upon a manner for using the camera which most likely will lead to more arresting pictorial effects in the future.

Since Raymond Chandler provided the story and Steve Fisher wrote the screen play, one can rest assured that the plot isn’t lacking in complications, romantic and otherwise. Marlowe, naturally, has a weakness for a pretty client and runs into plenty of trouble with the police and assorted strangers the deeper his investigation goes. Clues sprout and evaporate, or end up as blind leads, until the spectator is nicely but firmly confused. This bewilderment doesn’t extend so much to the identity of the lady found in the lake as it does to how Marlowe will go about solving the mystery.

Mr. Montgomery has the least acting to do, but his scenes are played with ease and conviction. His Phillip Marlowe is somewhat more cynical and sneering—a characterization which is developed more by the tone of his voice than anything else—than the previous conceptions of the detective we got from Dick Powell in “Murder, My Sweet” and Humphrey Bogart in “The Big Sleep.” You can take your choice of the three and still be happy. Audrey Totter, who is blonde and fetching, gets her first really important role in this picture and handles herself most credibly. Lloyd Nolan, Jayne Meadows and Leon Ames do very well by supporting roles, which permit them to develop sizable characterizations. 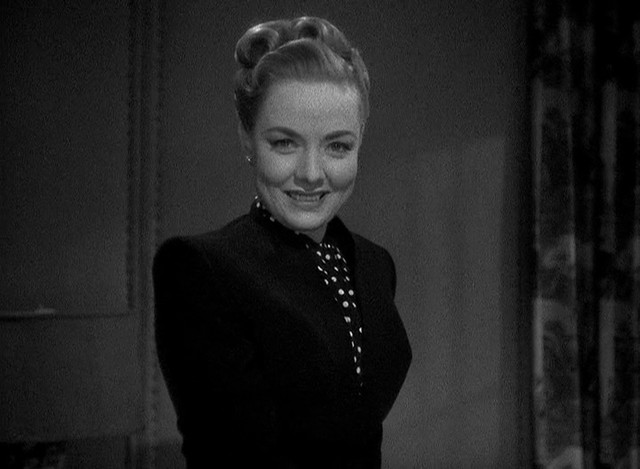 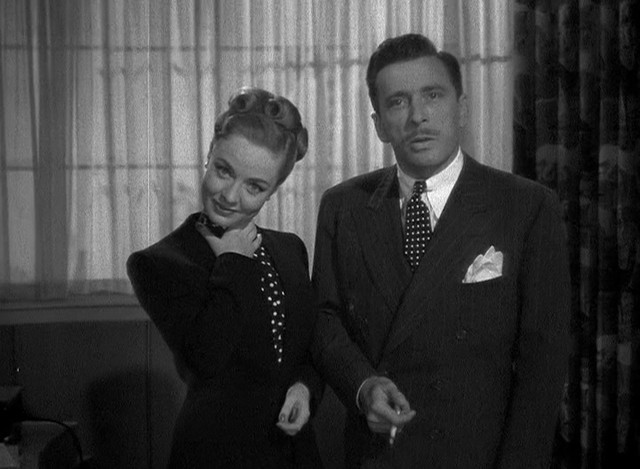 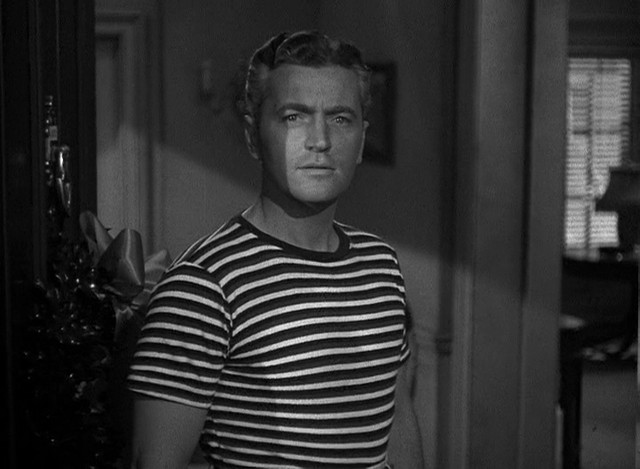 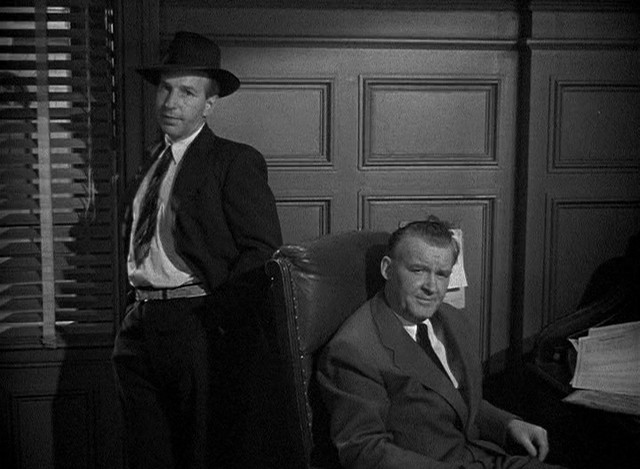 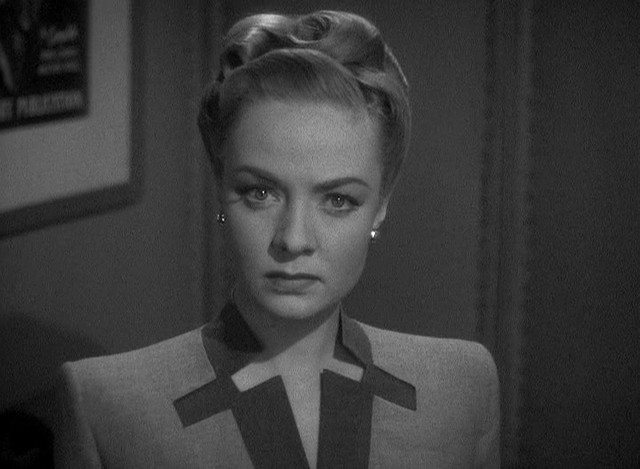 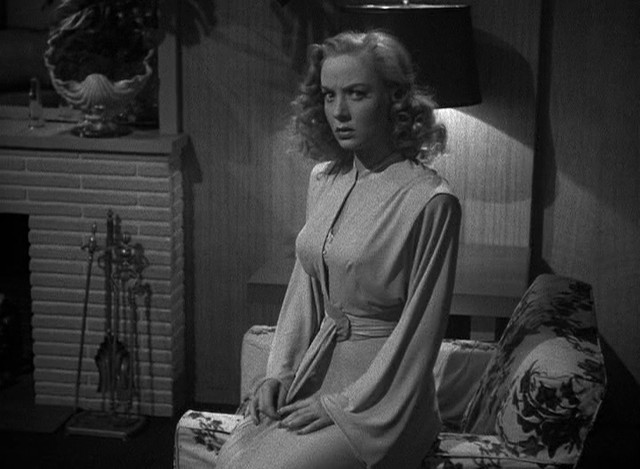 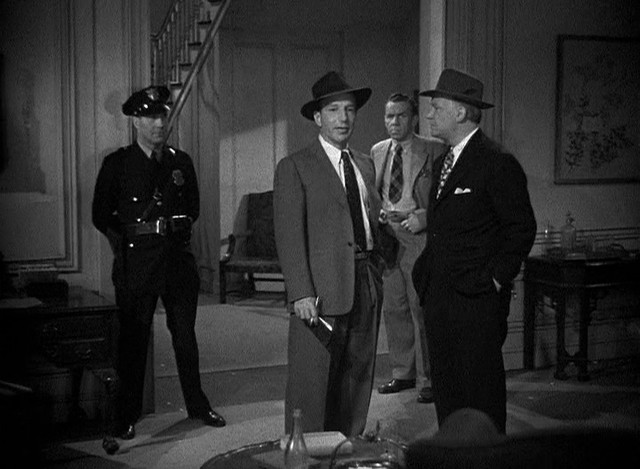 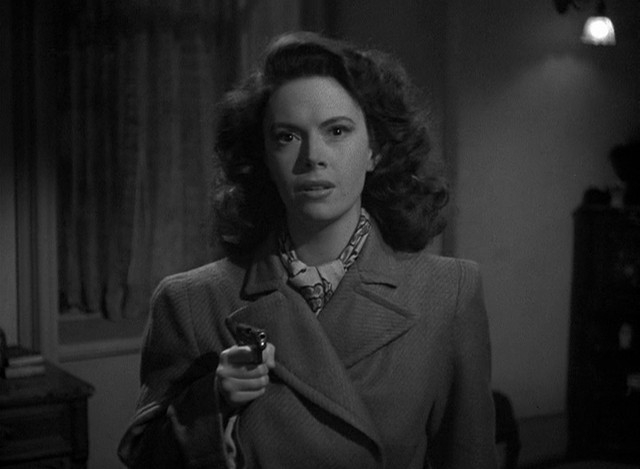