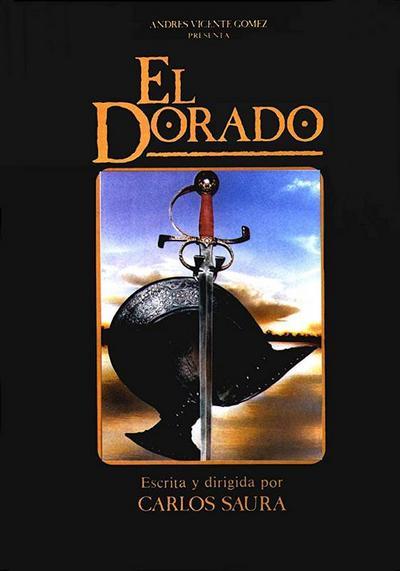 Saura is not exactly obscure and in need of featuring, but this movie isn’t watched too often. It has bad reviews, even Vincent Canby wanted more action saying “the Amazon has never flowed so slowly” (the Orinoco is part of the Amazon system). Saura was trying to tell a story about the hispanic world, going to the 500 year anniversary of the conquista. Just like Herzog he has a tale of obsession, but much more down to earth and realistic. Boring almost, not so popular. If you’re a Herzog fan or perhaps even liked 1492, you might suffer stimulus withdrawal symptoms when watching this one. If you like historical detail and a gritty sense of realism, you may not find it a perfect movie but one that goes a long way.
–flipfink

Quote:
Saura’s account of Spain’s quest for Peruvian gold differs from Herzog’s Aguirre, Wrath of God in intention and budget. Loopy Lope de Aguirre and his conquistadors sail themselves up a creek without gold or paddle, decimated by unseen assailants, hostile environs, exhausted provisions, and mad, merciless self-slaughter. Aguirre (the excellent Antonutti) is a tired 50-year-old way down the military pecking order; if voice-overs suggest he sees himself as God’s instrument, Saura portrays his murderous deeds asa product of the clashing forces of Spanish society. His attempt to demythologise this folie de grandeur within the conventions of the big budget epic (at $9 million, Spain’s most expensive film to date) excels in evoking the destructive effects of sexual jealousy, envy, greed and the Spanish obsession with death. But despite lush ‘Scope photography and the meticulous display of authentic armour and finery, the film is often oppressive, and too dependent on faces to communicate meaning, adding obscurity to something already complex and ambiguous. Not Saura’s best, perhaps, but a fascinating attempt to get to the heart of myths, men and history.