Quote:
Détective is one of Godard’s most engaging films, even though it has not been one of his most celebrated. Wheeler Winston Dixon described it as a “straightforward commercial venture,” the film Godard made “precisely in order to direct Je vous salue, Marie (1985).” But dismissing it in this way fails to recognize that, even in a film where Godard is forced to compromise, there is still much to be recommended. While Détective does tell a story of sorts, it is more than a mere narrative film. It still has many of the striking sound/image experiments and investigations into the forms, textures and affects of the plastic and temporal arts that we have come to expect from a Godard film. It also has a playful comic energy. In fact, as Dave Kehr notes, Détective has “all the lightness and zip of Godard’s sixties features.”

A lot of Détective’s ‘lightness’ and ‘zip’ comes from the way Godard both tries to tell a story as well as play with the forms of storytelling. Most of the action takes place inside the Hotel Concorde at Saint Lazare in Paris. This hotel is a great location for two reasons. On the one hand, it provides the opportunity for some glorious images. There are the ornate staircases, the spectacularly large luminous chandeliers, the elaborate foyer with its tiled floors and leather lounges, the dark, moody pool-room, and the flashing neon Agfa sign that can be seen from one of the hotel windows. Such images are, at times, reminiscent of an Antonioni or a Resnais film. On the other hand, the hotel is also a place where many different characters can come together, and multiple storylines become possible. Détective, in fact, proves to be a chaotic patchwork of plots and plotting, almost an excess of stories and storytelling.

The main plot lines follow the dreams and antics of four ‘family’-like groups who are holed up in separate parts of the hotel. The first family we become aware of revolves around Uncle William Prospero, the ex-detective of the film’s title, who lost his job when someone called The Prince was killed two years before. His nephew, Inspector Neveau (Jean-Pierre Léaud) and Neveau’s girlfriend Ariel (Aurele Doazan) – are trying to help him in his continuing quest to solve this murder. There are different problems for the unhappy wife, Françoise (Nathalie Baye), and her airline pilot husband Emile (Claude Brasseur), who spend time talking about love, money and their failed relationship. Françoise and Emile have arrived at this hotel in order to settle an old debt with Jim Fox-Warner (Johnny Hallyday), a pool-player and fight promoter. Françoise’s life becomes further complicated when she embarks on an affair with Jim. Jim shares a room with his boxing protégé Tiger Jones (Stéphane Ferrara) and their entourage. This room is at different times a makeshift gym, a brothel, an office and a place where a young girl practices music. Wandering around the periphery of these intersecting lives is a Mafia godfather (Alain Cuny) who seems to be on an endless journey around the lobby with an angelic looking young girl. He acts like a prophet, discussing philosophy and the practices of the Mafia to his henchmen and anyone else who will listen.

Like Godard’s other films, Détective is full of snapshots, quotations, pastiches, and allusions to the cinema. He references and deconstructs the conventions of a broad spectrum of mainstream genres, from crime stories, romances, gangster epics, film noir, fight films, melodrama and slapstick comedy. A lot of the energy and madness of Détective comes from the way generic elements collide in the one location – mixing up hotel detectives, unsolved crimes, boxers, mafia hoods and their sleazy associates, students, lonely souls looking for love, and young ingénues without parents. The actors come from different performance backgrounds and traditions and this further adds to the fusion of genres. Johnny Hallyday is a singer, Jean-Pierre Léaud is associated with the New Wave, Alain Cuny is one of French cinema’s elder statesmen, and Nathalie Baye and Claude Brasseur are recognised mainstream actors. The film also introduces two relatively unknown young actresses on the cusp of great careers, Emmanuelle Seigner and Julie Delpy. Godard’s documentary-like fascination with the faces of actors has been previously noted, and continues in this film in relation to Nathalie Baye and Jean-Pierre Léaud in particular.

In addition to its exploration of the narratives and the iconography of popular cinema, Détective is also a film that is interested in books. Books are everywhere. They are there as objects, part of the mise en scène. In a striking sequence, a great stack of crime fiction paperbacks are tossed unceremoniously to the floor, allowing us to see little more than their covers. Books are also there to be read. Françoise reads in the coffee shop. She also reads in bed. The money she is trying to claim from Jim she wants to use to open a bookshop. Jim carries around a copy of Conrad’s Lord Jim that his mother gave him to use whenever he was in trouble. “She told me that at every serious moment of my life I had only to open it at random, and I’d always stumble upon something of value to me. It’s been thirty years, and every time I open it, somebody comes in. I’ve yet to read a word” he says. This is also a film in which characters spend a lot of time reading passages from books out loud to each other. Ariel reads The Tempest with Uncle Prospero – their names are clear references to characters from Shakespeare’s last play. The mafioso’s associate reads out lines from The Sicilian, at his request. Meanwhile his young female companion appears to be studying a Time magazine expose of The Mafia. Passages from literary texts substitute for conversation, underlining Godard’s interest in the way images intersect with carefully crafted words and the modulations of voices. Much of what comes to pass between characters in this film involves books. So much so that Raymond Bellour was compelled to describe Détective as the exemplary reference film in Godard’s work with regard to books and literature.

Formal experimentation in Détective extends to the structure of the film itself. An obvious example can be noted in the way the credits don’t appear at the start or the end of the film but are, instead, interspersed throughout, contributing to the overall sense of disjunction and dislocation. But what is most striking about Détective are the experiments with the soundtrack. Détective is Godard’s first stereo film, and, with his collaborators, he takes the opportunity to play around with the music of Schubert, Wagner, Chopin, Liszt, Honegger, Chabrier, Ornette Coleman, and Jean Schwarz in surprising ways. There are times when the music functions emotionally, melodically, as it would in a genre film. But there are other times when the music is in the foreground, dominating the image, and creating a timbre and texture all of its own. In the very first scene of Détective we see two people, locked in an embrace, leaning against a wall, kissing. Next to them a solitary woman paces. She walks up and down, hesitates, and then keeps walking. This is the first image we see in Détective: an image apparently contrasting love and loneliness. It is a distant image, very grainy and very far away, defying our desires to get closer and really see what is going on. Then the image stops and starts and the fact that this is a recorded image becomes apparent. We hear voices on the soundtrack talking about these three people, and then we see the surveillance camera – the recording instrument – on the balcony. In the space of a couple of frames what appears to be an emotional moment becomes an image and then a mystery to be interpreted. The pleasure of this layered, mutating image, just like the pleasure of the ‘detective’ story, is to be found in its investigations rather than in its solutions, in its questions rather than its answers. (Anna Dzenis) 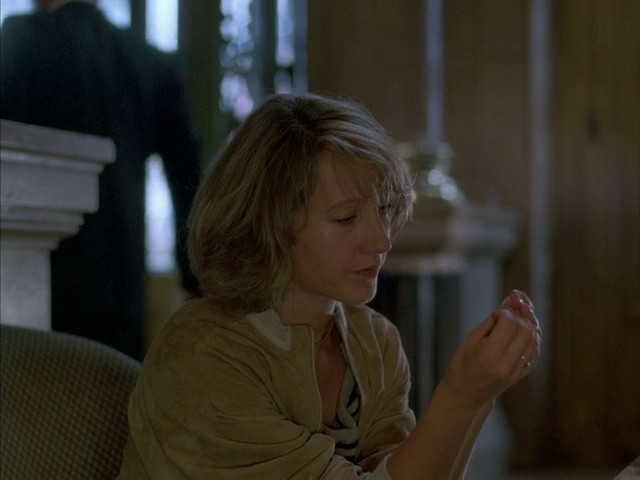 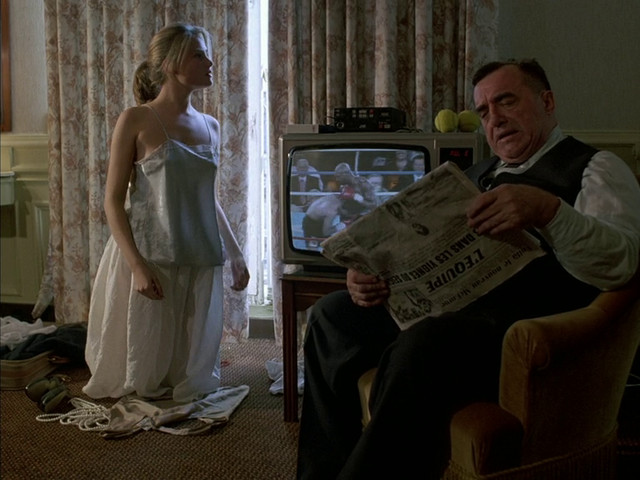 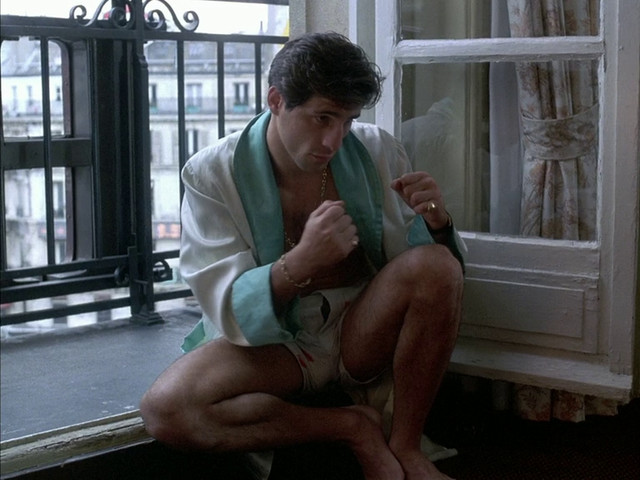 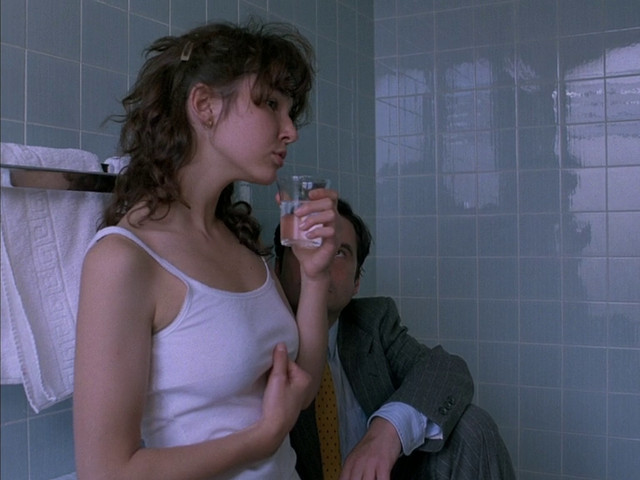 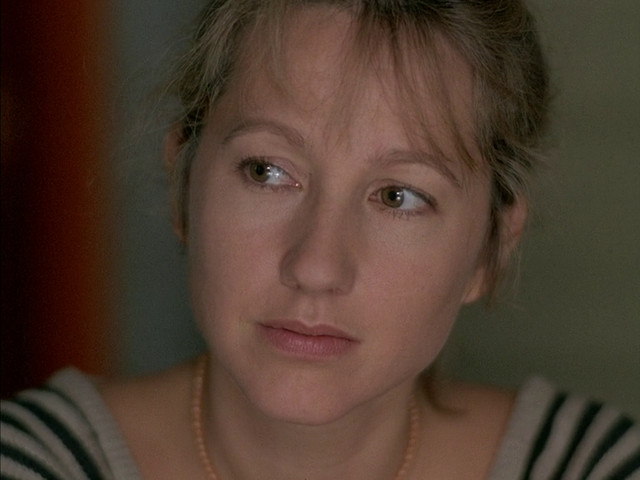 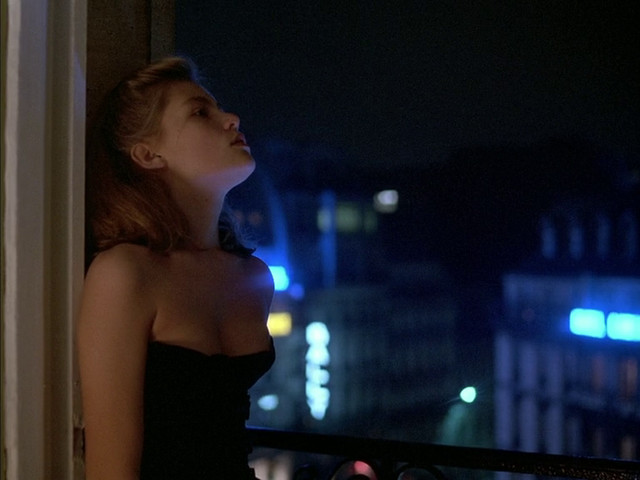