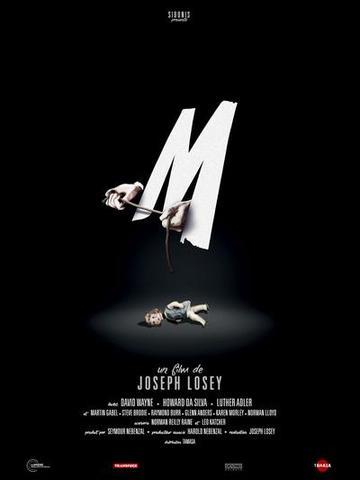 Quote:
Martin W Harrow (David Wayne) is a compulsive child-murderer who is tracked down and then placed on trial by the criminal underworld in Los Angeles. Syndicate chieftain Marshall (Martin Gabel) organizes his fellow crooks in order to bring “M” to justice, thereby keeping the police off their own backs. Found guilty by his “peers” and sentenced to death, “M” makes an impassioned plea for his life, explaining that he is unable to stop himself from committing his unspeakable crimes. 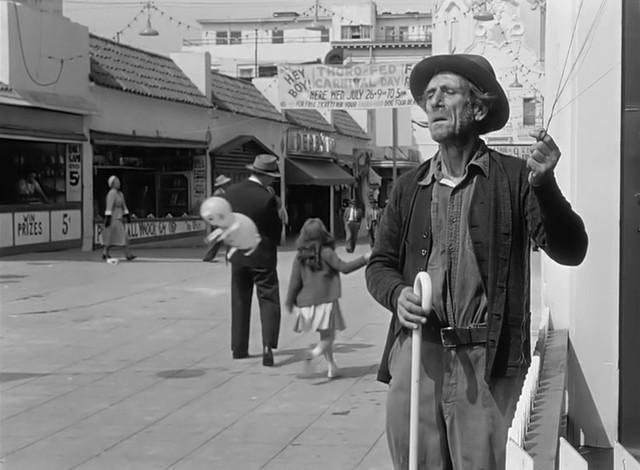 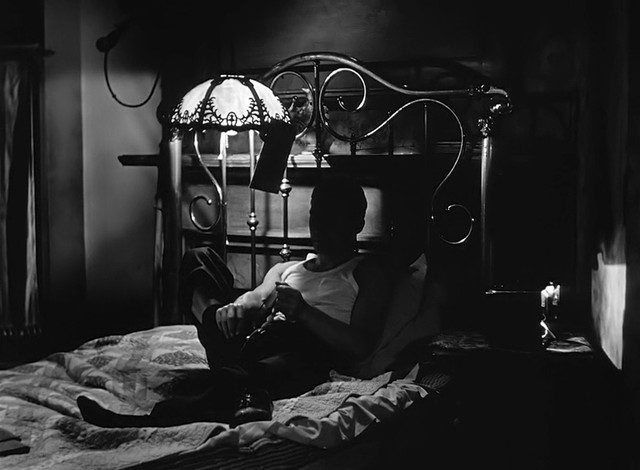 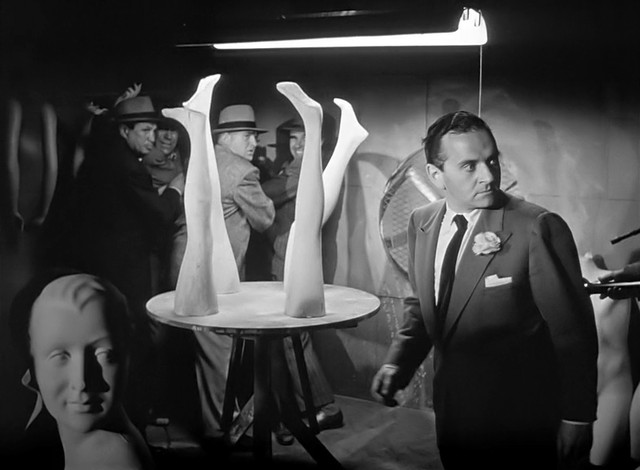 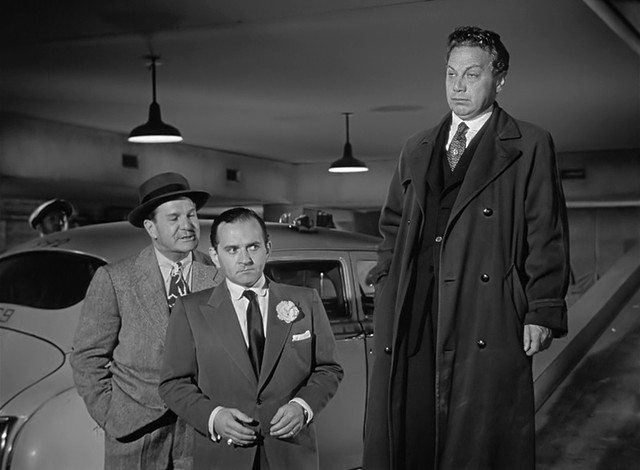 Quote:
A few years back, Tina Fey delivered one of the all-time great zingers when she reported on Saturday Night Live that Ben Affleck and Jennifer Lopez might star in a remake of Casablanca and predicted the new release would be “the perfect film for people who liked the original but wished it was terrible.”

The joke leaps to mind every time I hear that some Hollywood studio is foolishly remaking a beloved film, and it came back to me when I learned that Northwest Chicago Film Society would present the 1951 remake of Fritz Lang’s classic crime thriller M (1931). I’d known about the remake for years but never been eager to see it. How could it be anything but a disappointment? The Lang film is a masterpiece of German expressionism and a brilliant, complex social statement. Peter Lorre gives one of the great screen performances as the deranged child murderer being hunted by both the police and the criminal underground. I love M, and I’ve never wished it were terrible.

One can hardly write off the 1951 version, however, because it was directed by Joseph Losey, a gifted filmmaker in his own right and a man smart enough to know what a thankless job he’d taken on. Born in La Crosse, Wisconsin, and educated at Dartmouth College, Losey was a young man looking for theater work in Munich when he first saw M in 1931. Since then he’d traveled to the Soviet Union, where he staged Clifford Odets’s proletarian play Waiting for Lefty; made a name for himself in New York with a production of Bertolt Brecht’s Galileo, starring Charles Laughton; and gotten his start in Hollywood with idiosyncratic movies like the antiwar parable The Boy With Green Hair (1948) and the perverse mystery The Prowler (1951). Seymour Nebenzal, producer of the original M, had—like Lang and Lorre—fled the Third Reich and settled in Hollywood, where he came up with the idea of transplanting the story from Berlin to LA. Losey initially turned down Nebenzal’s offer to direct the remake, then accepted the assignment because he needed money—only to find that Lang was openly hostile to the project.

The imperious Austrian director, a great cultural hero in Berlin during the Weimar Republic, had watched his reputation fade in Hollywood, and he was not only creatively but personally invested in M. The screenwriter, Thea von Harbou, had been his illicit lover and then his second wife, collaborating with him on such silent classics as Dr. Mabuse: The Gambler (1922) and Metropolis (1927). Inspired by the real-life serial killer Peter Kürten—the so-called Monster of Dusseldorf—they developed the story for M as Lang’s first talking picture. Their relationship ended during production of The Testament of Dr. Mabuse (1933), after Lang came home and found Harbou in bed with a young Indian journalist. In the late 40s, when Lang heard that Nebenzal intended to remake M, he threatened legal action, but he had no screenwriting credit on the film, and the papers he claimed would establish his rights to the story had been lost after he escaped from Berlin. Nebenzal, having procured the rights from Harbou, simply ignored Lang and moved forward with Losey.

Whether Lang or von Harbou deserves the credit, the storytelling in M is so purely visual that one can follow long stretches of it with the sound turned down. Watching the remake, I was struck by how humbly Losey bows to the shot sequence of the original. In the original M’s famous opening, a mother in her kitchen glances at the wall clock; meanwhile her little daughter wanders home from school alone. The girl bounces a ball as she walks, and a nice man, his face unseen, befriends her, buying her a balloon from a blind street vendor. Growing fearful, the mother calls down the stairwell, turned into a vortex by a camera shooting straight downward. Medium shots show the little girl’s empty place setting at the kitchen table, and the abandoned ball rolling to a halt; a long shot reveals the balloon caught in the telephone wires. Losey copies this entire sequence; there are some minor adjustments (he inserts a shot looking back up the stairwell at the mother, and reverses the order of the rolling ball and drifting balloon), but they only remind you how beautifully conceived the original was.

Losey was interested in the script for its alternately chilling and pathetic protagonist, a victim of his own awful compulsions. There was some discussion of bringing back Peter Lorre to reprise his role, but by that time Lorre was known to American moviegoers as a rather droll figure in comedies like Arsenic and Old Lace (1944) and My Favorite Brunette (1947). Instead, Losey cast David Wayne, a little-known supporting actor who—in marked contrast to the pudgy, bug-eyed Lorre—was skinny, blond, and blandly midwestern. The original M implies that the killer has raped his little victims, but this notion was scrubbed from the 1951 script to appease the censorious Production Code Administration. By the 1950s, Freudian analysis was all the rage in Hollywood, and the new M includes a scene in which the killer, watched over by a framed portrait of a brutal-looking mother, models a clay figure of a woman and uses a coiled wire to slice its head off. Perhaps the only improvement on the character is the collection of little shoes that the cops find hidden in his apartment.

In the end, though, the most significant change in Losey’s M turns out to be the fresh urban locale dictated by Seymour Nebenzal when he launched the production. Lang was fascinated less by the criminal mind than by the criminal environment: the aspect of the Kürten case that had really caught his attention was a peripheral news story that Dusseldorf’s street criminals, cramped by the ongoing police dragnet, had set out to capture the murderer themselves, aided by tips from the city’s community of street beggars. Though the German M contained very little location photography, its sets connoted a closed, repressive world of cramped streets and iron gates. The action created the sense of a teeming underworld and a relentless police department, their easy coexistence in a corrupt Berlin disrupted by one little man who can’t control his urges. At the climax, the professional criminals apprehend the killer and subject him to a kangaroo court to plead for his life, the threat of mob violence hanging in the air.

That stifling sense of gated enclosure evaporates in the remake, which was shot on location in the wide-open spaces of LA. Much of the action transpires in the grimy Bunker Hill district west of downtown Los Angeles, a hilly area known for its long flights of stone steps and its funicular railway, “the Angels’ Flight.” Losey opens with a shot out the window of the rail car as passengers board, stepping over tied stacks of newspapers screaming child killer sought, before the killer boards and the car begins its ascent. A montage of the killer approaching various girls (one black and another Asian, reminding us where we are and how the lower classes are preyed upon) ends with him staring out into the blue horizon of the Pacific Ocean. A marvelously composed frame shows him getting a shoeshine before a picture window that overlooks an impossibly wide city street. Later the killer sprawls out on a park bench playing his creepy tin whistle, behind him a panoramic view of a main thoroughfare stretching back to the horizon.

Losey manages to conjure up some of Lang’s cloistered madness in the final chase sequence, which takes place inside the ornate Bradbury Building in downtown LA. (With its interior courtyard, exposed elevators, and webs of wrought-iron railing, the Bradbury is one of the great Hollywood movie locations, a architectual vision of intrigue.) Yet as Lang pointed out, M made no sense in sunny Los Angeles because, though there was plenty of poverty, there was no close-knit network of panhandlers as there’d been during the troubled last years of Weimar Germany. Losey actually agreed with Lang on this point, later observing, “I couldn’t believe myself in the idea of the whole underworld ganging up against the killer.” Nebenzal thought the story still worked because America had all sorts of isolated psychotics running around; in fact, the inner world conjured up by Losey and David Wayne feels less like the original M than it does the sun-washed nightmare of Psycho.

When the M remake was released, Lang showed up at a promotional screening and got into a shouting match with Nebenzal; according to film scholar Thomas Elsaesser, Lang “was not prepared to acknowledge” Losey as a member of the directing profession. Before long, though, Losey had much bigger problems than being on Fritz Lang’s shit list: three months after M was released, he left the United States for Europe to escape being subpoenaed by the House Un-American Activities Committee, which wanted him to explain his past membership in the Communist Party; subsequently, he enjoyed a long career in Britain and France but he never worked in America again. Three of his players on M—Howard Da Silva, Martin Gabel, and Luther Adler—were blacklisted, and M was greeted by right-wing picketers in Los Angeles that October. Everyone who lays a hand on the story seems to wind up running for his life.