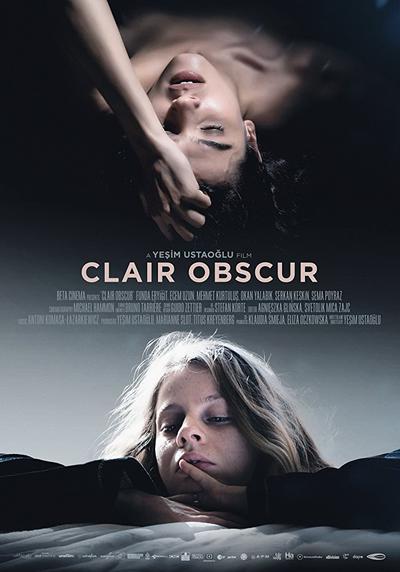 Quote:
Two Turkish women one oppressed by sexist traditions and one liberated by modern mores, have more in common than it would seem.

Quote:
Clair Obscur is another strong, universally relatable representation of the inner conflicts of contemporary women by award-winning writer-director Yesim Ustaoglu (Journey to the Sun, Araf. Somewhere in Between). The film was screened in the International Competition section of the 32nd Warsaw Film Festival.

Set on the Turkish Mediterranean coast, the film follows two protagonists, shown in very contrasting environments. Chenaz (Funda Eryigit), a liberal-minded woman, has a successful career as a psychiatrist, but feels trapped in a relationship that appears enviable from the outside but lacks emotional fulfillment. While Elmas (Ecem Uzun) is a young girl who feels abandoned by her family. She has been forced into an arranged marriage, which has subjugated her personality to the rules of religion and tradition.

The parallel stories are handled beautifully, and intersect one another. They shape the very different characters of the protagonists, who both fight for the right to escape loveless, suffocating relationships and prioritise their own needs over societal expectations and the demands of their partners. The two women meet in hospital. Chenaz helps Elmas to overcome a traumatic experience by encouraging her to go through the painful process of confronting her fears by looking at things in perspective, something that Chenaz herself finds difficult to achieve. A scene in which Elmas struggles to imagine a conversation with her mother, captivatingly performed by Uzun and shot strikingly with a panning camera, is especially powerful.

Ustaoglu masterfully uses the natural setting of the Mediterranean coast to reflect the two women’s inner state of mind, captured by the mesmerising cinematographic style of Michael Hammon, with whom the director worked on Araf. Somewhere in Between. The unrestful sea and storms invade the space, encouraging the women to take control over their own nature. Female sexuality is at the centre of this dark, poetic tale. While for Elmas sex is a painful experience that needs to be endured in order to have children, Chenaz feels trapped in a sex life that is dictated by her partner’s desire for control and self-absorption. The very sensitive issues tackled by the film are valid, not only for Turkey, but for women all around the world: what women are to demand from a relationship and the need to stop apologising for asking more from life when feeling neglected and (ab)used.