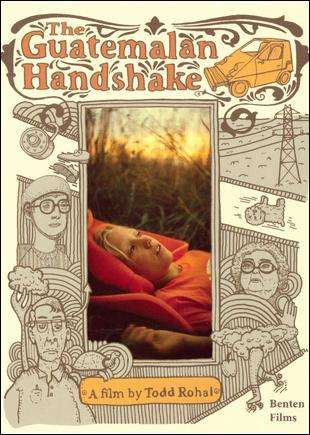 Pieces of the mystery begin to come together as Turkeylegs sets out to find her missing friend. Cars drive circles in the dirt, a woman attends her own funeral, the sun rises sideways and an orange vehicle trades hands again and again. Everything eventually culminates in a massive demolition derby that throws all of the characters into different directions.

This feature debut by writer/director Todd Rohal is filled with bizarre satisfactions: a forlorn woman alone in a rural Chinese restaurant with a feast in front of her; a 10-year-old-girl narrator named Turkeylegs whose unabashed sweetness fills even the film’s darkest nooks; and Will Oldham’s performance as Donald Turnupseed, like a beleaguered Napoleon Dynamite with bottomless emotional complexity. Demonstrating a knack for finding profoundly original scripts, Oldham joins a cast of unpaid local talent in Rohal’s unlikely ensemble piece.

What plot exists—revolving around Donald’s disappearance from the sleepy town—is negligible. In part, this is because Oldham’s character is so deeply haunted that his absence isn’t much different from his already questionable presence, which occupies the screen with separate but equal force. Aside from Oldham’s anti-star power, the film pleasantly recalls Robert Altman’s Nashville and David Byrne’s True Stories in its vignette-filled structure, each character gradually shedding quirk until his or her most basic needs are revealed, however obliquely. Ken Byrnes—tender and taciturn as Donald’s father—spends the entire film trying to get back into his tool shed (Donald having run off with the key), finally opening it in time for the climactic demolition derby.

The Guatemalan Handshake is willfully obscure. Its title remains mysterious. Flashbacks and real time entwine as a dozen flawed weirdoes unveil their equally knotted issues. But it’s perhaps accidentally dense, the size of the ensemble pushing its audience’s collective RAM to the max. Nonetheless, it’s a remarkable first feature for Rohal, who has previously directed several shorts (including 2001’s Hillbilly Robot) and some music videos, as well as acted in mumblecore mainstay Joe Swanberg’s Hannah Takes The Stairs. Indeed, The Guatemalan Handshake is not unrelated to this latest lo-fi genre, reaching for a similar type of slowly processed catharsis. But where mumblecore’s emotional realism often matches the blandness of reality, Rohal gleefully engages in redeeming flights of fancy.

Shot on 35 millimeter, the film played the festival circuit upon its 2006 release but never found wider distribution. Certainly, it’s not for all audiences, but there are enough LOLs to balance the WTFs. Rohal’s gift isn’t in dialogue so much as capturing a moment—the face of forlorn Ethel Firecracker (Kathleen Kennedy) as she searches for a dog whose fate seems known in the film’s first minutes, and her surprise when she sees her own obituary in the newspaper. Even minor characters—like Ivan Dimitrov’s seemingly one-note Ivan—find their answers during the dust-filled derby.

Though Rohal is ultimately unsparing, the film’s frame remains positive. Uplifting would be the wrong word, but the final sense is something far better than despair.