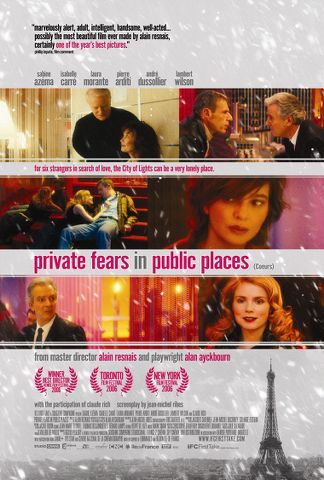 Synopsis:
In Paris, six people all look for love, despite typically having their romantic aspirations dashed at every turn.

For the second time in his career Alain Resnais turned to an Alan Ayckbourn play for his source material (having previously adapted another play for Smoking/No Smoking), and remained close to the original structure while transferring the setting and milieu from provincial England to the 13th arrondissement of Paris (contrary to his usual preference).

The film consists of over 50 short scenes, usually featuring two characters – occasionally three or just one. Scenes are linked by dissolves featuring falling snow, a device similar to one which Resnais previously used in L’Amour à mort (1984).

Several of Resnais’s regular actors appear in the film (Arditi, Azéma, Dussollier, Wilson), and he was joined by his longstanding technical collaborators in design and editing, but he worked for the first time with cinematographer Éric Gautier.

Nicole (Laura Morante) is looking for a new apartment for herself and her fiancé Dan (Lambert Wilson), who has recently been fired from his position as a career soldier. She is very critical of him for not being more aggressive in finding work. Nicole’s real estate agent, Thierry (Andre Dussollier), is a cheerful man who is quite taken with the quiet beauty of his co-worker Charlotte (Sabine Azema), a Christian who lends him a videotape of her favorite religious program that features theologians and artists talking about the hymns and songs they love most. Thierry is shocked and turned on when the tape also includes some scenes of Charlotte doing erotic moves.

Dan, an alcoholic, spends most of his time in a hotel bar confessing his sadness to Lionel (Pierre Arditi) whose ailing and bed-ridden father causes him heartache with his bellicose behavior. He hires Charlotte to look after him in the evenings when he works; she revels in the challenge and comes up with her own special solution to soothe the old man’s anger and rage. Thierry’s shy and lonely sister Gaelle (Isabelle Carre) goes out each night in an attempt to hook up with the right man and eventually connects with Dan, who has taken a mutually-agreed upon break from Nicole. They are both pleasantly surprised to meet each other through a dating service.

Private Fears in Public Places is based on a play by Alan Ayckbourn. The French film director Alan Resnais seems to be having a lark with this light-hearted study of urban loneliness. In an interview he has stated:

“What struck me when I read the play was the characters’ constant determination to shake off their solitude, with all the obstacles that implies. The sense of solitude is irreversible. There’s no cure for the desire not to be alone. It’s the eternal quest for happiness. It’s easy to believe it’s within your grasp and hard to accept that it is a figment of your imagination.”

There is a chill in the air and snow as these characters reach out for each other and struggle with their private demons. The most mysterious and fascinating character is Charlotte who reads the Bible when stressed out and believes that the Devil is always at work tempting her to do the things that express her hidden sexual proclivities. She is the only one in the drama who truly shows a compassionate nature.

This stylish and sensitive drama about the furtive quest for love by six Parisians is well worth experiencing.
by Frederic and Mary Ann Brussat – spiritualityandpractice.com