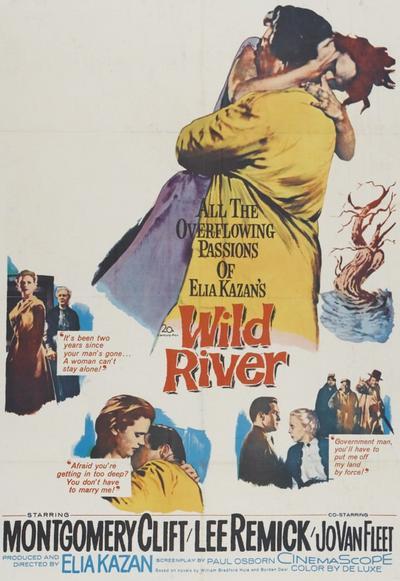 Quote:
DESPITE a tempestuous title, “Wild River,” which came to both the Victoria and Sixty-eighth Street Playhouse yesterday, emerges as an interesting but strangely disturbing drama rather than a smashing study of a historic aspect of the changing American scene.

In focusing his color cameras on the South and the Southerners affected by the Tennessee Valley Authority in the early Nineteen Thirties, producer-director Elia Kazan, oddly, enough, distracts a viewer with a romance that shares importance with the social and economic upheaval that unquestionably is closest to the heart of this movie matter. In following two courses simultaneously, the potential force of “Wild River” has been diminished.

Mr. Kazan, it must be stressed at the outset, not only knows his subject intimately, having worked on it, intermittently, since 1955, but also has filmed it thoughtfully, compassionately and with many touches of meaningful artistry. One wonders if the use of two novels, William Bradford Huie’s “Mud on the Stars” and Borden Deal’s “Dunbar’s Cove,” as source material for Paul Osborn’s script, might have been an embarrassment of riches. Suffice it to say the competition of young love and the effects of progress on old customs proves to be a dichotomy that is insidiously intrusive.

The curious fact is that both sections of the flavorful, vernacular-filled screen play have been given professional treatment. The story of a proud, 80-year-old matriarch, Ella Garth, who refuses to leave her island domain which is soon to be flooded, is a strong but dispassionate commentary on genuine native dignity, human rights and local folkways. Ella Garth, the film makes touchingly clear, is not merely a contankerous old fuddy-duddy. She is well aware of the benefits of this proposed change—the electricity that will make life easier and the bulwarks against the constant floods that took their toll of the population and the land regularly. But this is her home and farm — “good bottom land”—that she helped her husband clear in which her family has been buried for generations.

There also is no valid quarrel with the idea of one of the T. V. A.’s dedicated young men, who, in the course of a sympathetic attempt to win Ella Garth to the governmental way of thinking, would meet, come to know and fall in love with her pretty, widowed granddaughter. It is a natural facet of the saga but obviously not important enough to demand equal time with the film’s major theme.

Since Mr. Kazan is a dedicated man, too, he profited by taking his troupe down to Charleston, Tenn., the Hiwassee River, from which you can see the Great Smokies, and the town of Cleveland on Lake Chickamauga to capture authenticity. The cameras of cinematographer Ellsworth Fredericks have brought to life the charm of the rolling, wooded countryside. Striking, too, is the sparse, native harmonica tunes of the background score and the black-and-white, newsreel-like opening sequence in which a semi-articulate farmer most effectively recounts the fatal effect of a flood on his family.

Mr. Kazan also received far more than mere lip service from his principals and supporting players, some of whom actually are Tennesseans. List as a finely shaded, genuinely emotional portrayal that of Lee Remick, as the young, pretty mother, who, at long last, finds surcease from longing in her love for the serious, youthful T. V. A. man from the North. As that understanding governmental minion, Montgomery Clift is reserved but a mite more animated than he has been in recent films. Although he vacillates at first, he does suddenly show his profound affection for the widow and her shy but endearing youngsters. As the unreconstructed octogenarian matriarch, Jo Van Fleet, a personification of the artistry of make-up, contributes a forceful characterization that embodies much of the pride and tragedy involved in her predicament.

Albert Salmi adds an impressive delineation of a smiling but tough bigot who roughs up the T. V. A. man; James Westerfield, Jay C. Flippen and Jeff Bess (a Nashville radio announcer) are Tennessee cotton farmers to the core as Miss Van Fleet’s sons. And Robert Earl Jones, as her dignified Negro hand who refuses to leave her side, and Frank Overton, as Miss Remick’s harassed local suitor, properly point up social divisions.

Mr. Kazan deserves real credit for not being partisan about the socio-economic aspects of his story. The similar accent on its romance dilutes its drama.