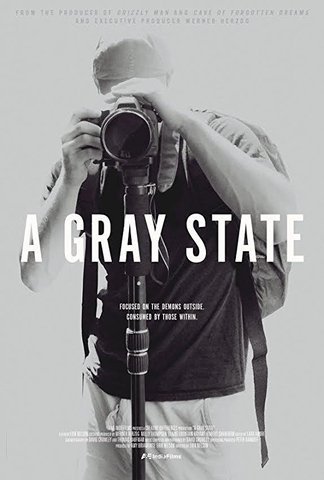 Synopsis:
In 2010 David Crowley, an Iraq veteran, aspiring filmmaker and charismatic up-and-coming voice in fringe politics, began production on his film ‘Gray State.’ Set in a dystopian near-future where civil liberties are trampled by an unrestrained federal government, the film’s crowd funded trailer was enthusiastically received by the burgeoning online community of libertarians, Tea Party activists as well as members of the nascent alt-right. In January of 2015, Crowley was found dead with his family in their suburban Minnesota home. Their shocking deaths quickly become a cause célèbre for conspiracy theorists who speculate that Crowley was assassinated by a shadowy government concerned about a film and filmmaker that was getting too close to the truth about their aims.

Review:
Erik Nelson’s documentary A Gray State offers a thorny parable of the hatred and paranoia gripping America. Obsessed by the military as a teenager, David Crowley joined the army with a friend out of high school in 2004. Crowley served in Iraq and was later redeployed against his will in Afghanistan, which were hellish experiences that soured his conventional sense of patriotism. Speaking into one of his own cameras, Crowley says that America’s presence in the Middle East is “reprehensible.” Returning to Minnesota with his wife, Komel, and their daughter, Raniya, Crowley embarked on fundraising for his Gray State, a fictional film about the devolution of the United States into martial law, headed by the federal government. Based on the posters and trailers for the film that Crowley assembled over a several-year period, FEMA was to be the primary antagonist.

Awareness of Gray State peaked when Crowley appeared on Infowars, hosted by right-wing blowhard Alex Jones, whom Crowley seemed to regard as a hero. As years passed, it became clear that Crowley, though remarkably driven and organized, was better at branding his Gray State than making it. Like many artists, he wanted to live in his art, though he was also self-consciously mercenary. A recording included in this documentary confirms this suspicion, as Crowley says that he doesn’t even have to write the film: “I just have to have the idea and people will start to do things. And I will make money off them.” Crowley’s conspiratorial fantasies eventually reached a ghoulish end: In January 2015, Crwley and his wife and daughter were found in their house shot dead, the victims of an apparent murder-suicide. Ever the fastidious control freak, Crowley appears to have assembled a soundtrack for the event, which was playing in a loop on a computer at the scene of the crime.

The story of Crowley’s rise and fall as a celebrity of fringe politics offers a staggering amount of material to unpack, with something for people of all political persuasions. For the fanatical right wing, Crowley’s life can be utilized as an illustration of the savagery of the federal government hell-bent on destroying the livelihood of the “common man.” And for this left-leaning critic, his life is a disturbing and evocative distillation of the conspiratorial nepotism that’s eating away at this country, inspiring people to wrap themselves up in bitter quasi-fictions that foster ignorance of menaces that hide in plain sight.

Identifying himself loosely as a libertarian, Crowley villainizes the government while yearning for standard capitalist success—a conflict that constitutes a hypocrisy that’s familiar to the party, which seeks to achieve a “self-sufficiency” that’s unimaginable without the social stability of a tax-driven government. Yet Crowley’s disgust with the government will resonate with liberals, particularly his contempt for America’s infrastructure of endless warfare, and his certainty that this country will be destroyed by politicians who’re owned by plutocrats. Crowley isn’t easily squared then.

Of course, a desire to rationalize and personally codify conflicting or ambiguous events is the very appeal of the sort of conspiracy theories that drove Crowley’s celebrity, which offer the promise of closure under a cover of hopelessness. Crowley’s acolytes refuse to accept that he killed his family and himself, as this architect of a nonexistent cult film must have obviously posed such danger to the federal government as to merit assassination. Nelson interviews “citizen investigator” Greg Fernandez, who says: “I don’t give a crap about credibility at all. Credibility means nothing to me. What I care about is truth.” This statement is terrifyingly coherent in our post-truth world. Fernandez seeks a vision of events that confirms his own innate prejudices, and he could be speaking for millions of people in an age in which news comes in multiple flavors in accordance with one’s biases.

Nelson had remarkable access to Crowley’s immense web of recordings, social media posts, and multiple hard drives’ worth of journals and paraphernalia. In the tradition of literary journalist Alec Wilkinson’s terrific New Yorker profile “Death of a Dystopian,” which features Nelson and most of A Gray State‘s participants, the filmmaker straddles a fine and admirable line between lurid sensationalism and sober humanism. Nelson doesn’t retrospectively force Crowley to fit a predetermined thematic square; instead, he uses his subject as a barometer of America’s escalating terror, uncertainty, and self-loathing. Ironically, Nelson finds common ground among the far left and right as well as the middle: the conviction that we’re sliding into a moral abyss.

The film nimbly juggles new interviews with posthumous glimpses of Crowley’s creative output. Crowley’s Gray State trailers are chillingly accomplished, fashioning a nightmare of paramilitary suppression that’s laced with imagery that evolves to accommodate the director’s shifting religious convictions, with heavy-handed yet haunting allusions to the French Revolution. Crowley appears to be a natural filmmaker for both good and bad, as he’s confident in his vision and profoundly gifted in the art of manipulation. In one of A Gray State‘s most unsettling scenes, two financiers listen to a recording of Crowley as he details his methods of subtly overpowering them.

Nelson’s greatest flourish as a documentarian is to simply allow subjects in the present day to interact with Crowley’s art and diaries—a device that has the effect of dragging psychosis and blossoming insanity out into the cathartic sunlight. On one hand, Gray State was a delusion that used real events as artful fertilizer; on another, it was a sincere autobiographical portrait of a tortured and intelligent mind, which was better connected to the id of the American populace than most respected political pundits. Nelson paints a studious and exacting portrait of an aspiring prophet who ate himself and his family alive. The title—of both Crowley and Nelson’s films—is bottomless. 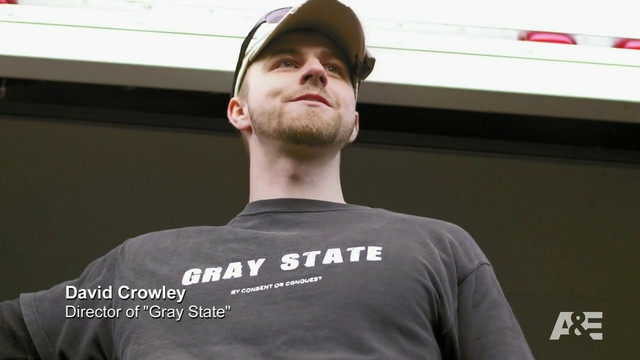 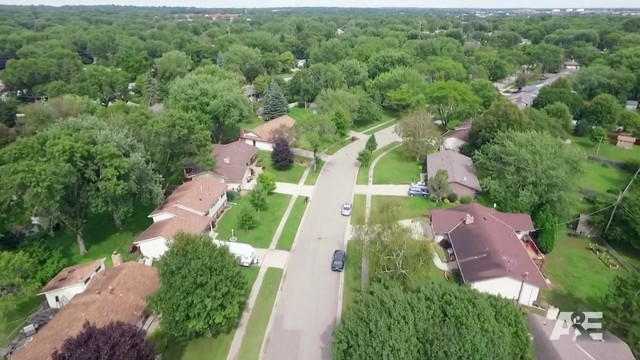 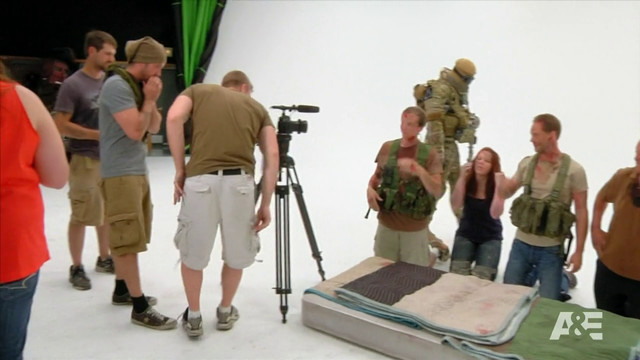 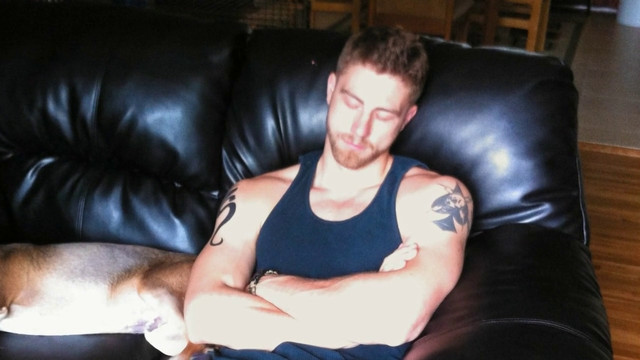 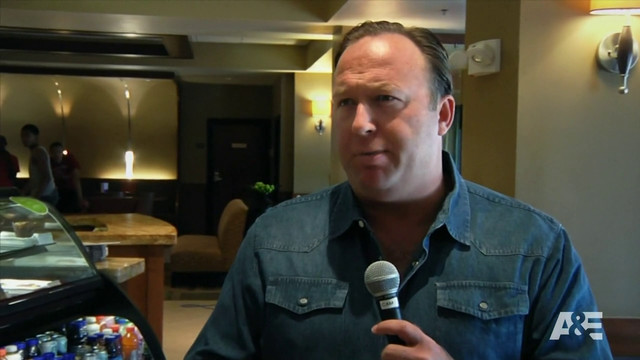 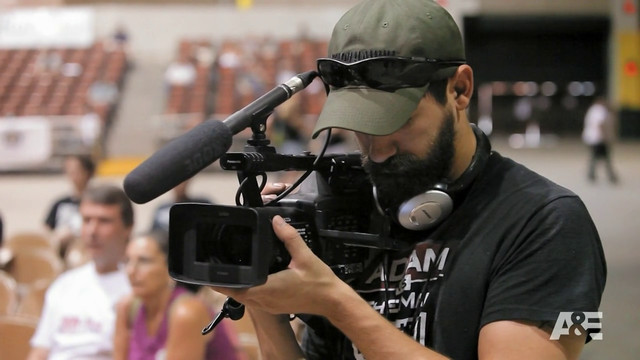 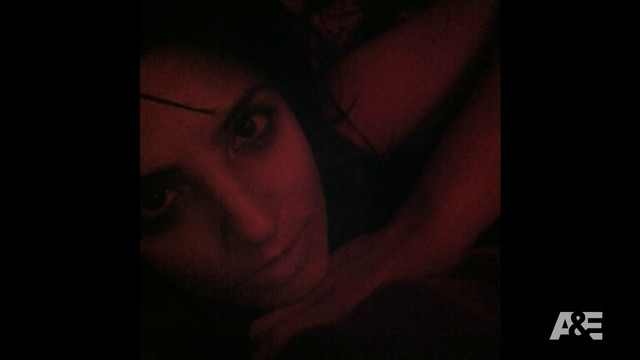 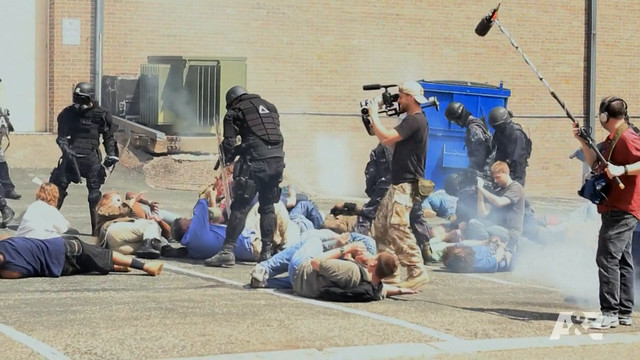