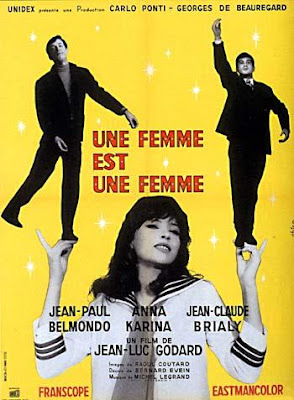 “Director Jean-Luc Godard’s deceptively blithe tribute to the musical comedy features Anna Karina as an exotic dancer who decides that it is time for her to have a child. When her lover refuses to commit to the decision, she turns her romantic attentions to his best friend. This being a Godard film, the straightforward story serves as a framework for improvisation and stylistic experimentation, allowing for odd interludes and unexpected images. Rather than the sometimes alienating, dense intellectualism of later Godard works, Une femme est une femme offers aesthetic pleasure through luxurious visuals and a charming musical score by Michel Legrand. Against this bright backdrop, Karina proves particularly fetching, capturing the film’s frolicsome mood in an unforced manner. While not one of Godard’s most groundbreaking or influential films, Une femme est une femme is one of his most appealing and pleasurable efforts.”

Before the comedy, salute to the spectators.

And now the comedy…

A woman is a woman

She wants a baby because… it’s the day, the very day. Science says so, ‘preshysely’.
He doesn’t want a baby for the same exact (opposite, i.e. the same) reason.
Besides there’s a race next Sunday…
Will she dare ask somebody else to make a baby to her ?

For real or for fake, but in both cases, equally beautiful and moving,
She…

♪ why everybody’s crazy about me ♪
♪ the truth is that ♪

and he’s a great sportsman also